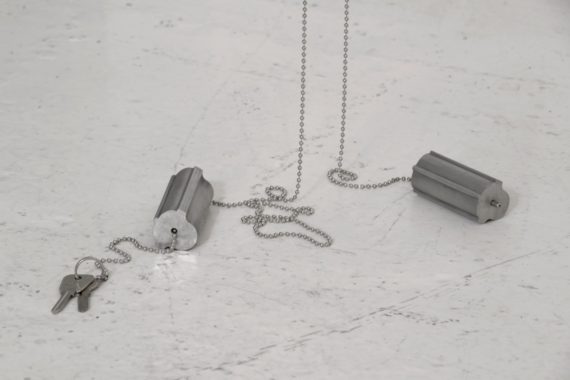 Among the works is a series of ‘semi-functional micro-sculptures’ titled lowkey, that consist of locks, bunches of uncut, skeleton and jiggler keys, chains and small machined aluminum objects whose shapes are inspired by unrealised architectural proposals for the Speke estate. From Hunt’s queer perspective, these sculptures evoke ideas of unmet plans, blending in – or standing out – from one’s environment.

Several a-n members show work in this expansive group exhibition, which explores notions of care, repair and reuse. Carl Clerkin presents The Beasley Brothers’ Repair Shop, a pop-up based on a traditional east London repair shop, which hosts workshops and creates new, functional furniture using broken and rejected components. Meanwhile Ekta Kaul, who has been an a-n member for 10 years, shows a newly commissioned embroidered ‘storymap’, which explores her lost connection with her grandmother who grew up in Calcutta.

Among other member highlights is a heavily repaired Norwegian sweater by Celia Pym, who is known for her transformative visible mending of textiles, and Acts of Care by Bristol-based Linda Brothwell, a series that ‘performs acts of individualised care’ in public spaces, using specially handmade tools and traditional craft techniques to repair items including pub signs, brickwork and benches.

The exhibition takes as its starting point Gustav Klimt’s 1905 painting Three Ages of Woman, which depicts a trio of nude figures: a hunched, elderly woman who holds her head in her hand, alongside a young woman cradling a child. In Talbot’s new works, the oldest figure is presented as a woman with agency, in an imagined future environment, where humans must face the consequences of late capitalism, and rethink ancient power structures and attitudes to nature.

This new commission by Hetain Patel commemorates forgotten workers of the cotton industry at the site of Sir Richard Arkwright’s water-powered cotton mill, ‘the birthplace of the modern factory’, which drove the industrial revolution.

Patel’s large-scale sculpture consists of a circular mesh structure, woven with portraits made from donated fabric, which was transformed into yarn with help from members of the local community. The symbolic portraits represent the women and children that made up most of Cromford Mills’ workforce, members of Patel’s own family who picked cotton in Kenya and India, and the enslaved labour of the wider cotton industry.

PRONOUNced and Drawn to Painting

Phoenix Art Space presents two exhibitions that feature a-n members. PRONOUNced platforms artists whose voices are ‘unheard, obscured or othered’ because of their gender identity, sexuality or how they look. The project, which includes work by Midlands-based artist, educator and a-n member De’Anne Crooks, presents installations, wall-based works and a screening programme that draws attention to the stories of marginalised people.

Making of the Sausage

Division of Labour presents a solo exhibition by Bolton-based a-n member Andee Collard as part of A Modest Show, the official artist-led event taking place across venues in Manchester during British Art Show 9.

Collard uses self-built CNC machines to create mechanised, analogue drawings and paintings of a range of subjects from flowers, cat flaps and CCTV images to abstract works. Collard’s interest in technology results in a continual evolution of his practice as he develops the hardware and software he uses to make his work. In ‘Making of the Sausage’ Collard explores the links between art and cookery, while allowing the public to view, through livestream, his creative process.