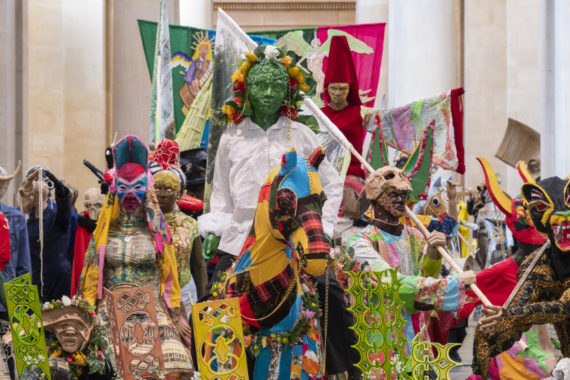 a-n member Sonia Boyce has won the prestigious Golden Lion prize at the La Biennale di Venezia 2022 for her sound installation Feeling Her Way in the British Pavilion.

Tinted videos of the performers sit on vibrant, tessellating wallpapers and among golden 3D sculptures, to create highly reflective surfaces and immersive spaces. Experimentation and collaboration is at the heart of this work.

Boyce said: “This [award] is momentous, and utterly overwhelming. The performers in Feeling Her Way are stunning. They connect us in ways that are joyful, soulful and necessary. Venice is living up to its reputation as the city of dreams.”

Six artist-makers present new work in porcelain, wood, metal, tapestry and found objects, made in response to garden designer Piet Oudolf’s ideas and planting approach, which can be seen in the landscape of Oudolf Field at Hauser & Wirth Somerset.

Meanwhile jewellery designer Romilly Saumarez Smith takes ‘metal detecting finds which have lain lost and unseen beneath the soil for hundreds of years and fills them with new life above the ground.’ The artist transforms discarded objects from the past – crushed thimbles, cutlery handles, belt buckles – by combining them with precious materials such as silver, gold, coral, seed pearls and diamonds, creating ‘mythical worlds through intricate artistry’.

Sculptor and a-n member Hew Locke fills Tate Britain’s neoclassical Duveen Galleries with nearly 150 life-sized figures made by hand from a huge range of materials. The colourful and unsettling parade of characters are costumed in a collage of symbolic images and objects including Caribbean carnival characters, militaria, momento mori and obsolete share certificates.

Locke’s most ambitious work to date takes as its starting point the grand architecture of the gallery and Tate’s historical association with a sugar industry based on the foundations of slavery and colonialism. Creating connections through time, geography and culture, The Procession references history and contemporary concerns including the climate crisis, Black Lives Matter and the invasion of Ukraine.

The Procession evokes ideas around migration, trade, travel, pilgrimage, carnival and protest – themes that Locke has explored throughout his career. Locke comments: ‘What I try to do in my work is mix ideas of attraction and ideas of discomfort – colourful and attractive, but strangely, scarily surreal at the same time.’

This exhibition, which includes works by a-n members Charlotte Prodger and Sekai Machache, brings together more than 50 historical, modern and contemporary works that span ‘over one hundred years of social transformation, innovation and individualism.’

Paintings, drawings, assemblages and photography by 30 artists explore themes such as human relationships, encounters with places, familiar objects and structural forms. Works by women working in the mid-20th-century such as Joan Eardley and Wilhelmina Barns-Graham sit alongside contemporary pieces by Turner Prize winner Charlotte Prodger and Alberta Whittle, who is currently representing Scotland at the Venice Biennale.

Glasgow-based Machache presents the film Light Divine Sky 1, in which the artist performs in the open, ancient landscape of the Scottish Highlands. Machache moves through peatbogs wearing a custom-made dress that echoes the image of sky reflected in water, in a work that encompasses themes including African metaphysics and cosmology, ritual practice, Celtic folklore, Gaidhlig language and Black Scottish identity.

Until 3 July 2022, The Sainsbury Centre for Visual Arts, University of East Anglia www.sainsburycentre.ac.uk

At Quarry Bank, one of the UK’s most significant industrial heritage sites, a-n member Jen Southern presents newly commissioned work that explores the legacy of the industrial revolution.

The National Trust estate includes an 18th century cotton mill, the grand house of its wealthy owner, workers’ housing, landscaped gardens and woodland. Running through the site is the Rover Bollin, which has inspired Southern’s five short films, created with the help of machine learning technology. Each film focuses on a different aspect of Quarry Bank’s landscape and its relationship to water, and is shown in a river-like installation inside the historic mill.

Gathering Downstream considers historical environmental impacts and prompts questions about how to create a sustainable future. As Southern comments: “The work will ask, what can humans and machines learn about the impacts of climate change and ecological emergency from the trees, meadows, moss, rocks and river at Quarry Bank?”

The first major solo exhibition by British-Ghanaian artist and a-n member Larry Achiampong features a newly commissioned feature length film titled Wayfinder. The artist’s most ambitious moving image work to date is set during a pandemic and follows a young girl’s journey across England, travelling from north to south through landscapes and settings including Hadrian’s Wall, a housing estate in Wellingborough, a café in Bethnal Green, the National Gallery deserted at night and Margate’s seafront.

Wayfinder is exhibited as part of an installation that includes a giant map of the UK which visitors can explore and interact with, echoing the themes of the film and creating ‘a dialogue about class and economic exclusion, belonging and displacement, cultural heritage and the meaning of home.’

Alongside his own work, Achiampong has curated a display of paintings by JMW Turner and collaborated with Turner Contemporary to create a gaming room, offering visitors a chance to play some of the video games that have influenced Achiampong’s practice.

Celebrating 50 years of the Turnpike Gallery, this group exhibition gathers together 50 drawings and works on paper by artists from across the UK who have worked with the gallery over its history.

On display is an array of drawings that reflect on the past and look to the future. a-n member Layla Curtis shows her ink on tracing paper work Globe Tracing No. 1, while Bolton-based Andee Collard and Mersey-based Leo Fitzmaurice (both a-n members) also have pieces included. Contemporary works sit alongside those of Turnpike alumni including Eduardo Paolozzi, David Hockney, L S Lowry and Henry Moore – the latter was the subject of the Turnpike’s first exhibition half a century ago.