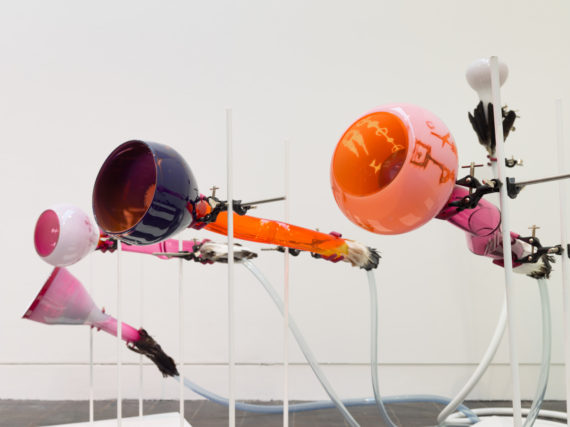 A Strange Kind of Knowing

This touring exhibition of work by 13 artists, including Susan Hiller and Tai Shani, explores ‘the land, seasonal cycles, natural phenomena, intuition and nuance’, through works on paper, paintings, sculpture, video and installations that draw on alternative knowledge connected to the natural world.

a-n member Chantal Powell, who creates sculptural works influenced by her interest in psychology, Jungian theory and alchemy, presents a series of maze-like ceramic objects whose surfaces feature red and green-speckled glazes and delicate drawings of organic and serpent-like forms.

Kate McMillan, who is also an a-n member, shows a series of collages entitled My Body is A Cave (2021). Based on photographs taken along the north coast of Cornwall of caves and crevices, these torn images appear bodily and organic, suggesting fragmented pieces of memory or portals to elsewhere.

By Hand, on Foot

Croatian-born a-n member Vlatka Horvat presents her first solo exhibition in London, which centres on 365 works on paper. Based on photographs taken by the artist on her daily walks during 2021, each image is transformed by collage, cuts, tears and drawing: a skate park becomes a volcano, erupting with pink smoke; a grassy playing field under a blue sky is sliced horizontally and flipped upside down, abstracted into green and blue stripes.

Through such alterations Horvat’s work considers the physical and social relationships between bodies, objects, nature and the built environment. Everyday scenes are reimagined, some become threatening, others joyful, and all suggest the possibilities of imaginatively reconfiguring the spaces that we inhabit.

Photographer, a-n member and disability rights advocate Tony Fisher presents a solo exhibition of work from his ongoing project Only the Lonely?, which explores themes of isolation, loneliness and depression through portraits and nature photographs.

Begun before Covid-19, the consequent lockdowns brought new resonances to the project, as Fisher documented people and places during his exercise walks. “I was engaging with people at a distance who were keeping up their spirits, from a dark place, into celebration and hope,” he explains.

Reflecting both the vulnerability and sense of community that he observed, Only the Lonely? captures moments of connection and creativity, as well as the artist’s own lived experiences of loneliness, reminding us that for many people, isolation will continue to be part of daily life beyond lockdowns.

We Gather and Collect: international art fair for contemporary craft

This month sees two Crafts Council highlights in London, with the exhibition ‘We Gather’ in its gallery and ‘Collect’ taking place at Somerset House.

Meanwhile, ‘Collect’ presents collectable contemporary craft and design from emerging and established artists and makers across the world. Highlights include embroidery by a-n member Cecelia Charlton presented by Chicester-based Candida Stevens Gallery, and hanging textiles by Christian Ovonlen who is represented by Intoart.

Taking Artist Support Pledge (ASP) from Instagram to the physical gallery space, this exhibition includes over 300 works, from artists across the UK and worldwide, and includes numerous a-n members.

a-n’s CEO Julie Lomax was one of the selectors who chose from more than 3600 submissions, All works are for sale directly from the artists via their Instagram accounts.

Four a-n members have been selected for this showcase of newly commissioned work by artists and makers whose work spans glass, textiles, digital modelling, silversmithing and sculptural installation.

Hulme-based Jahday Ford explores the relationships between the digital and handmade, displaying a series of large, coloured glass vessels alongside an interactive piece that illuminates through LED sensors that react to visitor proximity.

Anna Berry, who lives and works in Milton Keynes, presents new sculptural work A Fall from Grace, a porcelain and concrete structure based on repeated cone forms.

London-based Cecelia Charlton has created a triptych of Bargello embroideries inspired by the Three Fates of Greek mythology. Her largest work to date, each human-sized piece employs a unique combination of colours and intricate stitch patterns to create abstract motifs.

Long-standing a-n member Vicky Higginson, who is based in Edinburgh, presents a set of glass healing devices that imagine the treatment of emotional ailments such as ear trumpets ‘to hear things left unsaid’ and a pestle and mortar ‘to break down overwhelming thoughts’.

Hayward Gallery Touring’s landmark exhibition continues its national tour, opening in Wolverhampton following its first leg at Aberdeen Art Gallery. Curated by Irene Aristizábal and Hammad Nasar, and split across two venues – Wolverhampton Art Gallery and University of Wolverhampton School of Art – the exhibition focuses on how we live with and give voice to difference.

The show features 34 artists, including a-n Artists Council’s Hetain Patel and a number of a-n members such as Abigail Reynolds, Mark Essen, and Paul Maheke amongst others. The broad spectrum of work investigates identity from an intersectional perspective, the show exploring coexisting identities such as class, ethnicity, gender, and sexuality. These works are presented in critical dialogue with Wolverhampton’s cultural history which has been shaped by the diverse populations that came to work and live there during the post-war period.

Focusing on work made since 2015, British Art Show 9 reflects a precarious moment in Britain’s history, which has brought politics of identity and nation, concerns of social, racial and environmental justice, and questions of agency to the centre of public consciousness.