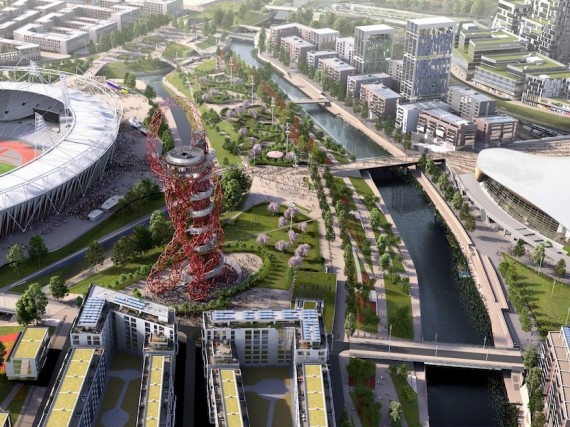 Grand projects, like the Olympics, inevitably take place on contested ground. The opportunity for national grandstanding sits uneasily with more human-scale concerns like inclusiveness, local engagement and legacy. Never neutral, they reflect the dominant ideologies, power brokers and anxieties of the era, and London 2012 is no exception.

These were the core themes discussed at the Olympic Art Review on 3 July, chaired by Lewis Biggs (former director of Liverpool Biennial and curator, Folkestone Triennial 2012) and explored through the prism of the officially commissioned Art in the (Olympic) Park and the unregulated art practices taking place in boroughs around the park.

Getting most media attention so far is Anish Kapoor’s gargantuan Arcelor Mittal Orbit, but it sits alone as an independently funded project developed by the Mayor of London’s office. It’s an expensive piece of corporate advertising and nationalistic posturing, designed to be visible to the far-away BRIC country economies. Regardless of any artistic merit it may or may not possess, it’s a brilliant example of willy-waving on an epic scale.

But there are 40 other art works and participatory projects that have been commissioned in and around the park, led by Sarah Weir, who first became involved when she was director of Arts Council England’s London office. Back in 2004, Weir had two members of staff seconded onto the bid team to advocate for, and build in the role of arts and culture, eventually resulting in the creation of an Arts and Culture team within the Olympic Delivery Authority (ODA).

She began her presentation by holding up the first evaluation of this culture programme, titled Square pegs in round holes: “This is exactly what it was like doing art, in a construction company, which is also the Olympics,” she said. “This is the most difficult thing I’ve ever done in my life by a long chalk.”

Without Weir’s influence, all the bridges, security fences and underpasses would be concrete and grey. But she has also managed to achieve a public art programme and strategy that incorporates many examples of good art and good practice. This includes open competition for all but four of the commissions, leveraging in £11m of public money, mostly from existing construction budgets but including £2m from ACE, and importantly, looking well beyond the 2012 event horizon.

She is already actualising legacy projects, including taking on The Open Air Art School in neighbouring Tower Hamlets as a three-year project, and commissioning art for 2014, 2015 and 2016.

Unusually for the sector, the strategy is thinking forward 25 years when the Olympics will be a distant memory and 35,000 new homes will have been built on the site. Issues of cultural distribution, liveability and maintenance are already being considered.

One of the Art in the Park projects was an artist’s residency, awarded to Neville Gabie. Working over several months, he saw his role as “an opportunity to be a critical observer of what was going on, and to be an independent voice”.

With that approach, Gabie created several artworks that explore the enormity of the physical spaces and that celebrate the input and lives of workers on the site. This includes the very moving film Twelve Seventy, featuring Sam the Turkish bus driver with a passion for swimming, who as part of Gabie’s film is enabled to swim – beautifully – in the Olympic pool.

But it took months of negotiation to make this happen, and Gabie found the tensions between the command and control culture of the ODA and his integrity as an artist difficult: “The Arts and Culture team understood and respected my autonomy as an artist, but as far as the ODA were concerned, I was an extension of their PR team. Protecting my independence and autonomy as an artist was a consistent challenge. There were issues with every project.”

One of Gabie’s park projects, Unearthed, has challenged the persistent rhetoric that the Olympic park area was a derelict polluted wasteland, a brownfield site without significant community or history.

In fact the opposite is the case – it has a huge social, creative and industrial history. Among other things, from 1986 it was the home of the biggest artists’ studios in Europe, in the former Yardleys Perfume Factory, a complex that can claim artists Grayson Perry and Rachel Whiteread among its alumni. “Why does the presence of one thing have to obliterate the history of the other?” Gabie asked.

This theme, of exclusion and lack of acknowledgement, became the core question for artist Dr Hilary Powell, who decided to document what happened in the local area “when this juggernaut arrived on the doorstep”. Local people were excluded from what became an enormous building site from April 2007 when three-metre tall blue barriers were erected around the 11-mile park perimeter.

In an inspiring presentation Powell demonstrated how locally-based artists made small but perfectly formed interventions around this perimeter, for example, Point of View, “the London Olympics’ first public viewing platform” – a set of six steps aligned with the fence, allowing a view over it.

It stayed in position for 60 hours before being removed by ODA officials. In response to the increased CCTV surveillance, Jim Woodall made a “counter-surveillance” control room aimed at the Olympic border.

Other projects, of which there have been many, make reference to the displacement of 1,500 residents, 200 businesses and 5,000 jobs in the process of assembling the land needed to build the Olympic Park. In one project, Powell has metaphorically bottled the spirit of the area by making annual vintages of Sloe Lea Gin since 2008, with depleting stocks year on year as the sloe harvest reduces in the area.

Unintentionally, that enormous blue fence has mobilised artists living around it to draw attention to its symbolic meaning through artist-led, organised and intellectually engaged creative interventions. These projects deconstruct its functions as barrier; as protector of appropriated public and private space; and as an overt “area of exception” with a private security force with its own rules and powers.

This is a narrative that doesn’t often get a public airing and it’s one to take seriously, as is the body of work associated with it.

In collaboration with Dr Isaac Marrero, Powell has gathered these examples of “small voices of dissent that were easily wiped out” into a substantial book, The Art of Dissent: Adventures in London’s Olympic State. This book collects texts and interventions that unpack “the mega-event consensus” by “challenging the physical, legal, economic and symbolic structures that fuel the Olympic machine”. It deserves to be widely read.

This conference was important in that it dug beneath the propaganda to a reality that is not often aired in mainstream discourse. The deconstruction of how macro-level politics, brand management, serious money, national pride and propaganda come together in a sometimes noxious mix may not be new but is always worth re-stating.

As Lewis Biggs summed up in the close of day plenary: “This whole thing is not about culture. It’s about real estate, and money, and power, and a whole lot of other things, but it isn’t about culture”.

This article was originally published on Guardian Culture Professionals Network.