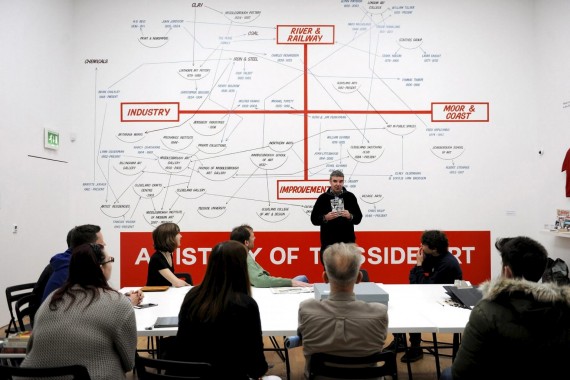 Middlesbrough Institute of Modern Art (mima) has taken a radical approach to curating with its current exhibition Localism.

‘User-generated’ from a series of workshops and open calls with local residents, the project is a chance to both take stock of the artists who have lived or worked in and around Middlesbrough and Teesside, as well as to look at the role creativity has played in building the region’s identity, industrial landscape, and culture.

Crowdsourcing ideas is part of director Alistair Hudson’s vision to create a ‘useful museum’ that is ‘relevant locally, nationally and internationally’.

“Localism is a story about what happens when the big ideas of art hit a very particular place like Middlebrough, how a town built on making uses art to grow and define itself. We also want to ask pertinent questions about how art can work in ordinary life, as part of the way we live; what and who a museum is for?; what is local and who decides it?; and how do we influence the wider world?”

A History of Teesside Art (top)

This ‘family tree’ of artists connected to Middlesbrough and Teesside grows across the gallery walls in parallel with an immersive environment that introduces the region’s social context by examining connections between the areas cultural landmarks. Here, Robert Nichols discusses his much loved Middlesbrough FC fanzine, Fly me to the Moon in front of the mural.

Middlesbrough was home to one of the most innovative potteries of the Victorian era with entrepreneur John Harrison and designer Christopher Dresser producing over 2,000 different shapes of ceramic ware in the company’s short life span from 1879-89.

Emily Hesse and James Beighton’s project New Linthorpe aims to recapture the spirit of the historic pottery whilst reflecting the character of modern day Middlesbrough. The display shows the historic company’s now highly collectible pieces alongside the contemporary works they have inspired. Common Ground also includes making space where Hesse invites visitors to work with the local Linthorpe clay. The results are glazed and fired and integrated into the display.

Stockton-on-Tees based gallery Peg Powler presents two display cases, one devoted to Middlesbrough’s ‘outsider artist hero’ Shaun Elliott and other to artists with a connection to Teesside whose works are part of the gallery’s permanent collection.

Artists AJ Garrett and Rebecca Little launched the gallery with a curated series of month long exhibitions from an empty space within Green Dragon recording studios between 2010-11. The programme centred around alternative and underground talent from the Teesside area. The gallery now operates from various locations and sites around the region, and other areas of England, with recent projects including a fanzine festival in Middlesbrough and a secret history walk in Stockton-on-Tees.

Middlesbrough-born Glynn Porteous (1935 – 2003) trained at the Slade School of Fine Art, London, in the 1950s before returning to his home town where he was appointed as artist/model maker for the Department of Engineering at the County Borough of Teesside. Initially inspired the ‘Kitchen Sink’ movement, he continued to paint images of local people and places in his spare time. Retiring from the post in 1979, he was subject of a solo exhibition at Middlesbrough’s Municipal Art Gallery in the same year and exhibited locally up until his death, with his last exhibition taking place at Kirkleatham Hall Museum in 2001.

Alongside paintings, ceramics, photographs and films, Localism also includes artefacts, archival records and personal ephemera. The exhibition continues to grow as public meetings and debates, and a series of a workshops and making sessions, invite more people to add to and shape its narrative.