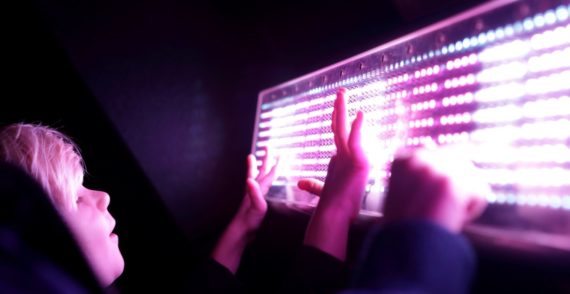 55 works by artists from 15 countries have been selected for the longlist of The Lumen Prize for Digital Art 2016, an international open competition with a total prize fund of $11,000, now in its fifth year.

Longlisted artists are in the running for a number of prizes – including the $3,000 Gold Award and several $1,000 media-specific awards – as well the chance to be included in the Lumen Prize global tour, which in previous years has visited cities such as New York, Shanghai and Hong Kong, as well as venues around the UK. Prize winners and artists shortlisted for the tour will be announced in September.

A number of UK-based artists and artist duos are included in the longlist, six of which are featured here. All longlisted works are eligible for The People’s Choice Award, an online vote that opens in August.

Jason Revell, Icon (above)
Jason Revell’s images of sculpted forms  appear as if photographed in a studio or gallery setting, but are in fact entirely fictitious objects rendered in CGI.

Revell says he is interested in the contradictory meanings that are instilled in these forms once they are placed within the visual framework of photographic documentation, and the conflict that lies in our initial acceptance of these images as photographs of real objects.

“Once the visual deceit has been realised, the meaning of the images becomes unclear,” he explains. “The intent is to make the viewer question their initial interpretation and then re-engage with the image afresh.”

The work features four custom-made super bright LED emblazoned synthesisers that have been designed to use a carefully selected musical scale so that they remain perfectly in harmony with each other.

“There are no wrong notes!” explains Lee-Delisle. “These musical instruments remove all barriers – now everyone can express their individual musicality.” 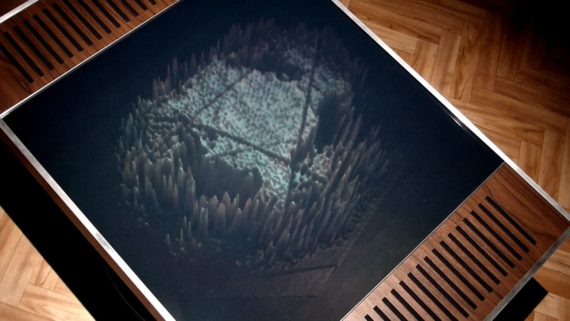 “The form presented within the hologram is derived from my explorations and experiments within video feedback,” says artist Mark Eaglen. “This has subsequently been through several responsive processes until it has reached the screen of the sculpture, seeking to break through and feedback into the impossible space [that] surrounds it.”

The site-specific installation includes a cardboard model house sitting on a plinth and a virtual reality headset which the visitor is invited to wear.

Szirtes and Nicholls explain that the use of virtual reality is designed to “transport visitors into an alternate reality where they can experience art in new and extraordinary ways”.

Ara’s work, which shows the spot where Mendieta died an hour after the removal of the body, was created based on witness accounts, meteorological, astronomical, and other collated data. 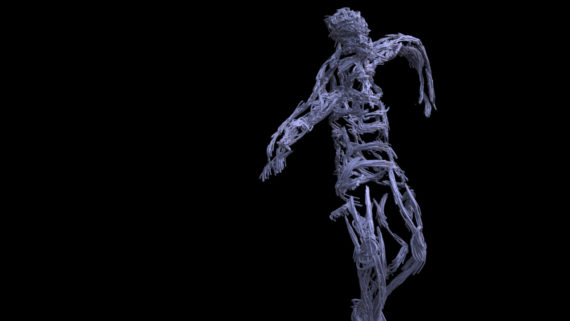 They explain: “The motif of psychological change in the art work is in reference to Karl Jung’s theory of the anima, the inner feminine side in man; and animus, the inner masculine side of women. Jung identified 4 stages of development of the anima and animus, all of which are represented in the video.”