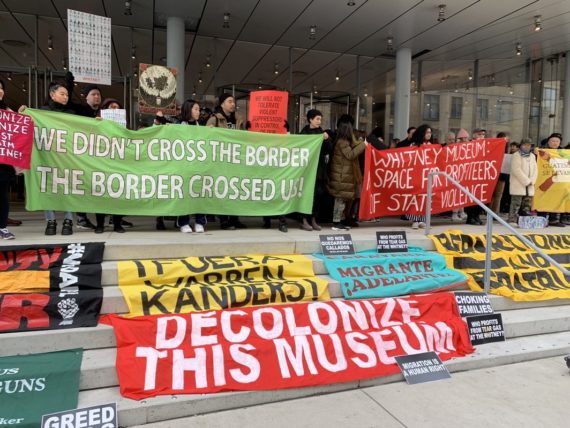 They were calling for the removal of the Whitney board’s vice-chair Warren B. Kanders, the owner of Safariland, a company that manufactures tear gas canisters and other products which have been used against asylum seekers at the US–Mexico border.

Protesters were carrying banners sporting slogans such as ‘Warren Kanders Must Go’ and ‘Whitney Museum: No space for profiteer of state violence’. Art Forum reports that around 250 protesters entered the museum after initially gathering outside.

The protests came after an open letter signed by nearly 100 Whitney staff demanded answers regarding Kanders involvement with Safariland. Whitney director Adam Weinberg’s written response has been dismissed as inadequate by staff and protesters.

Stating that the Whitney “cannot right all the ills of an unjust world, nor is that its role”, Weinberg continued: “As members of the Whitney community, we each have our critical and complementary roles: trustees do not hire staff, select exhibitions, organize programs or make acquisitions, and staff do not appoint or remove board members.”

Lottery funding distribution must be returned to people say campaigners A new briefing paper says that it is only by ‘rebalancing’ cultural funding from arts councils to local groups that cultural democracy can be achieved, reports Arts Professional.

Produced by the Movement for Cultural Democracy, Rebalancing & Redistributing National Lottery Funding states that local groups should be given control over how money raised through the National Lottery for ‘Good Causes’ is spent. It argues that this would ensure a “fair and equitable” access to cultural resources and prevent decisions being made by “anonymous and unaccountable quangos”.

Describing the current system as “centralised and top-down”, it states that it is “increasingly difficult for local communities, arts organisations and artists to access funding”.

It adds: “We argue that a people-powered cultural democracy can only be achieved if there is a significant rebalancing of cultural funding.”

New London gallery to show work by only artist known to have worked secretly under Islamic State Stories Art Gallery in Mayfair is aiming to champion artists who take a non-political approach in their work to challenge violent stereotypes of the county.

It will show work by Jumaa Nazhan, who trained at the Institute of Fine Arts in Damascus and was working as an art teacher at a school in Deir al-Zour when the town was occupied by IS in Syria’s civil war. The Art Newspaper reports that the artist smuggled around 30 works out of the IS-controlled area to a gallery in Damascus in order to raise money for his family, before eventually escaping in 2015.

Stories Art Gallery’s director is Manas Ghanem, who was previously a lawyer who worked across the Middle East and North Africa with the United Nations High Commission for Refugees and the UN children’s agency Unicef.

She said: “As a Syrian I am a refugee myself. I live in the UK, my family is back in Syria, but I have family all over. We decided to create an opportunity for artists who were unable to present their work in public and to also show that Syrians cannot be reduced to victims, refugees or migrants.”

Report argues current definitions of growth are not suitable for creative sector A survey by the Creative Industries Federation of more than 1,000 creative businesses, grant-funded organisations and freelancers has found that the measures usually used by the government and public bodies to assess growth – such as turnover or headcount – should be expanded upon.

The report argues that the creative industries, which are widely recognised as one of the most successful parts of the UK economy, should also take into consideration factors such as ‘increased profile’ and ‘social impact’.

It also recommends that the government should safeguard and strengthen public investment in the creative industries, and maintain existing tax reliefs. In addition, it calls for an equivalent to the Tech Nation network, which receives £5m annual funding from DCMS in order to support technology entrepreneurs through activities such as guidance, workshops and signposting.

Local communities to work with artists to create new residencies throughout Glasgow People across Glasgow are to have the opportunity to play a key role in creating a new series of artist residencies that will take place in their community.

Artists and arts organisations will work with local communities in all 23 council wards in the city from March to May 2019 to identify the specific needs and aspirations of each community. Applications are now open for this first phase of the programme.

This initial work will then be used to create individual artist residencies co-designed with each community. The residencies will take place in all wards in 2019 and 2020.

Councillor David McDonald, chair of Glasgow Life and deputy leader of Glasgow City Council, said: “Our new artist in residence programme represents a huge investment of faith and money into the transformational impact of art and culture and we believe it will make a positive impact in every community in the city.”

Image:
Protestors at the Whitney Museum of American Art on Sunday, 9 December 2018. Photo: NYC-DSA, the New York Chapter of the Democratic Socialists of America