Public art: debate questions who and what it is for - a-n The Artists Information Company 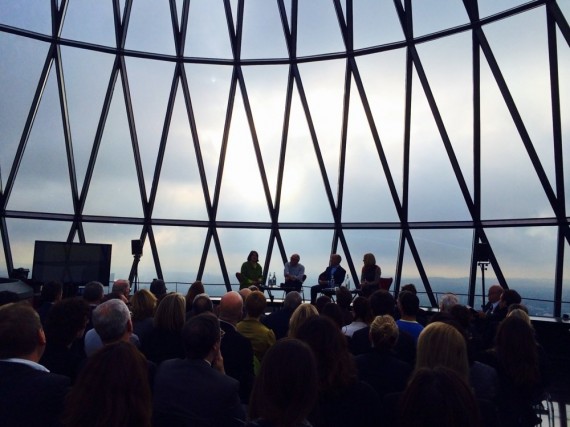 The question of who should fund public art was raised at a Frieze VIP event in central London yesterday (15 October). Taking place at the Gherkin building, the debate examined the role that businesses and private individuals can or should play in deciding what public art is commissioned for our streets.

The panel focused on examples of public art in the UK, including the current Sculpture in the City exhibition across London, plus examples from the Bloomberg Commission in New York.

Much of the discussion was about the importance of public art to society. Lilley said: “In the US, 55 million people a day experience public art, and it receives ten times more media attention than any other art form. Take Antony Gormley’s Angel of the North. It encourages communication and conversation and was part of a massive regeneration project in Gateshead. Richard Wilson’s piece for Liverpool Biennial [Turning the Place Over] also engendered great buy-in from local people. There are numerous examples of how public art has had a positive impact on communities.”

But what if the public response is negative? Wentworth commented: “I’d much rather be confronted with something and have an opinion. I want the world to feel like it has an opinion. The great thing about public art is that it feeds us culturally. In that sense, we are incredibly privileged.”

Who pays and does it matter?

Whether a sculpture is liked or loathed by locals is closely linked to one thing: who paid for the artwork in the first place. So, if it is financed from the public purse, should there be a responsibility on the artist to please as many people as possible?

Unsurprisingly, the panel had different opinions on this. Lilley suggested she had experienced numerous examples of concept designs receiving only a lukewarm response, only for the final piece of work to be praised, and vice versa.

She said: “You don’t necessarily have to consult the public. Who are the public? They aren’t simply a single entity. Consultation is difficult because lots of people might not go for the idea. They sometimes feel hostile and ambivalent as though someone is trying to get one over on them. We have a responsibility to manage this.”

Hiscox suggested that if a private benefactor is supporting a project, the artist is responsible to a far more limited group of people. “Once you obtain planning permission you can go for it. You still have to jump through certain hoops but in a very different way to when the money has come from the public purse.”

In a world where public funds are contracting rapidly and the current government are placing greater emphasis on philanthropic and private funding of the arts, is there a risk of our streets being littered with horrific artworks designed to suit the tastes of a rich elite?

One audience member suggested it should be the role of civic-minded organisations to strategically commission and place artwork in public spaces. Lilley responded: “It is difficult to imagine local authorities or the Arts Council taking this on board. That post-war period where there was a boom in public art commissions was unique and probably won’t be repeated.”

Hiscox added: “It is unrealistic to think the Arts Council will start ploughing money into this area. I just don’t think it will happen. Similarly we cannot solely rely on private giving. The situation in the UK is simply not the same as America.”

Crompton wrapped up proceedings by asking the panel whether the artist Ryan Gander’s assertion that public art has to be ‘significant’ is true. Lilley responded by saying it has to be ‘good’, with Hiscox saying it has to ‘make you feel’. Wentworth concluded: “Humans try to find meaning in everything around us. It is what we do.”