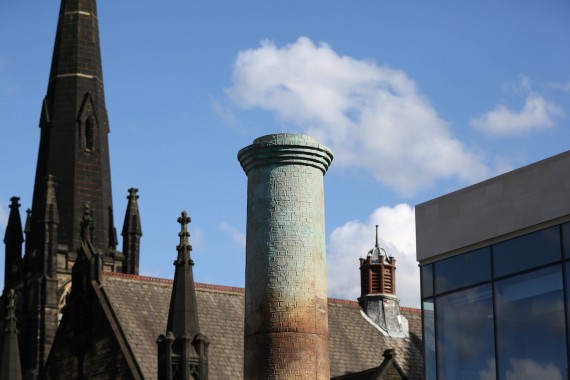 Curating the Campus – a symposium held to mark the launch of the University of Leeds’ Public Art Strategy – invited speakers from universities across the UK to discuss their experience of and work with public art on campus. But what kind of public or audience is imagined by campus public art, given that universities are still places where the majority of people do not venture?

What emerged during the day is how tightly the question of audience is embedded with other issues such as placemaking, widening participation, research and artistic autonomy. The approach to audiences contained within public art strategies shines a light on the current state of higher education where universities sit somewhere between being public, educational institutions and businesses focused on income generation.

In the past, universities were places that preferred to keep the general public out; now they actively invite people in. Eric Cross, dean of cultural affairs at Newcastle University, explained how the Newcastle campus is being redesigned to become a welcoming and pedestrian-friendly environment.

This architectural renewal can provide both the practical and financial resources to bring public art on campus. In Leeds, the newly commissioned artwork, A spire, by Simon Fujiwara – launched at the symposium – was realised as part of a new library development, resulting from a local authority stipulation that 1% of the scheme’s cost should be spent on art.

Permanent public works – where art is installed as part of the built environment – are a common feature in UK universities, explained Sian Vaughan, senior research fellow at Birmingham City University. Using examples from Durham, Oxford Brookes and UWE, she drew a distinction between ‘placemaking’ and ‘placemarketing.’ The former uses art to engage students and communities, welcoming them to the campus with artworks that help with orientation and encourage emotional or intellectual investment in the university.

The latter pitches art as a vehicle for economic generation: a flaunting of cultural capital aimed primarily at a remote audience. Emphasis is on ‘stakeholders’, including businesses and sponsors, rather than students and staff. Vaughn suggested that universities should learn from existing critiques of public art beyond the campus, where there have been long-held debates around instrumentalisation and the virtues of permanent public sculpture versus participatory or process-based work.

An example of a process-based approach came from Nick Slater of Loughborough University whose Radar programme pairs artists with university researchers to co-develop largely temporary, or event-based projects. The current Market Town strand is an action research project about the role of high streets, working with external partners in Loughborough.

Radar aims to integrate the university with the wider town community while acting as a vehicle for artistic research and student development. The primary audience is staff, students and the local community, although contributing to reputation building outside the university is increasingly important to access different funding streams. Slater spoke, for example, of the potential to tie artist commissions to the ‘impact’ strand of academic research funding.

The University of Leeds’ strategy involves a mixture of permanent sculptures and a proposed, annually themed programme of temporary interventions and events. Fujiwara’s A Spire plus another commission, A Sign For Art by Keith Wilson, launch the programme but, excepting these works, the plan is based largely on achieving more value from the university’s existing collection that includes work by Quentin Bell and Michael Lyons.

The approach has a unique Leeds flavour, enmeshing a vision for a piazza-like public realm with the history of artistic research and collecting that exists within the University. Work done so far includes re-siting existing works, providing interpretation panels and creating a campus public art trail.

In developing the strategy, the University undertook specific research into current campus audiences (predictably 45% were in the 18-25 age range and 28% were 25-35) and student interns conducted interviews to gauge knowledge and opinions of the existing collection. Plans to further involve staff and students include workshops, events, placements and cross-department research.

However, methods for engaging staff and students were not without contention. Conversations with Wilson and Fujiwara raised discomfort for text panels and over-interpretation of public art, and particularly with the process of asking students: “Do you like it?” Universities, it was suggested, were places where debate, discussion and dissent should be fostered – campus public art should not be ameliorative or agreeable to everyone but should question or trouble its audience.

The challenge, then, is multi-pronged. Universities such as Leeds have an ambition to work with artists and collections to develop audiences in line with their educational and research remit, and concurrently to improve the campus environment. Yet there is no big pot of money waiting to be spent on public art; programmes must respond strategically to current higher education agendas and potential funding streams.

The risk in such a climate is that artistic value and research expertise are neglected – and that art becomes a tool to create a populist or easy to understand identity for a university audience of paying clients.