Questions asked but answers avoided at 'What Should White Culture Do?' symposium - a-n The Artists Information Company 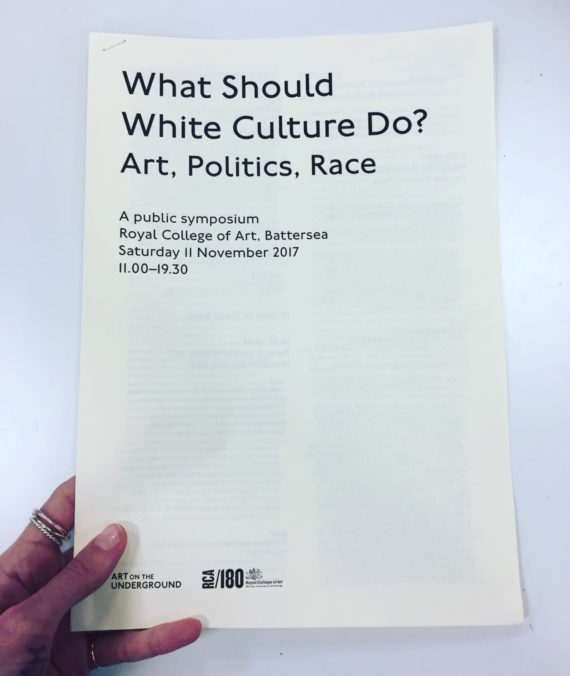 The question of who was being solicited for a response when asked, ‘What should white culture do?’ and what was expected of them, remained an unanswered one during the occasionally galvanising and ultimately infuriating symposium recently held at the Royal College of Art.

Halfway through the day-long event, during the ‘Contemporary Art, Migration Studies, Race’ panel, the audience was presented with a typically arrogant perpetuation of the kind of hegemonic mindset that this symposium was supposedly convened to address.

This left me with a dilemma. The acknowledgement of this transgression was, most certainly, going to drain my energy and expose me to the expectation of extractive, performative labour, so often demanded of BAME people in predominately white spaces. Even (especially?) those spaces that are supposedly engaged with the act of performing openness, radicality and pluralism.

Yet, when confronted yet again with Black Death Spectacle, what is one to do?

White South African artist Oliver Chanarin presented work made as part of the artist duo Broomberg & Chanarin that almost exclusively used black bodies as material – without agency – including a film where a mechanical digger sings a Sicilian aria while floating around the Mediterranean, encountering the abject spectre of displaced Africans. It then proceeds to crush aestheticized and beautified proxies of the boats supposedly used to transport said people to Europe (the actual boats being far less glamorous).

This work was showed alongside photographs and films of Africans in various states of (un)dress and poverty, and a video of an elderly Jewish South African woman describing her horror at encountering black people. The latter was positioned as being in opposition to the artist’s own enlightenment.

In an otherwise polished and dynamic presentation that effectively weaponised data to unveil a counter narrative of the so-called migrant crisis in the Mediterranean, Italian academic Dr Nando Sigona spoke extensively about Alan Kurdi, the Kurdish-Syrian toddler whose death symbolised the plight of his people in 2015.

Sigona utilised the term ‘we’ (that great, unthinking, arrogant, exclusory ‘we’) to declare that ‘we’ never see images of the dead black children (the vast majority of children dying during this migration), positing that Kurdi had been coded as white and thus valuable: ‘we’ are able to care about him, because of his proximity to whiteness. 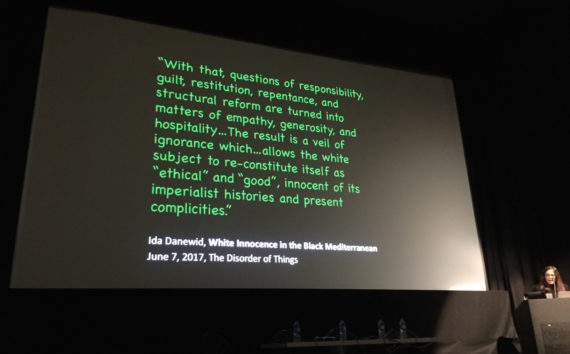 In the same presentation, Sigona displayed an image of a dark skinned girl with tight curly black hair, floating face down in the sea, her clothes a meringue of pink layers. The images remained on screen even when he had moved on with his talk. She was not named or contextualised.

I asked a question: What was their relationship to the term ‘Black Death Spectacle’? How does Chanarin describe his use of black bodies as material? Could Sigona expand on the dichotomy he had set up with these contrasting images, and his decision to display the dead girl’s image for so long, without warning or context? What counter-hegemonic potentialities are made possible by using theses contrasting images in such a way?

In response, Sigora maintained that ‘we’ (meaning I) should not be afraid of confronting images of death and the racism that they represent. “We never see these bodies,” he said. He does not have to provide a warning – ‘we’ need to see this.

It never occurs to the academic that a black person may in fact be quite accustomed to seeing scenes of black death. That – in fact – black death is often more prevalent than black life in the media, and to suggest that the question betrays a ‘fear’ of seeing the effects of racism is ludicrously offensive.

Chanarin tethered his position to that of Sigora (even though they are not, in fact, so conveniently intertwined), accusing me of not having a sufficiently “intellectual approach” to racism. Empathy is meaningless, he said. Neither took a moment to even consider the questions, immediately going straight to denial, distraction and diminution. When this occurs, what is taking place?

I responded by stating that empathy – of lack thereof – is behind all significant political and societal movements. That the current occupant of the White House is there because he displayed empathy for people afraid of demographic and social change; the major political decisions currently under discussion (Brexit anyone?) are in response to at the very least the performance of empathetic reasoning.

At this stage, there was an interjection from the keynote speaker – the brilliant African American academic Professor George Yancy. After confirming that I did, indeed, identify as black, he took both speakers to task, asking how on earth they could tell this black woman that she needed to be more ‘intellectual’ about the racism she encounters in everyday life.

Yancy made the critical point that white male authority always rushes to claim the intellectual high ground as a way of gaslighting ‘others’, in particular women, and especially black women. He also expressed his outrage at the disproportionality in the treatment of the two dear, dead children.

The question being asked in the USA right now is, Yancy argued, are white people even capable of empathy?

This is the same question articulated by Claudia Rankine recently, and the failure of empathetic connection and analysis on display was in many ways a forseeable disappointment. It was the inability to actually see the black bodies being used, manipulated and monetized that marked this exchange as being so predictably egregious. 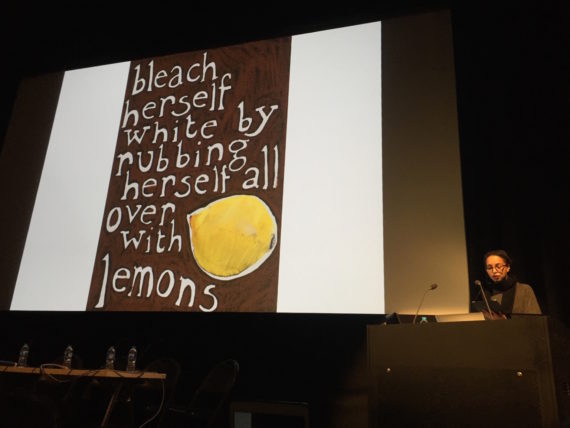 This is not the article I anticipated writing. It would be wonderful to be able to discuss the various presentations in depth – especially Jade Montserrat’s charming, rigorous and poetic unveiling of her research and practice; Dr Richard Seymour’s forensic, passionate deconstruction of the white unconscious; and Anthony Faramelli’s beautiful interpolation of the personal and the political in the construction of the ‘Good Indian’.

Yancy’s keynote too, which was staggering in its brilliance – scholarly, performative, exacting and demanding – confronting the histories and realities of the structural inequalities, outrages and injustices that are encoded within us, whether we can recognise it or not.

Yancy was the only person to ask what the afterlife of the conference should be, its ethics and responsibilities. The response received was that there was no aim, that it is ‘good to talk’. This kind of lazy, complacent, ivory tower approach is of course most applicable for those who are not directly affected in their everyday life by the ideas under discussion.

This feeling was further heightened by the interventions of various students of colour in the room, whose stories of institutional dismissal and neglect echoed that of my own peers 20 years ago, and those before me.

One is struck by the difference in quality between the scholarship in this area in the USA and UK; this prevalent commitment to the idea that nothing really needs to change, or at least not in any way that requires actual effort. The suggestion, it seems, is that difficult questions do not need to be considered, cogitated, analysed, and enacted.

The experience of being ‘one of the few’, of all eyes turning on you when you dare to raise your voice, is not new to me. I remain unimpressed by all the smiles and whispers of “thanks” that arrived retrospectively from ‘well meaning’ people. If you agree, speak up! If you have the same thoughts, share them!

Yet again, the burden of labour is placed on the bodies of the few melanated subjects in the room forced with a choice between doing the ‘diversity work’ that Sarah Ahmed has identified, or swallowing profound and disheartening rage.

What should white culture do? Much, much more than this.

Sonya Dyer presents The Claudia Jones Space Station from 16 to 19 November 2017, at Baltic and the NewBridge Project, Gateshead