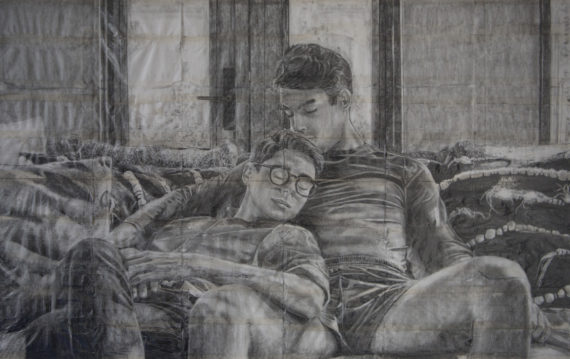 The Royal Academy of Art Summer Exhibition 2021 has just opened in London, rescheduled from its usual launch in June. The show includes over 1,000 works selected by coordinator Yinka Shonibare RA and a panel of artists, under the theme of ‘Reclaiming Magic’. In this first part of our ‘in view’ focus, we look at the work of 9 a-n members, and an a-n member-led group, included in the show.

James Robert Morrison’s pencil on cigarette papers drawing is titled There is never more than a fag paper between them – Jack and Edward (top image).

Explaining the work, the artist says that while on a bus on his way to work a year ago he “overheard a teenager discussing a gay couple in his class at school, saying that ‘there is never more than a fag paper between them’.

“At that age, I didn’t know anyone gay, there were no out and proud public figures or couples and school was an exclusively heteronormative environment due to section 28. What I did have though, was a collection of gay pornography, and I guess the couples in these magazines were who I had to look up to.

“In the UK, ‘fag’ is first and foremost a colloquial term for a cigarette, before being a homophobic slur. I used this play on words, drawing couples from my collection on an original and challenging medium – cigarette papers.”

Eleanor Havsteen-Franklin’s print Incrementum is an etching with thread on Japanese paper, inspired by her collaboration with the scientist Dr Schornack and his research on fungi and mycorrhizal processes at Sainsbury Laboratory, Cambridge University. Her work focuses on visually embodying the interwoven relationship between botanical and biological forms, in order to reflect on the fragility and resilience of ecosystems and human life. Exploration of surface is an important aspect of her detailed hand drawn studies of flora, fauna and organic forms. By allowing foul biting on the copper plate during the etching process, a dialogue is created between random surface impressions and the drawn line. The surface begins to allude to the molecular and the tactile nature of the print, and is evocative of the changing textures of ‘living’ surfaces such as human and plant physiology, which is explored further with stitching into the print.

Claire Willberg’s practice combines traditional intaglio and relief printmaking techniques. Her recent series of etchings Pink Shelf takes inspiration from observing and recording the small-scale discarded plastic objects that she finds on our city streets. By bringing a collection of these found objects together she allows them to regenerate and create new identities that are loosely recognisable by their shape and interaction with colour rather than a connection to any previous existence they might have had.

The objects in her prints combine and merge with both the grids and shelf like structures to contain, overlap and build spaces that have a familiar but distant link to the real world often reminiscent of an archive in a museum or storage space.

Net Curtain is a result of ‘Doorstep’, a lockdown project created by artist Cash Aspeek for Redstart Arts, a group of artists with learning disabilities. Working with the collection of The Horniman Museum and Gardens in south London, the Redstarts and families received weekly art packs looking at animals that have their own ‘PPE’ –  those with their own methods of protecting themselves.

The images produced were transferred to cloth and embroidered with a group of volunteers, to create a Net Curtain, another way humans protect themselves from their external world.

“When we can’t physically be together, there are still ways to connect. From doorstep chats to collaborative art works,” explains the Redstarts.

Cash Aspeek’s own work Resistant, also included in the 2021 Summer Exhibition, combines performance, forensic examination and image making as an exploration of her 22-year-old mattress. Moving through its layers and uses, Aspeek treats the object itself as an archive of formal processes and parts, subject to analysis and experimentation. She excavates and reconstitutes the fragments into new forms, images and objects for performance, creating magically unknown works out of the hidden and mundane. Resistant shows the artist wearing pyjamas made from the outer layer of one side against a back drop of the other. The headpiece is the mattress quilted side panel together with air vents and fire label.

Redstarts artist David Quan is also exhibiting in this year’s exhibition. Quan is a Vietnamese heritage artist who is nonverbal with autism and learning disabilities. He has been working with Aspeek for 13 years and they have been making art together during that time. Working with Quan and several other learning disabled artists led Aspeek to set up Redstart Arts, in Deptford, London, in 2011.

Rudy Loewe’s work in the Summer Exhibition is a painting of Anansi, traditionally known in Caribbean folklore as a trickster.

Loewe explains: “This painting, which is the first in a series, reimagines them as a genderqueer shapeshifter. A hustler who cannot fit within the systems our lives are restricted by, Anansi is a symbol for those who have been pushed to the margins, or made to feel small or dismissed.”

Michael Lisle-Taylor presents Cihuateteo, a sculpture cast from the body of a woman in her eighth month of a twin pregnancy, a term preceded by eight miscarriages. The cast is sheathed in kevlar and dressed in United Nations (UN) blue. The work is one in a series of convincing pieces of Bomb Disposal Equipment for heavily pregnant woman, and takes its title from a small sculpture the artist saw at the Royal Academy’s 2003 ‘Aztecs’ exhibition. The Cihuateteo ‘Divine Women’ were said by the Aztecs to be the spirits of human women who died in childbirth, and were considered equivalent to warriors dying in battle.

Lisle-Taylor comments: “I served with the UN during the break up of the former Yugoslavia; this campaign has earned justified ‘moral injury’ regarding the violence against women and sex-trafficking that took place under its watch.”

US-born, London-based artist Gisela Torres exhibits a photopolymer print Conjure No.4. The work is part of an installation Looking for Edmonia (Self-Portrait), which consists of a series of photo polymer prints, marble prints, expired type 55 polaroids, a 3D print projection video and assemblages made of marble fragments.

As Torres explains: “The work proposes an uncanny dialogue with the 19th century mixed race American sculptress Mary Edmonia Lewis, who was the first woman of African and Native American heritage to achieve international fame and recognition in the fine arts world”.

Torres’s commonalities with Lewis – both mixed race American women with creative ambition and Italian domiciles – and Lewis’s unmarked grave found in a London cemetery close to where Torres once lived, “propelled a sort of psychic connection and a desire to ‘channel’ her,” says Torres.

Simon Roberts’ selected work is from a series of cyanotype prints made in response to European Space Agency satellite images released during the pandemic, which showed a dramatic drop in nitrogen dioxide emissions.

As Roberts explains: “The skies were momentarily clearer, bluer, the earth was breathing again. This series of unique cyanotypes use negatives of pictures I took from plane windows while travelling during the years before the pandemic. The Prussian blue of the cyanotype is a colour not found in nature, but is brought about by a chemical reaction that produces ferric ferrocyanide, and evokes an otherworldly, dreamlike intensity that is augmented by layering multiple negatives.”

The Royal Academy of Art Summer Exhibition 2021 continues at Burlington House, London until 2 January 2022. View the full catalogue of works online at www.royalacademy.org.uk/exhibition/summer-exhibition-2021

Top image: James Robert Morrison, There is never more than a fag paper between them – Jack and Edward, 2021, pencil on cigarette) paper.