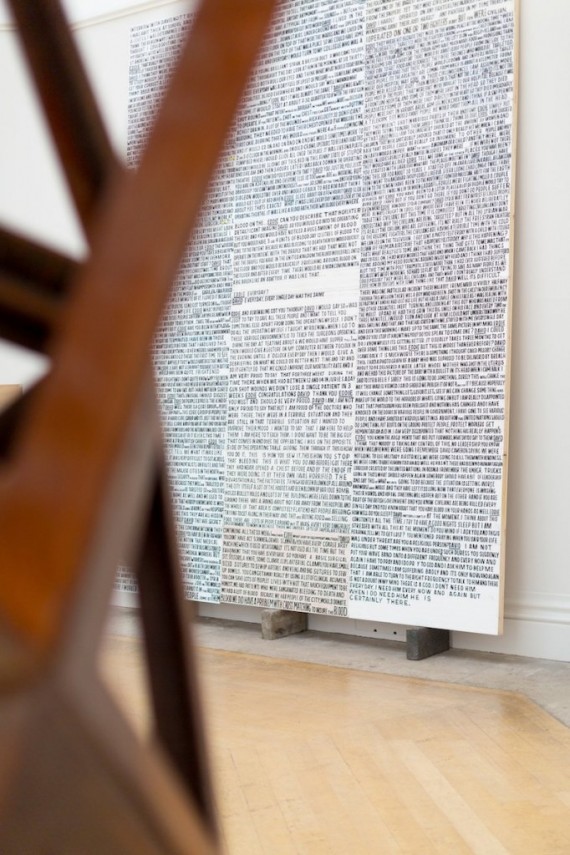 A painting by the artist Bob and Roberta Smith at this year’s Royal Academy Summer Exhibition features the full transcript of a graphic and harrowing interview with a doctor, recorded shortly after returning to the UK from Syria.

Doctor David Nott was interviewed earlier this year by PM presenter Eddie Mair and talked candidly about his bloody and traumatic time as a surgeon in a secret hospital in Syria. Smith has taken the full interview and transcribed it in black paint on a large, white canvas that measures nearly 5m high by 4m wide.

Speaking on BBC Radio 4’s PM, Smith explained that he’d worked on the painting for many months: “It took me – not working on it everyday – since the day I heard it [the interview] to the day I had to submit it to the Royal Academy, so it’s taken 4-5 months to paint.”

Excerpts from the full transcript include: “Everyday was a day full of upset, depression, of a significant amount of casualties, of blood everywhere… It was always the same…

“It was like a bloodbath… You’d quickly operate on a patient… and you’d basically be squelching around with blood on the floor. And after every time there’d be a man come in with a big brush, like in an abattoir, it was like that.”

Smith’s painting is one of over 1200 works featured in this year’s show, which has taken place annually without interruption since 1769. The work is being shown in a special room dedicated to newly-elected Academicians, which includes work by Conrad Shawcross, Yinka Shonibare, Chantal Joffe and Wolfgang Tillmans.

The exhibition also features a section curated by Cornelia Parker and focusing on the theme of black and white. Among the artists exhibiting are Michael Craig-Martin, Tacita Dean, Michael Landy, David Shrigley, Jeremy Deller, Christian Marclay and Laure Prouvost.