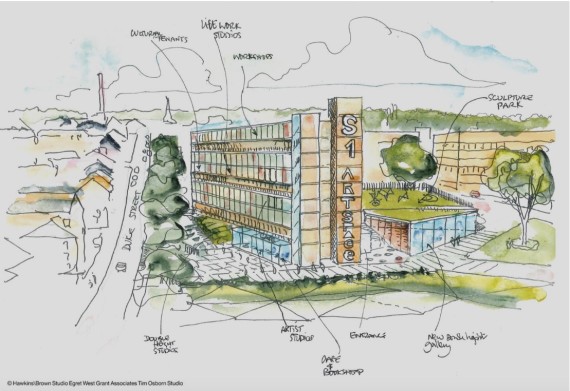 S1 Artspace, the artist-led gallery and studio space in Sheffield, has shared more details about the £1million of government funding announced in last week’s budget for a new arts complex in the city.

The funding, which is dependent on planning permission being granted, is for a new development on Sheffield’s Park Hill estate.

S1 Artspace intends to turn the Duke Street wing of this brutalist housing estate – built in 1961 by architects Jack Lynn and Ivor Smith and in part recently refurbished by property developers Urban Splash – into its new, greatly expanded, home.

With a projected opening date of 2020, the currently derelict wing of the estate which overlooks Sheffield city centre will provide 6200m² of space. The planned scheme will consist of artist studios, creative workspace, live/work flats, production workshops and an education space.

It will also include an archive, auditorium and a gallery, which S1 Artspace say will be ‘one of the largest galleries dedicated to contemporary arts in the North of England’. Outside, there are plans for a sculpture park.

The organisation already has a presence in Park Hill through its contemporary art programme in the former Scottish Queen pub.

Louise Hutchinson, S1 Artspace artistic director, said: “It has been a huge team effort to get to this point and I would like to extend our sincere thanks to everybody who has helped so far.

“This is the first major step towards realising our ambition and we very much look forward to the journey ahead.”

Lord Bob Kerslake, a champion of the project, said: “This is an exciting project for Sheffield that will provide a fantastic new home for arts and culture at Park Hill. I am delighted to be championing it.”

S1 Artspace was founded 20 years ago by artists in the city and is currently based on Trafalgar Street.