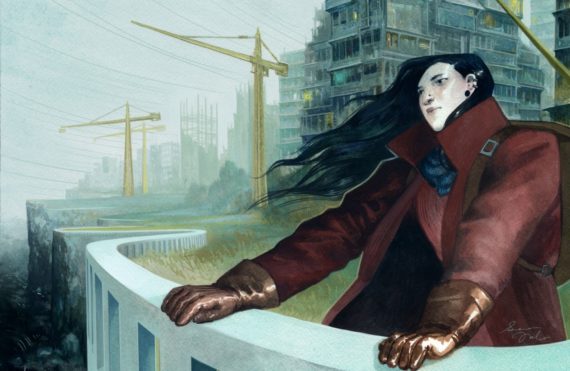 In the third in a series of conversations with the Shape Arts’ Transforming Leadership Programme cohort 2020-2022, Shape CEO David Hevey talks to Liam Hevey, who has been publishing under the name Dice Kapital for a year. He has already released three works: ECOPUNK: 2044, Gambler’s Heart, and Frankenmonster Creaturestein.

ECOPUNK, his flagship project, is a fully illustrated 260-page hardback book. By choosing to print it at a zero-waste factory that plants three trees per book and uses 100% biodegradable packaging, Liam Hevey is attempting to set an environmentalist and anti-consumerist example for the field of tabletop games.

Hevey is currently working on a series of smaller games and hopes to publish seven throughout 2022. His next major work, The Mystics, will tell the story of communist sorcerers fighting Operation Gladio in post-Second World War Italy. It is slated for release in 2023. He is also Shape Arts’ gaming producer and through this role is piloting the Dice Kapital TTRPG Grant Scheme to enable other creatives working in this area.

David Hevey: What is your creative practice and what are you trying to make happen?

Liam Hevey: I am a maker of what’s called ‘tabletop roleplay games’ (TTRPG), a growing medium combining improvised acting and a rules structure that allows a group of people to collectively improvise a story.

With Arts Council England and Shape Arts’ support, as well as a successful crowd funding campaign, you completed ECOPUNK: 2044. Tell us about that.

It’s a science fiction TTRPG set in the year 2044. It’s an attempt to make a TTRPG that grapples with a serious idea: climate change and its consequences – the wars it will start, the diseases and famine it will cause – how it will change everything.

It’s a book. You crack it open and it gives you the rules to make a character within the future that the game envisions. You then get the rules to play out a story with your character and other people’s characters, and one person takes the role of a ‘game master’ who provides the frame of the narrative. The hope is that people will engage with it and maybe give more thought to this horrendous future that’s coming and hopefully help to do something about it.

And you talk about Leninism, class struggle and other classic politics?

Yes, there’s a serious absence of class politics or even just left-wing analysis within tabletop roleplaying games. I’m kind of hoping that I can publish games that very overtly talk about Marxism and materialist politics.

What are the aesthetics?

I am trying to push a new aesthetic with Ecopunk: a kind sci-fi noir. The game is about a dark, post-war scarcity, with intrigue, violence, those kinds of things. The art style is more expressionist, the idea being that if you can see the brush strokes, it implies that this is imagined, this is a theoretical future: things become more ambiguous and there is potential for difference.

The other dimension to the artwork is that the front cover is very neat, with a kind of Baroque style with a Greco-Roman architectural reference. Then you open the book up and the backing image is also a kind of Rococo. We start with Baroque fonts that get messier as we get into the subtitles, that look like stencilled graffiti, and the interior artwork is framed as being painted on to the page. The idea is that of a progression from a neat overarching look to grungy, graffiti aesthetics.

The hope is that people will digest the layout in a similar way to the setting. There are these megastructures, giant buildings and sculptures, and so on. There’s the neatness of the overarching politics. But then as we descend into the streets and the alleyways, there’s graffiti, there’s mess, there’s struggle. That’s the other dimension to the aesthetic.

Where does the environmental politics come from?

Oh, you know, massive existential angst about the climate crisis and how it feels hard to do anything effective politically; I can’t change the political world, so I make tabletop role playing games! It’s me trying to do something that helps me sleep at night, really.

What does success mean to you? Things like the BBC profile? Is success big audiences?

I’ve got success currently because I can make a living doing this stuff. I don’t really care a huge amount about growing a big audience. I mean, if I can get to a point where I have enough of an audience that I can sell my games and that provides enough money to make a living, that would be great. But I’m currently managing to survive without doing that, so that’s pretty good.

Do you see yourself as a leader?

No, I’m no leader. There are no real leaders in the TTRPG space because it is primarily dominated by a kind of liberal cultural ideology which means it’s purely reactive to the market. No one ever says, ‘We should do this collectively.’ Hopefully I’ll change that.