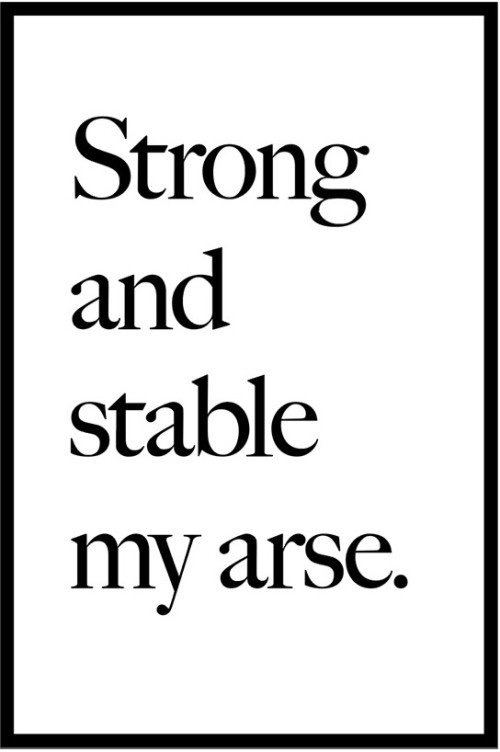 Jeremy Deller’s ‘Strong and stable my arse’ posters are proving to be a big hit, with a second edition of the Theresa May-taunting notices released on the Flying Leaps website due to demand.

It follows the revelation on Monday that the Turner Prize-winning artist was behind the striking black and white posters which first appeared across London over the weekend.

On Monday, Deller confirmed to the Guardian that the designs were his. The posters were put up by the Flying Leaps project which aims to show artists’ work ‘on street poster sites to make unexpected, thought-provoking contributions to the urban spectacle’.

Some fantastic public twitter posts today of @jeremydeller‘s “Strong And Stable My Arse’ Thanks all Keep them coming. #strongandstablemyarse pic.twitter.com/4kEJL7PR7M

Deller is no stranger to creating provocative works in public settings, from 2001’s recreation of The Battle of Orgreave to 2012’s life-size, ‘bouncy castle’ version of Stonehenge, Sacrilege, co-commissioned by Glasgow International and the Mayor of London.

In 2013, his British Pavilion presentation for the 55th Venice Biennale reflected his ‘love-hate relationship’ with the UK. ‘English Magic‘, struck an anti-establishment note, celebrating the country’s socialist and folk history while criticising the invasion of Iraq and its legacy, tax-avoiding millionaires, and the bling lifestyles of art-buying, globe-trotting billionaires.

It was recently announced that Deller has designed a series of posters celebrating Beatles’ manager Brian Epstein, which will go up around Liverpool in the lead up to celebrations marking 50 years since the release of Sgt Pepper’s Lonely Hearts Club Band.