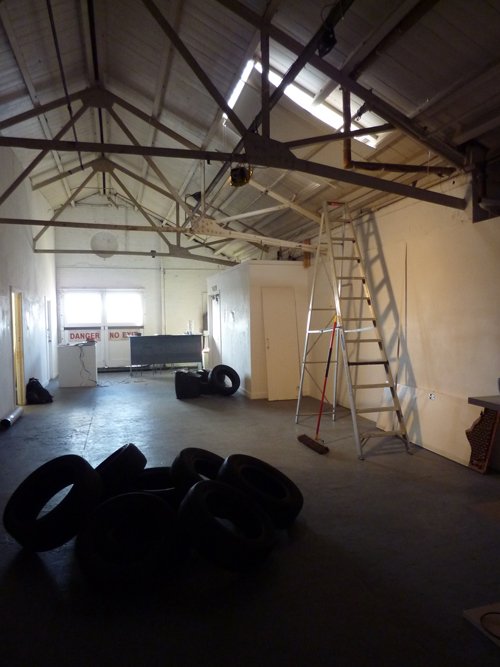 “It’s like being back at art school, it’s great!” Five storeys up, in a loft space above artist-led Mother Studios, artist Riccardo Iacono is preparing for his exhibition opening. For the past two weeks, Iacono has been in residence at Summit Gallery in Hackney Wick, making work in response to the space, and to the industrial, post-Olympic area around. “I don’t usually work with galleries,” he says, “but it helped that it’s run by artists. There’s a vocabulary and language you only become familiar with through an awareness of processes of making.”

Iacono is interested in sensations of vertigo, in the perspectival shifts of the bird’s eye view, and in digital manipulations of the everyday. Colour photographs tacked precariously to the gallery walls show traffic cones or upturned rubbish crates distorted by fluid, digital brushstrokes. TV monitors, balanced on piles of discarded tyres, play dizzying video clips that track the sweeping gestures of the artist throwing objects – garden peas, wet cloths – in various public and private spaces.

Iacono’s improvisational, process-led work fits well with Summit’s ethos – to support experimentation, research and collaboration, and to offer artists opportunities to exhibit works that might be difficult to show elsewhere.

“It’s a non-commercial space and completely un-funded,” says gallery Director Natalie Sanders, herself an artist and studio holder at Mother. “But our offer is space – it’s a wonderful space, and a good size for artists to realise new work.”

Summit takes up the baton from previous Mother Studios project Elevator Gallery, which ran from 2007-2012 and supported transgressive and experimental practice. It preserves Elevator’s open submission policy, but this time with a team of invited selectors, rather than gallery staff, choosing the programme.

Sanders wanted to offer an alternative to the ‘who you know’ standard, to avoid making decisions based on personal preference, and to signal that artists don’t necessarily have to be fierce networkers to get a show. “I didn’t want it to be purely people we know,” she explains. “You can get good artists that way, but it can be limiting.”

Summit received over 200 submissions from their first call out – an indication, perhaps, not only of the number of artists in need of exhibition space, but also of how appealing Summit’s carte blanche approach is.

“We want to keep things as loose and open as possible,” says Sanders. “It’s frustrating to be constantly trying to think of ways to fit your work to a theme, when really you just have a new piece you’d like to show. And it’s important not to compromise the practice – we can offer support and an additional critical component but really it’s all about each artist’s work and development.”

Like Iacono, Sanders recognises the importance of her artist’s perspective, and is determined not to let her commitments as gallery director overshadow her studio practice. “Often when artists start running a space it can take over completely – but I’m aware of the importance of managing my time, to stick to my two-and-a-half days a week! It’s so beneficial, for you and the artists you are showing, if you can sustain your own practice as well.”

Against the backdrop of the edgy and ever-transitory Hackney Wick, Sanders’ calm demeanour and steadfast commitment is encouraging. The past few years has been a time of particular upheaval for the area’s artist community and several projects – including Wallis Gallery, The Residence and Decima – have had to move on.

“It was hard to know what would happen during and after the Olympics,” Sanders says, “but now it’s time to get back to normal. We’re happy to have this space to work in and hopefully we can just carry on.”

Iacono will be in conversation with Steven Ball, artist and Research Fellow at the British Artists’ Film and Video Study Collection on 17 February, 3-5pm. Follow the project blog at thisorientation.blogspot.co.uk