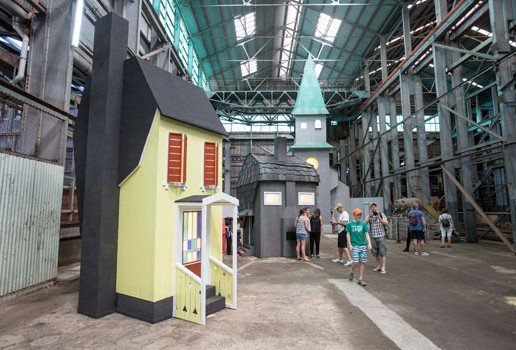 Cockatoo Island, a 20-minute boat ride from the centre of Sydney, was a 19th century convict prison. Later it held a girls’ reformatory school, and in the 20th century a naval dockyard. Arriving at what is now a world heritage site for the launch of the 19th Sydney Biennale last week, one didn’t need to reach hard for the metaphors of imprisonment versus freedom in a city that has its roots in a penal settlement.

That history gives Sydney a lasting frisson. It still has, as the curator of this edition of the Biennale Juliana Engberg puts it, a “frontier” or “feral” charm. But the resonance at the opening of an impressive Biennale last weekend was extra acute, for it was hard not to see the art through the prism of the dispute that preceded it.

A row about the Australian government policy of the mandatory offshore detention of those asylum seekers who arrive in the country by boat spilled over into the arts event. Just weeks before the opening, construction and infrastructure giant Transfield Services announced it was entering into a contract for services to the detention centres on Manus island and Nauru.

Transfield has financial links with the Biennale’s key sponsor the Transfield Foundation and the Biennale’s then chair Luca Belgiorno-Nettis, whose father founded the arts festival. The controversial offshore detention policy has been condemned by human rights groups and a UNHCR inspection of the Manus Island facility in November 2013, which operates under an agreement with the government of Papua New Guinea, concluded that it was in contravention of international law.

While outside activists called for a boycott of the event, some of the participating artists signed an open letter calling for the Biennale to sever its links with Transfield. Nine withdrew their works. On the brink of the opening, Belgiorno-Nettis tendered his resignation, the Biennale cut its ties with the company and all but two of the planned artists exhibited.

In other circumstances, the loose premise for the exhibition under the title, You Imagine What You Desire, might have appeared naïvely open and somewhat romantic. Engberg, who is the director of the Australian Centre for Contemporary Art in Melbourne, talked repeatedly of artists as sensitive souls who were a bellwether for the rest of society. In the end, her open approach has been sorely tested yet found to be durable. For Engberg’s Biennale doesn’t pursue a single philosophical thread but a plurality of voices.

Unlike many agenda-driven events, it isn’t defined or confined by a defining curatorial worldview or a single politics. But don’t be mistaken: politics it contains, like the indigenous Bidjara artist Michael Cook’s digitally manipulated photographs, which insert his own multiple likenesses into the spaces and places of official (and traditionally white) Australia. Susan Norrie’s Dissent is a raucous film of angry Japanese protests against nuclear energy, which runs counter to Western perceptions of Japanese culture, but also to official figures that have diminished the extent of public anger in the wake of the Fukushima disaster.

Against earthbound work like these were works of transformation, lush fantasy and romance, including a vast liquid installation by Pipilotti Rist. Douglas Gordon’s Phantom set a film of a weeping kohl-rimmed eye against the plaintive tones of Rufus Wainwright. At Carriageworks, a vast former train shed which largely hosted video works, the debates about freedom and control came into focus. Henry Coombes’ video, I am the architect, explored the clichés and conflicts of art and architecture. Ane Hjort Guttu’s documentary Freedom Requires Free People followed 8 year-old Jens as he struggled with, and rebelled against, the constraints of his strictly conformist Norwegian education.

Implications for the arts

The long-term implications for the arts in Australia following the Biennale’s split with Transfield are not yet clear. Some patrons appear to have circled the wagons – Luca’s brother Guido used the occasion of the opening speeches at the Art Gallery of New South Wales to launch a scathing critique of “artists and activists” as though the two were synonymous, and set out a defence of Transfield’s position. Politicians have openly rattled sabres over the future of arts funding, suggesting that public money would be withdrawn from artists who unreasonably turned down sponsorship. Privately, figures in the art world suggested that this may be playing to party politics rather than marking a real shift in policy from the arms-length funding of the arts which currently prevails.

The openly pugilistic approaches in public speeches and hostile newspaper commentaries were notable in a globalised art world where similar conflicts occur every day but are often ignored, disguised or smoothed over. Juliana Engberg remained sanguine throughout, a steady, diplomatic and daily presence at the Biennale openings, speaking up for artists at every opportunity, roundly applauded on each occasion. In Australia, the debate may represent a kind of coming of age in an arts world that is close knit and dependent on philanthropy.

Events in Sydney put many artists under pressure, in an unenviable and unanticipated position not of their own devising. Yet in pressing for severing links with Transfield it also revealed their potential to at least partly shape their own circumstances. Whether this serves as even a tiny dent in the armour-plated front of an internationally controversial government policy which appears to have widespread public support in Australia may be another matter.

Engberg’s able curation in advance and personal steeliness on the day has steered a remarkable course, allowing the conversation about what kind of world we want to take place within and through the arts, rather than being silenced or ring-fenced outside of it. On Cockatoo Island the opening drinks were served from within the Copenhagen duo Randi and Katrine’s massive installation, The Village, a cute settlement out of a Scandinavian fairy tale with church spires and anthropomorphic buildings with smiling faces. It was only after a few moments that visitors realised we were within the perimeter of a sinister gated fortress. As Engberg predicted, often the artists get there first.

The 19th Biennale of Sydney continues until 9 June. www.biennaleofsydney.com.au

Artists withdraw from Sydney Biennale in dispute over sponsor