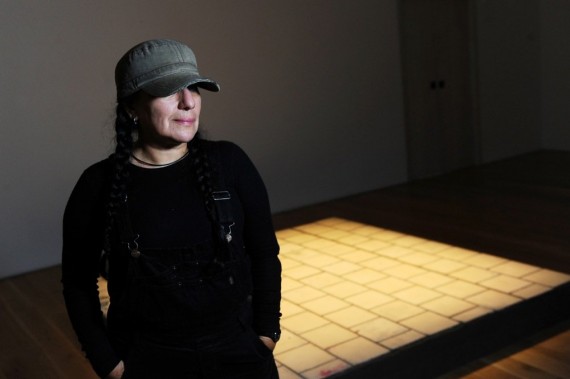 Mexican artist Teresa Margolles has won the fifth Artes Mundi Prize. She was announced as the winner at a ceremony at Cardiff and will receive a prize of £40,000.

Margolles won the prize for her body of work over the last five to eight years. She often deals with death and absence in her pieces, and her work at the National Museum, Cardiff, includes tiles from the building where her friend, fellow artist Miguel Suro, was murdered, and water used for cleaning bodies in a morgue which hisses as it hits hotplates. Like much of Margolles’ work, the piece references the ongoing drug war in Mexico and the many, often anonymous, deaths associated with it.

Chair of the judges, the curator and broadcaster Tim Marlow, praised Margolles for the “the visceral power and urgency” of her work. He also said the judges admired “the sophistication of her work in confronting an ongoing human tragedy”.

Margolles was presented the prize by First Minister of Wales Carwyn Jones. He said: “The competition continues to go from strength to strength, and is truly international in its reach. It is a great privilege to be able to host the event in Wales and it plays a major role in our nation’s vibrant cultural scene.”