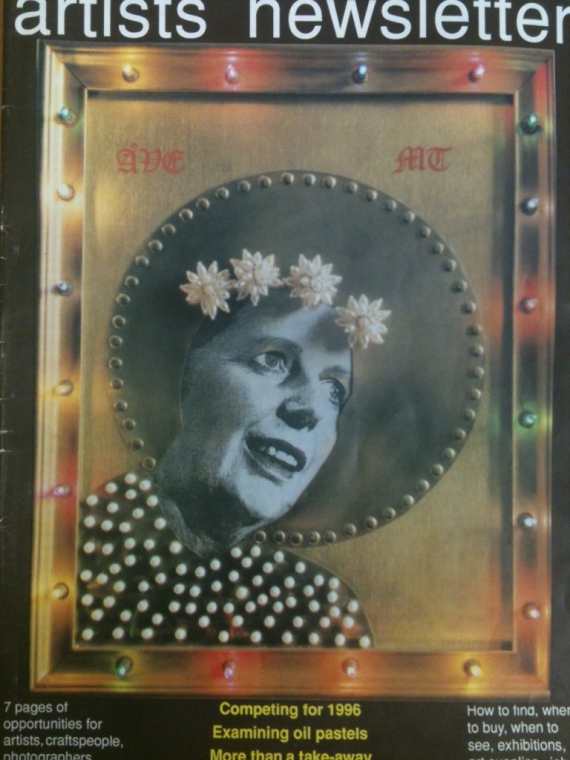 Launching in September 1980, a year-and-a-half into Margaret Thatcher’s first term as prime minister, a-n’s approach was in part a response to her iron leadership and unpalatable free market economy policies. Her agenda impacted on the mechanisms a-n created to give space for artists’ voices and insights, allowing artists themselves to make work and advocate for arts practice, its processes and people.

Thatcher and her policies exemplified the selfishness and thoughtlessness that many artists hated – her ‘no such thing as society’ mantra catalysing artists’ works and deeds. As Artists talking blogger Saskia Neary commented in 2010: ‘She successfully appealed to the lowest common denominator and relieved us of any social conscience.’

a-n was established in Sunderland, where mines and shipbuilding defined the landscape and the culture. On 19 June 1984 – when the miners’ strike was three months old – we awoke to see images in the national press of what was dubbed ‘the Battle of Orgreave’. They included John Harris’ documentary photograph of Lesley Boulton – known to a-n though our relationship with artists at Yorkshire Art Space in Sheffield. The now iconic image shows her at the mercy of a mounted policeman, bearing down on her with his baton at the ready.

Publicly, the Battle of Orgeave was a defining moment, not just for the strike but for contemporary British political history. The social and political blight engendered by Thatcherism had a huge impact on the forms and credibility of political resistance. Later in 2001, David Butler – then a co-director of a-n – took part in Jeremy Deller’s Artangel Commission, a re-enactment of the Battle of Orgreave, playing the part of a member of the Welsh constabulary.

A look through a-n’s archive reveals many references to Margaret Thatcher and the impact of her policies, both while she was prime minister and after she was forced to resign by her own cabinet in November 1990. A selection follows.

a-n archive, 1989
‘Ten per cent of people on the government’s Enterprise Allowance Scheme are artists and authors. Now nearly six years old, EAS could be informally put up as the arts patron of the decade, with Arts Council of Great Britain’s assistance palling into insignificance when set against the EAS sums available via the DHSS (Department of Health and Social Security).’

a-n archive, October 1990
‘The real danger of state patronage of the arts has been its multiplying layers of bureaucrats – developed to attend the ‘supporting’ of the arts and the complex systems that have grown larger as the constituency of the arts has shrunk. As Professor John Pick commented in The Arts in a State: “The unwritten principle of ‘arms length’ state funding has been replaced with a Thatcher-sharp notion of accountability in which the role of artists could be replaced by Smarties and no difference would be noticed.”’

a-n archive, January 1992
On the magazine’s cover: Margaret Thatcher from The Twelve Apostles (or the Last Laugh) series, Sean Taylor, showing at The Collective Gallery, Edinburgh.

a-n archive, October 2002
‘The trick with taking on commissions for publication is to have a strong personal agenda. The Telegraph offered me a regular image slot. I began to supply them with images and they published about ten before a reader contacted them with translations of the Braille messages written across the images, such as: ‘Thatcher fucked us’ and ’empty the Whitehall cesspit.’ Although I was sacked on the spot, the important element of this for me was being able to provoke a reaction.’
Joe Magee, Artists Story

a-n archive, 2005
‘In Scotland at least, discussion of artist-run initiatives frequently imply that an explosion of grassroots organisations suddenly occurred and began to flourish, big bang-like, in response to the restrictions and political conservativism of the Thatcher administration in the 1980s. Whilst this is undoubtedly true to an extent, what is rarely referenced is the long history of non-commercial grassroots activity amongst Scottish art communities throughout the twentieth century, particularly those events and projects established with much energy and resourcefulness in the war years of the 1940s.’
Show some initiative, Susannah Thompson, a-n Collection: Shifting practice

www.a-n.co.uk, 2005
‘From the Thatcher years of Enterprise Allowance to New Labour’s social inclusion, artists have always been niched into an ‘agenda’.’
Valuing artists, Creative Clusters

www.a-n.co.uk, April 2008
‘From the early 1980s, and well into the 1990s, UK art culture was hijacked by the marketing strategies of Saatchi and Saatchi, a formidable force in the advertising world. The same company had been responsible for the successful promotion of the Conservative party (and conservative culture) that had led to the election of the Thatcher government in 1979… BritArt’s dominance of the 1990s UK art world – its galleries, markets and press – with a small number of high profile artists, delighted nouveau toffs but disempowered the majority of artists. It degraded and smothered artistic discourse by fueling a competitive and divisive attitude towards a shrinking public platform for their practice and the representation of their work.’
Do it With Others, history of Furtherfield, a-n Collection: Production Lines

www.a-n.co.uk, February 2010
“My painting tends to reflect social change, from an appropriationist/punk aesthetic in the mid 1970s to a rather more polemical response to Thatcherism in the 1980s. I painted larger, more politically motivated pictures in the Thatcher years that reflected the very painful transformation of British society, paintings like No Such Thing, which is a direct quotation from the old girl herself: “There’s no such thing as society”. This was exhibited at the John Moores in 1992.”
Graham Crowley, interviewed by Kate Brundrett

www.a-n.co.uk, May 2010
‘Jenny Saville grew up in Cambridge. She studied painting and drawing at Glasgow School of Art from 1989, catching the end of eleven years of Thatcherism. Unemployment was officially nearly three million, the unpopularity of the new poll tax charge had led to riots in London, and as far as Thatcher was concerned, there was no such thing as society. On April 10 1992, the year of Saville’s graduation, John Major led the Conservatives into power for a fourth term in office, contrary to expectations.

Thatcher’s legacy was powerful, pervasive and left a significant impression on the young artists in the late 1980s and early 1990s. She had successfully appealed to the lowest common denominator and relieved us of any social conscience. The resulting mediocre, banal, mass consumer culture was accompanied by a raw, edgy selfishness and a widening gap between the have’s and have not’s. The yuppy, me-first society was born, with a mindless pursuit of wealth and a tremendous growth in the art market.

The generation of artists emerging from the art schools in the late 1980s (as Saville was just beginning) were known as Young British Artists (YBAs). Government funding cuts had left art schools struggling to survive. Students and teachers were making work that reflected their experiences of what was happening in Britain and their reactions to Thatcherism.’
Creative learnings, Saskia Neary, Artists Talking blog 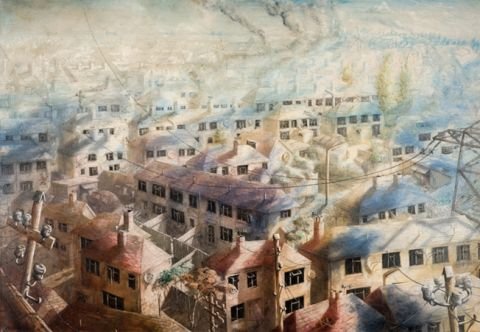