The ecology of culture: a mixed economy with multiple motivations - a-n The Artists Information Company

Last year, the AHRC’s Cultural Value Project asked me to carry out research and produce a report about the ecology of culture. The 43-page report has just been published and can be downloaded as a pdf.

An ecological approach to culture concentrates on relationship and patterns, so I decided to look at how the various parts of the cultural world are linked together, rather than how, for example, opera or am-dram operates. I read a lot of literature and interviewed a wide range of people – 39 of them including a fashion stylist, the conductor of an amateur choir, and a film producer, as well as local authority arts officers and staff from national museums.

What I found was that culture is an organism not a mechanism, and that careers, ideas, money, product and content move around between the funded, commercial, and homemade/amateur parts of the overall cultural world in such a way that those funding categories cannot be disentangled. Everybody is working with a mixed economy model, and everyone has multiple aims and motivations for what they do.

But I wanted to get beyond seeing culture in terms of how it is financed, and to describe the fresh viewpoints that an ecological perspective affords. The concept of ecology helps us to see our position in relation to culture. As with the natural ecosystem, the cultural ecosystem is not separate from us, or related to us, but rather we are embedded in it – it makes us, at the same time as we make it. Culture is always work-in-progress, and always a social process.

Many ecological metaphors, such as emergence, growth, evolution, complex interdependencies, systemic fragility, life cycles, and webs can be applied to the world of culture, and they illuminate the way that culture functions. Biological analogies set up a range of questions, such as: What conditions bring a form of culture into being? How is that form of culture then sustained? What threatens its existence? How can it be nurtured to grow to its full potential?

These questions, and others like them, could help artists, administrators and policymakers to understand both the state of their own specific cultural ecology (for example in a town or region, or across an artform) and what actions they could take to maximise the health of the ecosystem. It also emphasises their limited role – no-one can control an ecology, although they can affect it in benign or destructive ways.

The report goes on to propose three new ways of understanding the ecology of culture. One is to think about culture in terms of a creative cycle: new cultural events and forms feeding on the past, making something new, becoming established, and then being re-worked in their turn. The second is about tracing the webs and networks of connection at a local or an artform level – this helps show how robust and productive the cultural ecology is.

The third model argues that there are four essential roles that have to be undertaken within any cultural ecology. These roles are:

In each case, these roles can be carried out by funded, commercial or unpaid amateur people or organisations. For instance Disney, the V&A, and volunteer heritage groups act as Guardians; and Connectors range from local authority arts officers to commercial film producers. Some organisations carry out multiple roles, but most only one.

The report is really only a first step – an attempt to look at culture from a different perspective, using a different set of words and metaphors. Ecologies are dynamic, productive and complex; treating culture as an ecology and not just as an economy opens up all sorts of new ways of describing and understanding what is going on. 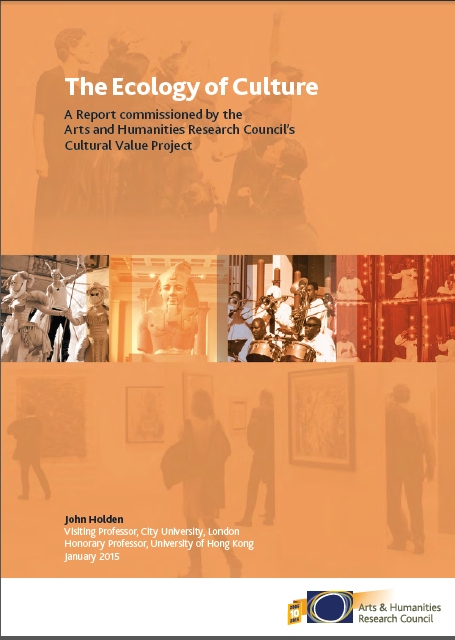