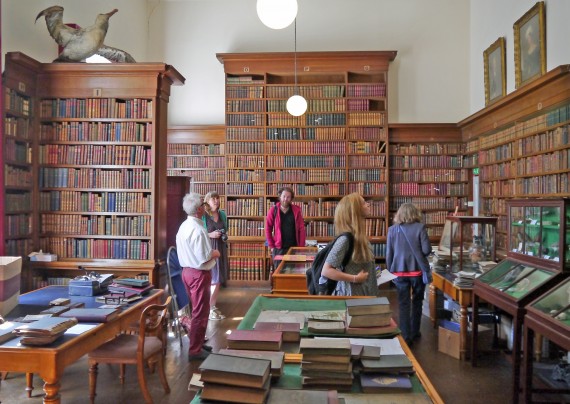 For three weeks in September, the historic market town of Wisbech will become home to the first resident artists of the Arts Colony – a partnership project, initiated and hosted by the Christian mission St Peter’s Lodge and curated by the Cambridge artist-led organisation Aid & Abet.

Artists Paul Johnson, Anna Chrystal Stephens and poet Lois Williams have been selected from an open call. They will research and develop new work alongside Aid & Abet’s curators, David Kefford and Sarah Evans, both practising artists who will also be in residence during the period. “St Peter’s Lodge were looking for an artists’ group to curate from an artist’s perspective,” says Kefford. “They felt that we’d have an empathy with the resident artists.”

Kefford explains that the residency idea stems from the vision of Arts Colony artistic director Father Paul West, who is the local priest at St Peter and St Paul Parish Church. “He’s been wanting to set up an arts colony in the town, based on the MacDowell Colony in New Hampshire in the United States and the Nida Art Colony of the Vilnius Academy of Arts in Lithuania. Artists can spend time in Wisbech like a retreat, in a slightly monastic setting.”

Wisbech has a history of accommodating unconventional and pioneering thought – it is the birthplace of the liberal anarchist William Godwin, slave trade abolitionists Thomas and John Clarkson, and the social reformer and National Trust co-founder Octavia Hill. Fittingly, Aid & Abet’s curatorial concept for the pilot Arts Colony residency invites the artists to respond to ‘the theme of The Frontier Zone – a transitional space offering the psychological sense of unlimited opportunity, the shedding of restraints, or working towards new knowledge.’

The three artists were selected through an open call, which invited them to consider Wisbech as an expanded studio, propose projects ‘that reflect the changing demographic of the town’s communities’ and demonstrate an interest in socially-engaged practice. Each proposal will bring the artists into dialogue with the wider community, and the works, whilst artistically independent, contribute to the Wisbech 2020 Vision plan to revitalise the market town.

Paul Johnson will be exploring the artefacts in the Wisbech and Fenlands Museum as well as working on ideas for a solo exhibition at Focal Point Gallery, Southend-on-Sea. Anna Chrystal Stephens will further her research on living strategies by focusing on Godwin as ‘the first modern philosopher to explore anarchism’. Lois Williams, inspired by the town’s historic figures and thinkers, will collaborate with Wisbech residents to create a map that considers sites of ‘ordinary purpose’.

Kefford describes the approach to each residency as non-prescriptive and open-ended. “We want to try and raise awareness of what the artists are doing, so we’re not putting too much pressure to have outcomes, but we want audiences to get involved.”

Over the course of the residency the artists will have access to the peaceful grounds of the Lodge and the massive, rambling space of The Wisbech Social Institute and Community Space, while on 9 September they will be giving a public talk at Wisbech Castle. The project is funded by Arts Council England and Cambridge County Council, with partnership support from St Peter and St Paul’s Church, The Wisbech and Fenlands Museum, The Wisbech Social Club and Institute and Metal Peterborough.

Kefford is looking to see how the changing socio-economic nature of Wisbech and the integration of its new Eastern European communities might positively influence the future direction of the Arts Colony. “We want it to be an internationally recognised colony; partnering with other residencies on exchange programmes, and connecting with Eastern European countries is an interesting way that it could develop.”

As for the future, Kefford sees longterm potential in the exploratory and pioneering processes that the first residents will take in charting this frontier zone. “It’s a sense of moving into the unknown,” he says. “You don’t know what will happen but it’s really exciting.”