The gallery problem: "Artists need to be able to work in lots of different contexts" - a-n The Artists Information Company 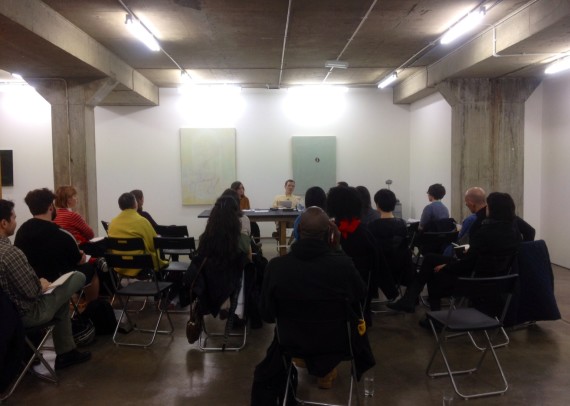 “Now that I have left the gallery, one of the things I realise galleries do absolutely amazingly is that they protect art, that they act as a buffer between funding and the artist.”

Speaking at the panel conversation The Gallery Problem: or, what artists can do when their work doesn’t fit in galleries, Marijke Steedman, curator of Create London, got to the crux of why – alongside validation – artists often aspire to exhibit within the museum framework.

“There’s a really well-versed etiquette or system that kicks into place that ensures that artists aren’t driven to do things that aren’t fundamentally connected to what they want to do,” she continued.

The panel’s shared context of the Whitechapel Gallery, where all three have previously worked – Steedman and Martin within education and Ogg in exhibitions – allowed for an open and honest conversation. They discussed the benefits and drawbacks of the distinct approaches and capacities within education and exhibition departments.

Steedman began the debate with an historical look at recent changes in gallery education – belatedly adopted by exhibitions – spurred by socially engaged practice and the English translation of Nicolas Bourriaud’s Relational Aesthetics in the 2002. Education departments were restructured to be flexible and adaptable to new needs, allowing them to more easily adapt to changes in artistic practice.

Ogg acknowledged the “registerial process of making a show” common to exhibition departments. “It’s really the political and administrative functions around the necessity to sign off on lists of works months in advance of the opening of an exhibition – in terms of making loan requests, creating packing lists, coordinating transport and insurance of works – that has led to an inflexibility in the thinking of exhibition departments within institutions.”

Part of ‘the gallery problem’, it seemed, was the structural inability of institutions to readily adapt to new approaches.

“I’m broadly optimistic,” added Ogg, “because just as we’ve seen performative practices and moving image works very much becoming the canon of what I’ve described as institutional spaces, there has to be a generational shift, as a younger generation of curators are getting jobs within these spaces.”

The future is pop-up and collective

“Are there some practices that artists should just keep out of galleries?” asked Martin. “I think maybe they should keep out of certain galleries,” replied Ogg.

Steedman was more equivocal, bringing the question of money and survival into the dialogue. “I wouldn’t suggest any artist should turn their back on the gallery system. Different projects require different approaches, but if you do choose to make a work that exists beyond the gallery space you have a challenge there.”

The conversation turned to public funding, with both panellists raising concerns about the changing nature of arts funding and its impact on the arts ecology. Institutions are increasingly looking to show artists who have recourse to private sector funding and a collector base.

Ogg, who has a history within artist-led and smaller-scale art spaces – she was a committee member at Glasgow’s Transmission and directed the Showroom in London for 10 years – sees a vast difference in today’s art world compared to when she started out in the 1980s.

She said that the “perceived trajectory of growth” was changing, and that the idea that you set up a space, earn your stripes and “move from limping along on project funding to getting more regular funding” was on the way out.

Speaking in particular of the well-trodden path of many artist-led and independent spaces, Ogg said: “I think that is going to go completely and that we’re going to go into a much more fluid pop-up based period of activity.”

“How that happens, that seems absolutely fundamental to any kind of success. But it’s a little bit like buying a house – the whole system hinges on that it isn’t a level playing field.”

So what solutions might there be to the gallery problem? For Ogg they lie in curatorial courses and the promise of generational change. For Steedman, the recent Turner Prize win by collective Assemble is a marker for how artists can group together to support each other, sustaining both employment and practice through shared resources.

“We need artists that are able to work in lots of different contexts simultaneously,” said Steedman. “I think that’s the way it has to be.”

The gallery problem took its starting point and theme from Validation beyond the gallery, a report published by Axisweb earlier this year. Read the report here