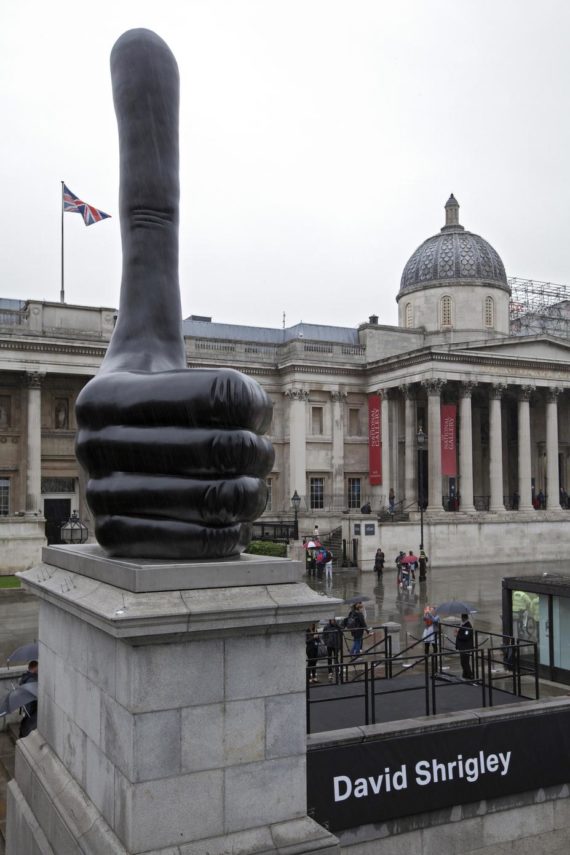 Brighton-based artist David Shrigley‘s fourth plinth commission has been unveiled by the Mayor of London Sadiq Khan at an event in London’s Trafalgar Square.

Really Good is the eleventh sculpture to stand on the plinth. Cast in bronze, the work consists of seven-metre-high hand giving an elongated thumbs up.

Explaining the work, Shrigley has said that things considered ‘bad’ such as the economy, the weather and society, will benefit from a change of consensus towards positivity.

The Mayor of London, Sadiq Khan, said: “The giant thumbs up is wonderfully optimistic. It shows that London is open to the world and that we remain full of creativity and positivity.

“Shrigley’s distinct talent is his ability to capture the imaginations of people of all ages and backgrounds and I know this will be an incredibly successful commission, adding to London’s status as a cultural powerhouse.”

Ekow Eshun, chair of the Fourth Plinth Commissioning Group, said: “This is the 11th sculpture on the fourth plinth, and demonstrates our commitment to bringing the work of leading national and international artists to London. David Shrigley has created a powerful work, rich with humour and insight about modern Britain, that will be enjoyed by everyone that sees it.”

Previous commissions as part of the programme include Marc Quinn’s sculpture Alison Lapper Pregnant, unveiled in September 2005. It was followed by Thomas Schütte’s Model for a Hotel in 2007 and by Antony Gormley’s One & Other in 2009.

The most recent commissions have been by Yinka Shonibare MBE, Elmgreen & Dragset, Katharina Fritsch and Hans Haacke.