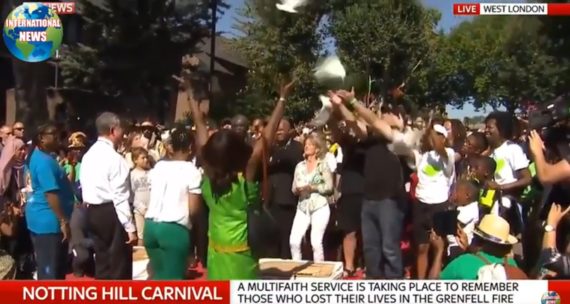 Notting Hill Carnival has paid tribute to the victims of the Grenfell Tower fire with an emotional minute’s silence on Bank Holiday Monday.

The carnival procession and sound systems paused for 60 seconds while outside North Kensington fire station firefighters lined up, removed their helmets and bowed their heads. The minute’s silence was followed by a round of applause from the crowds.

Earlier at the opening ceremony of the festival, dozens of white doves were released as community leaders urged attendees to ‘come in the spirit of peace’.

Kensington MP Emma Dent Coad, who was in attendance alongside London mayor Sadiq Khan and council leader Elizabeth Campbell, told the crowds: “Today is a day to set aside our burden of sadness.”

Clarrie Mendy, a relative of the artist Khadija Saye who died in the fire along with her mother Mary Mendy, told the Independent: “This is for Grenfell and everybody present at the carnival – everybody dead or alive – just have a great time and in peace. We pray for peace.

“A lot of people are finding their voice and saying this is the first time since it happened they’ve actually found a voice to speak. I think they know they’re not alone. They see other people suffering the same plight, they know there’s a collective. That’s why they can talk.”

Two memorial funds have previously been launched in Saye’s memory, with both raising funds through justgiving.com.

The Khadija Saye Memorial Fund was set up by Saye’s mentor and friend Nicola Green along with Dave Lewis and Peer UK director Ingrid Swenson. It has currently raised almost £16,000 towards a £50,000 target.

The organisation Creative Access also launched a crowdfunder to raise £10,000 for internships to encourage young BAME people from disadvantaged backgrounds to pursue a career in the arts. Khadija, whose worked is currently showing in the Diaspora Pavilion at this year’s Venice Biennale, secured a role as an intern from July 2015 to March 2016 at London-based arts charity, Peer UK through the Creative Access programme.

Creative Access has already exceeded its target and has so far raised £10,715.