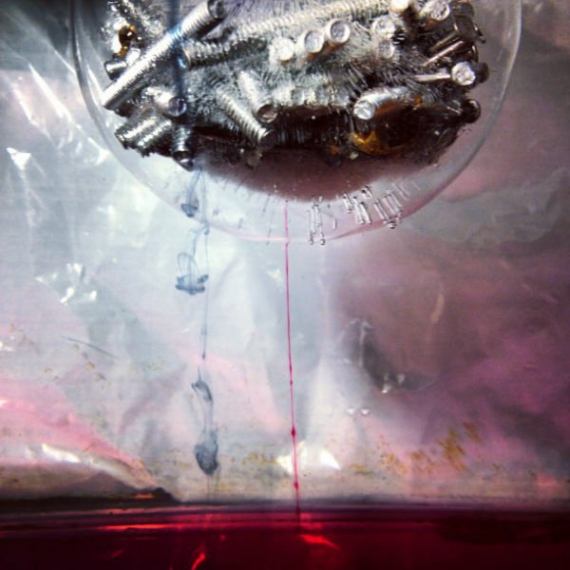 Vantage Art Prize is a new cross art form competition for Leeds, presented by the Departure Foundation and curated by local artist Adam Young. Work by 45 shortlisted artists will be on display tomorrow evening (Thursday 21 February) for a one-night event at Ellington House, an 80,000 square foot former office space sited on a hill overlooking the city centre. During the evening, a panel of six judges will select three winners to receive £1,000, £300 and £200 awards.

“I am interested in the ethics of prize giving,” says Young, “and I don’t really have an answer. For me, Vantage is about sustaining practice – not necessarily about the money or the prestige.”

The prize has indeed acted as a catalyst for the creation of new work – of the 45 pieces in the shortlist, around 30% were proposed specifically for the event. Perhaps due to its one-night format, or perhaps in acknowledgement of Young’s own background in live art, many of the proposals he received were for time-based or performative works.

“The shortlisting was quite an instinctive process,” he says. “I didn’t apply specific criteria, I simply selected work that interested me, looking to understand each proposal as best I could and contacting artists if I had any questions. I was also looking for a through-line, so the works would make sense as an exhibition.”

Young’s selection reflects his interests in community-focused and participatory practices, celebrating risk-taking work with a political or socially-engaged stance. “There’s nothing overly academic in there,” he says. “What comes across is a sense of immediacy, of humanity. There’s work that questions the art scene around it, and work that questions the very nature of art prizes.”

Young recognises the democratically minded, artist-led approach of the Woolgather Art Prize – which ran in 2011 and 2012 – as a kind of precursor to his project. Artist John Slemensek, who coincidentally is also on the Vantage shortlist, is one of Woolgather’s founding members.

“Perhaps it did set a bit of a precedent,” Slemensek says, “in terms of its spirit of get up and go. Woolgather is about the whole DIY scene coming together, working with friends and professional allies and being stronger together for it. Vantage feels like quite a homely prize in that many of the artists and judges know each other – maybe that’s inevitable within the small workings of a local scene.”

Young admits to being “quite Leeds-centric” in his approach, committed to the city – where he studied on Leeds Met’s acclaimed but short-lived Art, Event and Performance BA – and to the DIY community around him. He describes the scene as over-subscribed (Vantage received 114 applications over a very short submission period, and though geared primarily towards students and recent graduates, many of these came from mid-career artists). He suggests that, while Leeds is an exciting city with lots going on, what might be lacking is a strategic infrastructure, a clearly defined ladder for artists’ career development.

It is precisely in this kind of context that the Departure Foundation aims to operate. The London-based charity was established in 2012 to support and promote contemporary art in the UK, running exhibitions, art prizes and education projects for local communities and providing studio and storage space for selected artists.

“The project has, in a sense, arisen in response to the recent cuts to the arts,” says Director Robert Wort. “Our objectives are to promote art on a country-wide level, supporting artists whose work might not otherwise get shown, or who may need a bit of extra assistance.”

Unlike many charities, Departure’s administrators work on a voluntary basis so that funds can be channelled straight to artists and curators such as Young, who are recruited by the Foundation on a project-by-project basis. Young applauds Wort’s respectful, non-interventionist approach – once appointed he was offered complete freedom to decide how the project would run. “I’m not an artist or a curator,” Wort explains. “We work with people who have the specialist skills and local knowledge we don’t have. Our mission is to help artists be self-sustaining.”

Both Young and Slemensek have noticed a similar move towards nurturing independence within Leeds’ own art ecology. “Historically, things have been very much DIY-led,” says Young, “but recently I’ve noticed more dialogue between the artist-led organisations and the larger, publicly-funded players.”

Slemensek agrees: “It’s almost as though the Arts Council are prepping us in case they can’t sustain their support in the future. They are funding the kinds of projects that are altruistic, that by their very nature help others, so that if the money goes we are able to stand up on our own.”

“We set up Woolgather in response to a lack of exhibition opportunities,” he adds, “but things seem to be changing – there is so much cultural vibrancy in the area now.” He mentions two new art spaces opening in Leeds this month, the artist-led XO Gallery and &Model, a showcasing and selling platform for artists and designers that is part of the city’s Regeneration through the Arts initiative.

“Perhaps it is a response to the current climate and all the changes in funding to the arts,” says Slemensek. “When you feel frustrated with positions you just have to go for it and make things happen. It’s what any creative person does.”

Project Space Leeds: “It’s all there for the taking” – We pay a site visit to PSL’s new home and speak to co-directors Pippa Hale and Kerry Harker about their plans.