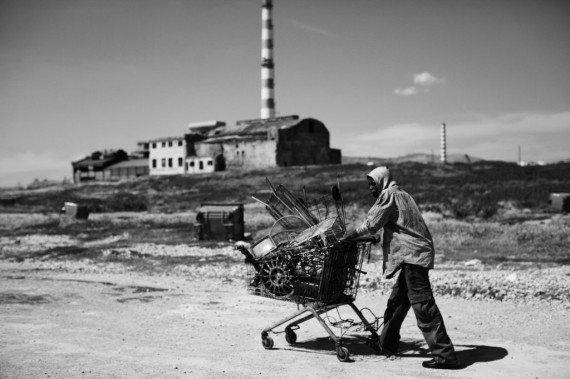 “There are so many different routes into the Biennale now,” says Katrina Brown, Director of Glasgow’s The Common Guild. “There’s more diversity of age and career.” Brown and her team are curating the 2013 Scotland + Venice presentation – featuring artists Duncan Campbell, Corin Sworn and Hayley Tompkins – a role secured by a process of open curatorial submission.

Scotland celebrates ten years at Venice this year. While there have been some exceptions (in 2007 National Galleries of Scotland curated the exhibition; in 2009 DCA (Dundee Contemporary Arts) was invited to curate as part of its 10th anniversary year), the open call for a curatorial partner has been the preferred approach since the first Scottish pavilion in 2003, which featured Claire Barclay, Jim Lambie and Simon Starling and was curated by Francis McKee and Kay Pallister.

Scotland isn’t the only country to embrace the open call across the 80-plus national presentations and over 40 collateral events; it has become an increasingly popular selection process at the Venice Biennale. As such, it could be argued that it has never been easier for artists to participate in the world’s most prestigious art event.

Wales also made its debut at the Biennale in 2003. Over the last ten years it has tried and tested a number of different models. For its first presentation, Arts Council Wales (ACW) decided to appoint a commissioner, who then advertised for curatorial propositions. Once submitted, these went to an advisory panel to make a decision on who would be curating the show. For the 2011 Biennale, a decision was made to take a different, simplified, approach.

“Two biennales ago, following the John Cale exhibition in 2009, we decided to go ahead with totally open submissions for the 2011 Biennale and use an advisory panel to sift the submissions,” explains ACW director David Alston. “We received over thirty really wide-ranging submissions and we were looking to appoint teams – so that a proposition would come with project management, a curator and an artist.”

To do this, they used the architectural competition format and paid shortlisted applicants for a development phase prior to making their final selection. The result was a show by Tim Davies, curated by Tom Rowland. For this year’s presentation – The Starry Messenger by Bedwyr Williams, jointly curated by MOSTYN and Oriel Davies – the process has been changed again.

“It’s still by open submission but we went to the gallery network Visual Arts and Galleries Wales (VAGW), which includes the publicly-funded galleries and a number of the artist-run spaces,” says Alston. “So it was both open and restricted. Since part of our reason for being in Venice is to help support the visual arts infrastructure in Wales, we wanted to test the water for that model.”

While the devolved nations of Scotland and Wales have embraced variations on the open call approach, the venerable institution that is the British Pavilion – a fixture at the Biennale since 1907 and programmed by the British Council since 1937 – takes a different approach.

Since the 1960s, the job of choosing the artist or artists who will represent the UK in Venice has been done by a committee. Featuring eight independent curators and arts professionals who change for each Biennale, it is always comprised of representatives from institutions across the UK. This year’s panel included Camden Arts Centre director Jenni Lomax, Maoliosa Boyle of Void Gallery, Derry, and Ben Borthwick, at the time director of Artes Mundi. Each committee member nominates artists for consideration.

“I think we are the only pavilion that selects their artist by committee in this way,” says Emma Gifford-Mead, who is curating this year’s Jeremy Deller exhibition. “For the British Pavilion, we want a great artist (or artists) but we need to consider whether they are able to handle the pressure that an occasion like Venice brings with it.”

“Venice is one of the biggest international arts events in the world, and so if an artist has not had some degree of press experience or media attention prior to showing in the British Pavilion, this can be quite taxing for the artist to manage – especially whilst they are trying to create new work, which will be showcased (and interrogated) on a world stage.”

While it might make sense to assume that long-established pavilions in the Giardini would have a more closed process compared to the younger pavilions and projects sited throughout the city, this is not necessarily the case. Two of this year’s new pavilions, Paraguay and Tuvalu, have both made their selections through appointment, while Giardini-based Greece and Poland hold open calls for curatorial propositions.

“I do not know if it is unique, I rather believe it’s a common process,” Syrago Tsiara, curator of this year’s Greek presentation observes. Tsiara is “mainly interested in artists whose work has a meaning for the social and political context.” For the Greek Pavilion, she has commissioned Stefanos Tsivopoulos to create History Zero, a new film of three parts exploring human relationships and economic exchange.

Luxembourg has embraced the open approach since 2011; previously, artists were chosen through informal conversations between Luxembourg curators and the Ministry of Culture. “The fact that it’s an open opportunity definitely creates hope in the Luxembourg arts scene,” believes Kevin Muhlen, Artistic Director of the Casino, Luxembourg’s Forum for Contemporary Art.

Muhlen was one of the curators of the Luxembourg Pavilion in 2007, 2009 and 2011, so he has seen both approaches in action. “In 2010, it was decided to do it more transparently and the first open call went out,” he explains. A strong advocate of the new approach, he believes it brings energy and excitement to the process. “It’s engaging and challenging for the artists – it’s exciting for them to know that they that can submit a proposal and that they don’t have know someone who knows someone to be considered!”

Luxembourg has a track record of taking chances with its young artists, and this small country’s art scene has been growing in its scope and ambitions since being European Capital of Culture in 1995 and hosting Manifesta 2 in 1998. Since the inception of the open call, the Casino Luxembourg and Mudam Luxembourg will alternate directorship of the Luxembourg Pavilion every four years. This year the artist Catherine Lorent is working with commissioner Clément Minighetti and curator Anna Loporcaro from the Mudam.

“The aim of having an open call is to allow people to make a proposal that maybe the directors of institutions would not immediately have thought of,” says Muhlen. “This way, new talents can be discovered; new associations between artists and curators can be developed. Things can happen that might escape the basic schema of arts institutions. And it’s surprisingly interesting how it works – we get good, interesting proposals.”

UK-based Macedonian artist Elpida Hadzi-Vasileva found out about the Macedonian Pavilion’s open call opportunity while building connections between Eastern European institutions and two British and Belgian galleries, for a project they were trying to get off the ground. It was during a visit with the National Gallery of Macedonia that the curators asked her to submit with them to the open call as an artist-curator collaboration.

“Most of my work deals with a particular space that I usually try to expose. So I started to look into diseases and particularly the plague, how it moved from east to west,” says Hadzi-Vasileva, adding that her family have helped form a small-scale production studio in her hometown to produce the time-consuming large-scale installation.

While there is a wide range of different approaches to determining the national presentations at Venice, it’s clear that, whether directly or in a more oblique way, the national context always plays its part.

“Clearly there is a way in which nationality and identity within the curatorial proposition is still quite political and curated in Venice,” believes David Alston, “and I think this political dimension is one of the things that distinguishes Venice from other biennales.”

Whatever the process of selection, one thing all the commissioners and curators seem to share is a belief that, ultimately, it is as much about the right time as the right artist. “The quality comes first and then the selection committee look at where the artist is at that moment of their career,” says Muhlen.

Greek Pavilion curator Syrago Tsiara makes a similar point, if in a rather more poetic way: “It is a question of synchronicity of mentalities, which I cannot really explain to you. It either happens or not. You just feel it when it does.”

The 55th International Art Exhibition runs from 1 June to 24 November (preview 29-31 May). www.labiennale.org

Wales in Venice: “Bedwyr Williams one of the artists of the moment” by Stephen Palmer. Read on

AIR Council member to show at Venice Biennale. Read on