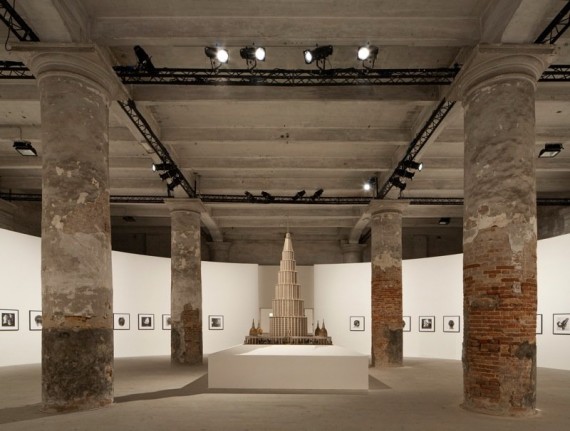 The Kraken has risen for the 55th time, drawing itself up out of the canals and extending its reach into every disused building, church, park, alleyway, boat and purpose-built pavilion on the film-set known as Venice. This edition, The Encyclopedic Palace, takes its title and curatorial foundation from the ideas of Marino Auriti and the museum he wanted to build housing all the world’s knowledge.

As a basis for a biennale, this is both interesting and curatorially canny; an exhibition about all the knowledge in the world can hardly be accused of including anything superfluous or irrelevant. That said, the exhibition at the core of this year’s biennale, split across the two key sites of the Giardini and Arsenale, is engaging, inspiring, beautiful, dark, amusing, enlightening and, above all, well-curated. This genuinely feels like somebody’s attempt to make sense of such a gloriously-ridiculous idea.

The place to start is in the curated element at the Arsenale. The first thing that strikes you is the architecture within the architecture; the Arsenale is well-known as a beautiful, if dilapidated, beast, but it’s had a slight face-lift (or maybe keyhole tummy-tuck) in the form of internally constructed spaces. Gone are the rough brick walls and in their place has appeared a classic white-cube lining, perfectly constructed and only rising to a height that allows a glance upward to remind you where you are. I’m not normally a fan of white-cubing an inherently beautiful old space, but this has been as considered as the works that are presented and really adds to the ebb and flow of your experience.

In this first room is Auriti’s own model of his palace – a beautiful architectural model of an impossible dream. It’s only when we look at the ubiquitous information panels on the wall that we see the ramshackle odds and ends Auriti used to mock-up his vision, including the likes of hair combs. Surrounding the model, on sweeping circular walls, are JD ‘Okhai Ojeikere’s photos of Nigerian women and their immaculately sculpted hair, maybe a further nod to the power of the hair-comb-as-sculpting-tool. In the next room, Roberto Cuoghi’s Belinda looks like it’s come straight from the set of the latest Alien blockbuster, and sits alongside Lin Xue’s meticulous bamboo and ink drawings of imaginary landscapes; alien, familiar, organic and intriguing, all at the same time.

Eliot Porter’s early photos of birds in flight are painterly, beautiful and biologically representational, sitting opposite Eduard Spelterini’s aerial photographs; revolutionary in the early 20th century when they were taken and still just as revealing and wonderful today. This introduction to the Arsenale is a good example of what the show does so well overall, juxtaposing the real with the imaginary, but meeting somewhere at their outer edges with enquiry and fact. If at any moment I was to be told that what I was viewing as fact were fiction and vice-versa, I doubt whether I would question it.

Bastard sons of Bosch and Goya

Jakub Julian Ziolkowski’s paintings are the bastard sons of Bosch and Goya. These are next to Phyllida Barlow’s texturally and visually weighty sculptures, hung from the ceiling, looking like they could have been wrenched from the landscapes in the paintings next door. These couplings appear to run throughout the show. Another curved room containing every page of Robert Crumb’s illustrated Book of Genesis comes as a visual surprise and change of direction. As you round the central curved wall, another space within a space, we realise that Crumb is one side of a conversation with Shinichi Sawada’s clay sculptures of fantastic masks and figures; bizarre cartoony little characters that could only have been born of a creative mind or an angry God.

Then we meet a show within a show: an entire section of the exhibition curated by Cindy Sherman, ‘an imaginary museum that focuses on the representation of bodies and faces’. This section would function as a well-curated and engaging show anywhere and its inclusion in this wider exhibition just adds another layer, change of pace or narrative twist to our overall experience. The works contained within are visually what you’d expect from a Sherman curated show, but this doesn’t mean it’s in any way obvious.

Paul McCarthy’s over-human-scale anatomical soft toy greets us, sat on a plinth, smiling, with its internal organs in its hands. Sergey Zarva’s paintings on the cover of OгoHёк magazine look like they could be test ideas for a new set of Sherman photographs; distorted, uglified and smiling faces stare back at us. In the preview crush, Duane Hanson’s Bus Stop Lady only reveals its true identity by the keep-your-distance square marked on the floor, leading me to momentarily believe I was standing next to Melissa McCarthy on a break from filming Bridesmaids 2.

As I passed from the Arsenale to the Giardini, artists appeared from every direction like chuggers on a Saturday afternoon high street. A man on a bridge drinks glasses of water, then smashes them on the floor; another burns plastic soldiers on a china plate, then smashes that too. A man hands me an unintelligible flyer, then his twin reclaims it from me 50 yards further on. Another man lays a long, single line of incense sticks, end-to-end. At no point am I sure if I’m participant, viewer, witness or prop.

The Giardini is best known for its national pavilions, of which more in a moment, but the main exhibition has another significant presence here, extending the breadth of what we’re being asked to consider and continuing in its coherently scattergun dance around a vast array of different ideas and narratives.

If anything, this part of the show seems to discuss, more directly, the curator’s interest and take on The Encyclopaedic Palace, at the same time showing us how and why such a place is impossible, but revealing artistic attempts to harness this intangible knowledge and represent it to the world. I’m left wondering if one of the notions being explored is that art is somehow superior to mere knowledge, and whilst we willingly institutionalise the preservation of great art, it’s too messy and all-enquiring to ever be truly contained or held anywhere.

Necessarily, the approach in this section feels more museum-like, but that’s not to say the show becomes dry or formulaic at any point. Highlights include the architectural models of Austrian insurance clerk, Peter Fritz, discovered by Oliver Croy and Oliver Elser in a junk shop. This vast collection of models represent a very real take on the world; farm buildings, gas stations, modest family homes, banks and churches. Fritz clearly wasn’t trying to reinvent the architectural wheel, but these models allude to an imagined world, barely different from our own, but a world created by Fritz nonetheless.

My absolute highlight of this part of the show came just as my energies were fading once more and I emerged in to a room of Fischli and Weiss clay sculptures, Suddenly This Overview (1981-) – hundreds of small clay sculptures, each individually vitrined and plinthed and set at varying heights around the room. It’s a joyfully overwhelming experience moving between them: ‘Charlton Heston kisses Dr Zira in Planet of the Apes’, ‘Sewer Controlling’, ‘The House of the Idiot’, ‘Trying Not to Smoke’, ‘Roald Amundsen asks for directions to the North Pole’.

These seemingly disconnected fragments add up to some sort of coherent whole: ‘Ugly and Cute’ (clearly a clay model of E.T.) sits next to ‘Anna O dreaming the first dream interpreted by Freud’. Nothing directly connects any of this stuff, but it all makes sense together, highlighting how we need all of these things to try and make sense of the world. This room, as a single element, seems closest out of anything to representing what an impossible task The Encyclopaedic Palace is.

As ever, in the context of a launch like this, videos function more as inconvenient bottlenecks than moments to sit and wonder, but the works that are here, by the likes of Tacita Dean and Artur Zmijewski, don’t request that you sit for hours, allowing them to function equally in the general mix. This mix and flow of the exhibition feels as considered and curated as the works within it. It functions like a piece of music or a good film, drawing you forward on a series of waves and lulls, peaks and crescendos, that continue to reinvigorate your interest just as you start to feel the enormity of the art-viewing task at hand.

So, to the pavilions. Where does one begin? Not with the ones that didn’t even manage to be ready for this 10am launch on a warm Venice Wednesday, a list that included France, Denmark and a half-finished Czech pavilion.

Jeremy Deller has pulled of an excellent show at the British Pavilion. After a lacklustre retrospective at the Hayward, I was unsure that his particular brand of cultural anthropology was capable of successfully mapping across into these kind of managed environments, that deal primarily with objects and documentation. What’s on display here is a more self-contained Deller, less reliant on a physical or personal engagement with others for the creation of the work. But it’s certainly no less Deller, jumping from the endangered hen harrier (and the purported shooting of a pair of these rare birds by Prince Harry), to David Bowie, to tea, Jersey tax protests, David Kelly and flint axes discovered in a gravel pit as it was transformed into an EMI record pressing plant.

On one level, the show feels like a conscious celebration of Britishness, but at the same time points out how crap things can be too – strikes, barricades, the troubles and high ranking suicides, amongst other things. What it does do, overall, is present an artist who’s just fascinated by the world and how all this stuff might fit together – very much in keeping with the main theme of the Biennale.

Other pavilions worth mentioning are Israel, with a solo presentation that slowly reveals itself as you move round the show, repositioning me from being annoyed at what looked like a video of a self-indulgent sound performance to engaging in a full narrative experience, quite primal in its construct and ideas. Also Japan, in part engaging in ideas of communal or collective endeavour, and exploring the positives and negatives of this. The pavilion is a collection of videos, objects, photos and moments that attempt to reach out, bring people together (physically or metaphorically) and make sense of experience.

It was interesting to note which pavilions drew prohibitively long queues and simply stayed that way. These included USA, Germany, France (once it opened) and Finland. I’ll be honest, I didn’t queue, so have no idea of the encyclopedic delights contained within.

The 55th Venice Biennale opens to the public from 1 June – 24 November. www.labiennale.org

Plus more Venice Biennale reviews in the Interface archive.