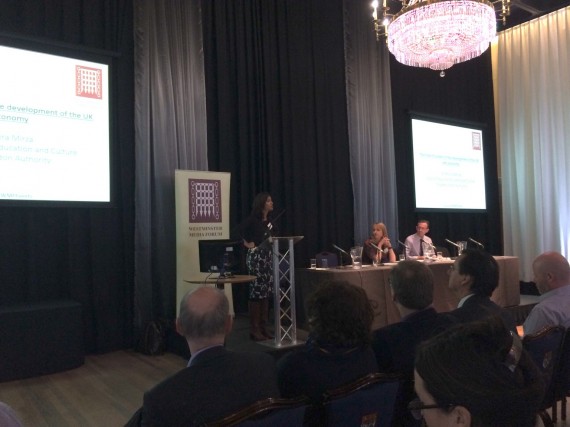 The latest in Westminster Media Forum’s series of conferences at Glaziers Hall, London looked at priorities for the UK’s arts and culture funding in a four-hour discussion that certainly packed a punch.

And with speakers limited to around 10-minute slots, the message was made pretty clear – there’s a lot to discuss and not much time to do it.

Unsurprisingly, a recurring theme was the new government white paper which will set out a vision and agenda for the future of the arts, culture and heritage sector. Due to be published towards the end of this year, the Department for Culture, Media and Sport (DCMS) will shortly start a series of online, open discussions to inform the paper.

Dominic Lake, deputy director (arts, libraries and cultural property) at DCMS, explained the need for the document. He said: “It has now been 50 years since the first white paper on arts. Following the election, the new culture white paper will consider how we can maintain excellence in the arts. This includes the role of individuals and the artist.”

Lake added: “It will also look at new funding models. Each area is intertwined and will influence the next government spending round.”

Mirza used her contribution to reiterate the importance of artists within the sector, warning that more needs to be done to support them, particularly in London. “It is a tale of two cities: London is very rich but also poor and artists are finding it incredibly difficult to live here.”

Mirza warned that rising house prices are pushing artists away from the capital, and that this doesn’t necessarily mean good news for other areas of the UK. She said: “House prices are going up but also studios are closing down fast. Land owners are seeing the value of their land rising and the result is we will lose a third of artists studios in London in next five years. However, they are moving to Berlin – not Manchester or Bristol.”

Mirza suggested a number of boroughs across the city are trying to attract artists to their areas, citing Barking and Dagenham as positive examples that have employed creative enterprise zones.

Tallant was equally concerned about an artists’ exodus. She felt more needs to be done to help artists, particularly after their skills and expertise have been utilised as part of regeneration schemes. “We want artists to imagine the future along with residents of the city. We want artists to be able to have a house and live well too.”

Another focal point for the event was education and the pressing need to improve children’s engagement with the arts. Explaining the findings of the Warwick Commission Report, Professor Jonothan Neelands from University of Warwick Business School said this was one of the most crucial challenges facing the sector.

He asked the audience: “How do we lift up children and others to make their mark on the world? It is a critical question. When we talk about diversifying it’s not just audiences – we need to diversify artists and policy makers too.”

With a warning that the results will be art that is limited to socially and economically advantaged groups, Neelands added: “It is clearly a social injustice issue, but also it is bad for business. Despite the richness of variety we have got in this country we still spend a low amount of GDP on cultural services.”

The final section of the conference saw Laura Dyer (executive director, North, Midlands and South West, Arts Council England) state that one of the immediate challenges is the Spending Review, set for 25 November. She said she was positive regarding the outcome, stating that the arts sector needs to be proud of what it is achieving.

“We [Arts Council England] have made a submission to the Spending Review asking for growth,” she said. “We are confident in what we do and cutting us wouldn’t make much difference in terms of savings.”

Explaining that resilience can be both good and bad news, she said: “We are at a tipping point. Although many organisations have withstood cuts so far, they cannot continue to do so. We need to look at alternative funding models whilst also widening participation and engagement.”

Dyer concluded by telling the audience: “Be the change today that you want to see tomorrow.”