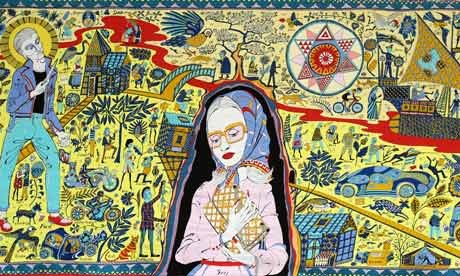 “I do not want art for a few any more than education for a few, or freedom for a few,” the famous William Morris adage goes. It seems fitting then that the fully refurbished exhibition space with three new galleries, learning resources and Georgian orangery-inspired extension will allow more people to enjoy more art from one of the foremost artists and original thinkers of the nineteenth century.

A socialist pioneer, William Morris, born in Walthamstow in 1834, was also the well-known founder of the Arts and Crafts movement, supporter of the Pre-Raphaelites, designer, craftsman and visionary, whose work still influences these fields today. Now, thanks to the transformation, audiences are given a chance to view previously unseen works as part of the 600 objects that are on display over 12 galleries, exploring different aspects of Morris’ life.

Turner Prize-winning artist, Grayson Perry, will be the first to exhibit in the new temporary exhibition gallery with his Walthamstow Tapestry, a precursor to the pieces produced during his highly-acclaimed Channel 4 documentary series, All In The Best Possible Taste, where Perry travelled throughout the UK to explore British taste using his findings as inspiration for an epic artwork currently shown at Victoria Miro Gallery in London.

Talking about his admiration and deep respect for the work of Morris, he said: “I love ornate pattern and this is where Morris excels, his work has a joyous sense of design that provides visual delight and is immediately accessible to everyone.

“Morris typifies what makes places like Walthamstow special. A place that most people think is just an ordinary part of London is actually rich with interesting people, histories and social and political activity. The most famous textile artwork for most Britons is the Bayeux Tapestry so I wanted to echo that. But I wanted the title to reflect it is about all our lives and Walthamstow exemplifies the idea that behind the facade of the average is there so much more.”

The Walthamstow Tapestry runs until 23 Sept 2012.