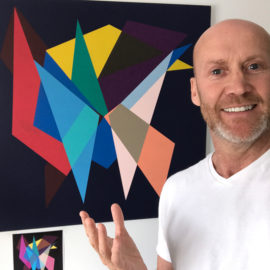 Fraser specialises in geometric abstract focusing on multiple colours, sharp lines, three dimensional shapes and multi layered optical illusions. Fraser prepares his visions by using layers in Photoshop before transferring his creations to ‘one-off’ original pieces painted with acrylics on canvas, birch-ply or aluminium surfaces. Fraser also creates digital prints limited to editions of 10 all of which are signed and certified. Fraser was born in Edinburgh in the late 60’s. On leaving school Fraser took two years out, touring the US before returning to the UK and then residing in London for 25 years. In 2015 Fraser relocated to Yapton, Arundel where he now resides. From the early 90’s Fraser performed in a touring cabaret troupe that took him around the world, performing in the countries of all 5 continents. Apart from performing, Fraser created costumes, stage props, backdrops and promotional material and during this time his passion for creating became his new focal point. By the end of the 90’s, around the time of the .com boom, having found his creative flair, a change of direction towards the design and development of websites began. Since the turn of the century, Fraser has taught himself how to use all the tools of the trade needed to create, manage and maintain websites. Using programs such as Paintshop Pro, Paint, Illustrator and the industry standard, Photoshop Fraser’s self taught Graphic design skills have moved him into creating physical art from digital creations. Fraser’s studio is located within his home in Yapton where he showcases his work in the physical form. Both his art and digital prints will shortly be able to be purchased online. watch this space! Arundel, West Sussex 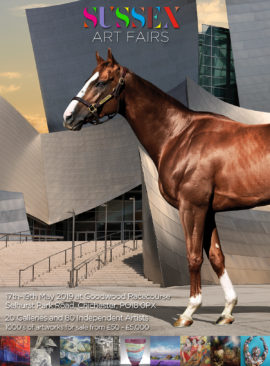