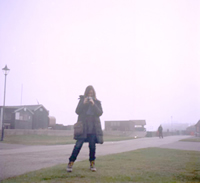 Visual artist with particular focus on site-specific installation and engaged practice. Contributor to a-n since 2003. Senior Lecturer in Fine Art at University of Suffolk. East Anglia