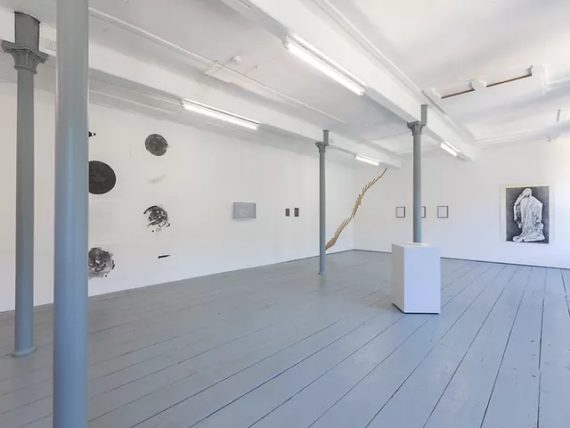 There’s a wonderful lightness to the Phantom Limn show at 9A Projects, Todmorden. Entering via the stone stairwell of a Victorian mill, you’re suddenly transported into light, suspended in the clean, white space of a gallery, with large windows and eye-level views of trains silently crossing the viaduct opposite. The exhibition presents work from eight artists, and the space offers plenty of room for the eleven pieces to breathe and for you to wander, making connections. The larger pieces are unframed, sheets of white paper, hung simply. Mostly monochrome with some muted hints of colour, the work on show is all drawing based, which in some pieces emerges as animation, in others there’s a focus on the mechanics and materiality of drawing.

Chronicles, the title of the show, hints at a record; of a time or an event – possibly the record of this group’s latest collaboration. Manchester based artist David Mackintosh seems to be instigator of this current, international experiment. Mary, Hilda, Jim (and me), a piece of creative fiction written collaboratively is the starting point of the experiment. Copies of this text, edited by Rebecca Fortnum, are stacked neatly on a plinth in the gallery. There’s no direction about which artist has written which section of the ‘story’, a perfect metaphor for collaboration.

Texts, stories are a significant thread within the show. 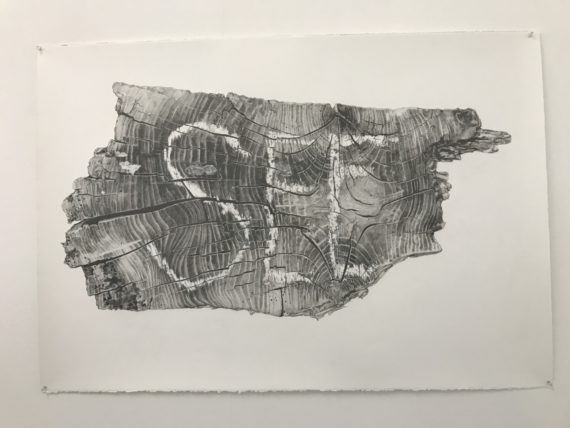 Kelly Chorpening’s intricate, almost forensic drawing of tree bark from which the word SEE emerges, is partly a response to her residency at the home of Laurence Sterne, eighteenth-century author of experimental novel ‘Tristram Shandy’. In its intricacy, Kelly’s piece seems to explore the relations between looking and seeing, the word SEE emerging as white space. Vèronique Devoldère’s ‘The Absorption in the Detail’, a constellation of graphite drawings, explore a monochrome colour wheel, suggesting a connection with the section of Mary, Hilda, Jim (and Me) where a young woman discusses colour theory. In Devoldère’s wheel the solid black seems to bleed, dissolve or become absorbed into the white paper. 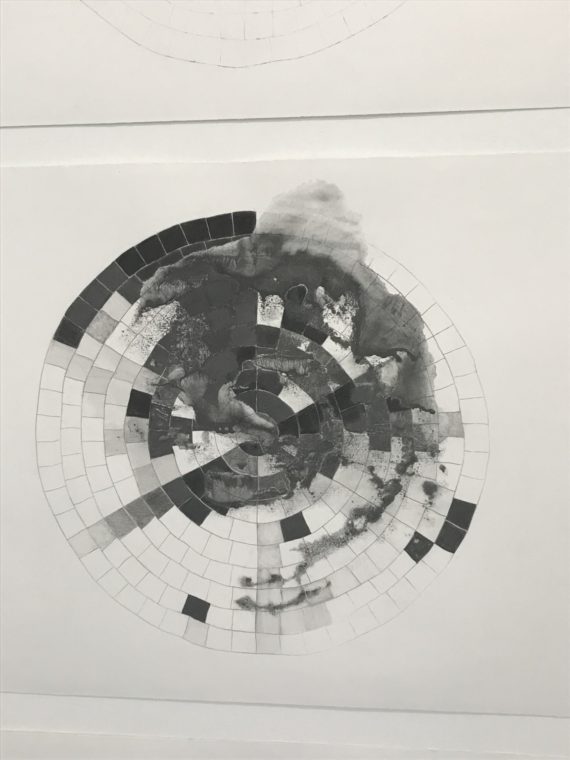 In Mackintosh’s animation, ‘Sad Dog’, a review from Artforum International, written by Jeffrey Weiss(Melancholy, Genius & Madness in the West, 2005) is recited verbatim by a voice actor. On screen this voice emanates from a playful drawing of a sad poodle in a shopping mall. 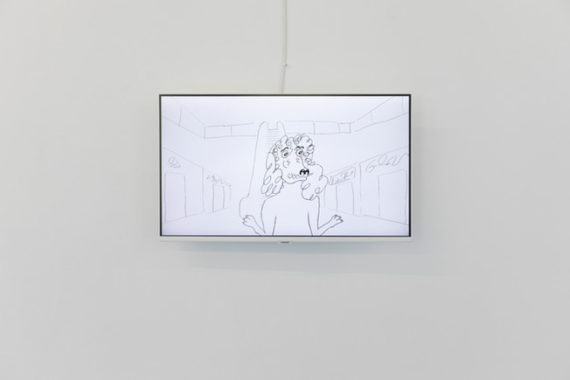 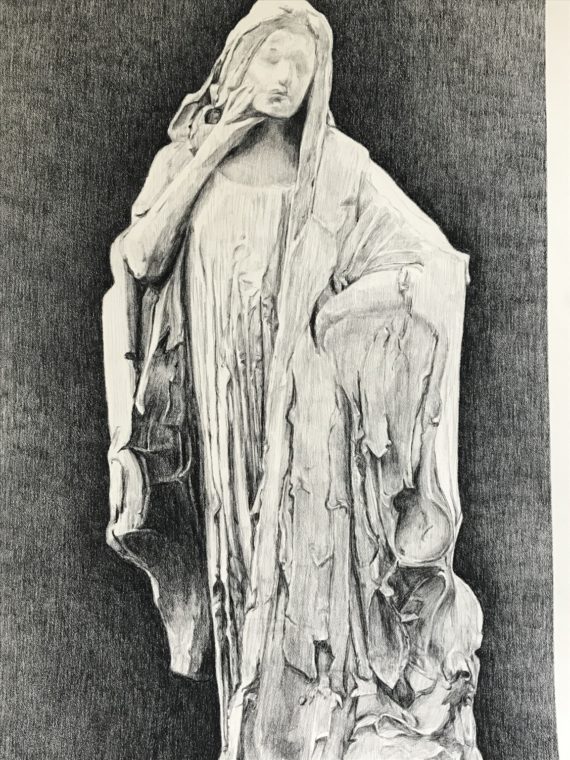 A series of untitled pieces by Marc Nagtzaam suggest a print or text (possibly a found text) has been redacted, then worked over repeatedly with graphite. There’s a sense of something being obscured or rendered abstract, inviting closer scrutiny and a sense of ambivalence about erasures and the agency behind them. 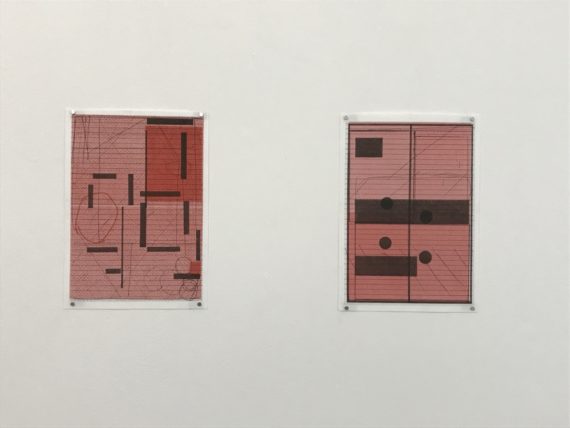 Close by, threading its way across the juncture of two walls is ‘Level Register’ by Stuart Bennett. Assembled on site, in response to the space, a series of pearwood curves, instruments used to make technical drawings are used instead to form a sinuous spine-like curve that cuts through the space. The result looks skeletal, suggesting an object from a natural history collection. The objects and the evidence of marks made by the artists as he measured and placed this set of vintage arcs point perhaps to the foundational role of drawing in art practice and experimentation. There’s also a real sense of the hand in this piece, a desire to reach out and make contact. 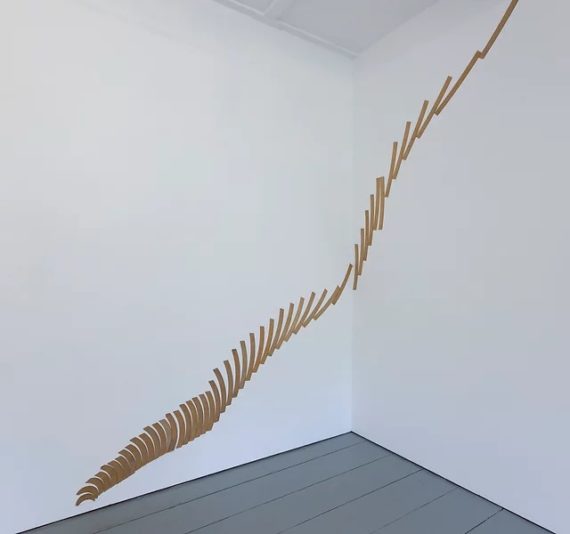 Dean Hughes’ ‘Thread on and Through Paper’ picks up the sense of spontaneity evident in Bennett’s response to the space and in Mackintosh’s simple sketch of a sad poodle. Here, the act of dropping threads on a sheet of paper, evokes the simplicity and nowness of mark making – stitched into place, they seem to hover above the white paper, like words waiting to land. On the opposite wall Hughes presents a series of three small pieces featuring shapes that emerge physically from white paper, coaxed into being by folding, gluing; the flat surface becomes three dimensional via small, subtle interventions that generate a sense of light falling through a window. 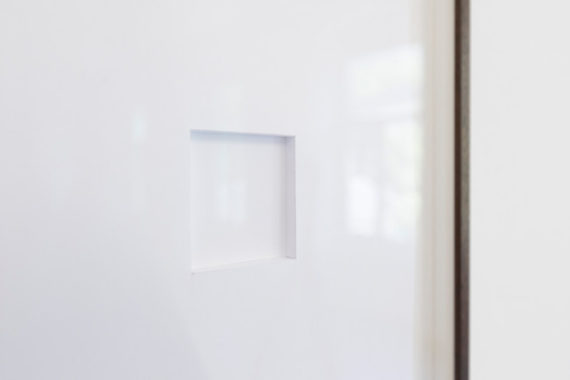 The participants in this international, collaborative drawing experiment are all educators as well as artists. Specifically, they teach drawing in university art departments in England, Scotland, France and the Netherlands. The unfussy lightness of the show belies the weight of experience and skill that shapes Phantom Limn. You come away sensing the various manifestations of time in Chronicles – historic time, its weight, its erasures and the clarity of a single moment.