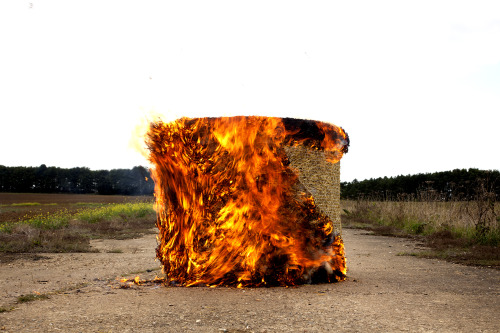 ‘Some say the world will end in fire, some in ice…’ – wrote poet Robert Frost. Fire & Ice, current exhibition at the UK’s new, award winning space for exploring art and the environment, GroundWork Gallery, explores climate change, delivering caution for the future of humanity. Curated by Veronica Sekules, director of GroundWork Gallery (former Deputy Director of Sainsbury’s Centre for Visual Arts), Fire & Ice brings together the work of mother and daughter, award winning artists Gina Glover and Jessica Rayner, as well as Crafts Council #Hothouse14 maker, ceramicist Hilary Mayo. The works are fused with light, dark and balance. But they also burn with hope.

‘I’m interested in resourcefulness. Things that seem fragile that actually have tremendous strength, like a block of ice’, says Sekules.

Gina Glover’s new black and white series of landscapes, dramatically entitled, Poisoned Water Runs Deep, documents fracking sites in the United States. Fracking is not well known for its physical devastation, as well as its environmental impact – the works are uncompromising, startling in their call for action. But though the devastation caused by fracking is stark, the world is not black and white. Contrasting with her mother, Jessica Rayner’s work is iridescent, suggestive of fresh light: a sense of possibility. Her 365 Faces of the Sun, shares with us an insight in to the multiplicitous colours of the sun. According to 19th century scientist Charles Sanders Pierce, a mental idea can be compared to a ‘composite photograph’ – the colour yellow, ‘a composition of all the yellows I have seen’. Similarly, Raynor’s multicoloured sun shifts. Despite the black and white threats facing humanity, our future is not fixed.

‘Rayner’s work is about renewal and regeneration. She’s also looking at materials that enable innovation. Ingenuity. Her Biofuels drawing, The Wood Pile, is painstaking in detail – it’s a work that inspires us to pay attention.’ Sekules continues.

In a time of oppositional politics, where families, communities, countries, sectors, even, are increasingly polarised – older generations against younger, left and against right, art against science: it’s easy to stop paying attention to detail. To choose one side, and shut down against the possibility of all the shades in between. You see this everywhere – on social media, as algorithms choose which perspectives to expose us to, which bubble, to keep us within. But can art really help in a time when we’re seeing a narrowing of the lens, everywhere else? How can it explore environmental issues?

‘Artists are very well placed to both explore this question and to act as a bridge between the scientific and engineering solution oriented approach to climate change and the broader public grasp of its implications, says artist Simon Read, who’s been examining climate change induced coastal sea change, in his own practice.

The East Coast is seen by many leading cultural influences in the region, as offering a strong, emerging arts scene. Art and technology programme in_collusion, drew thousands to its large scale light projections in Kings Lynn in 2017. Great Yarmouth is home to acclaimed circus and street arts organisation, Sea Change Arts. Metal, on South-End-on-Sea, is renowned.

Since opening in June 2016, GroundWork Gallery has been nominated for a clutch of awards, winning the Nick Reeves Environmental Award, for ‘outstanding’ contribution to environmental arts. It’s offering as a space for the UK, plus broader international community, to explore some of the most heavyweight issues of our time, is rich.

‘Given the location of Kings Lynn, its elevation in relation to sea level, proximity to the Wash, vulnerability to storm events and tidal surge, it is very much on the front line of climate driven influences. The immediate presence of the estuary and a dynamic tidal environment is a fitting location to reflect upon the extreme vulnerability of an ancient human settlement,’ continues Read, who appeared at a panel discussion at GroundWork Gallery in November, chaired by leading environmentalist, former Executive Director of Friends of the Earth, Tom Burke.

According to scientists, huge swathes of the UK, including Kings Lynn could be under water due to rising sea levels caused by climate change. The need for reflection, debate and action, is critical.

Sekules established GroundWork Gallery in Kings Lynn, partly because of the need for action. The need to encourage cross-collaboration and debate across sectors. But also, a long running love for the city. ‘I’ve always liked the town and wanted to do something’, she says. Lynn itself is enjoying a resurgence of growth and has long had a loyal arts community, yet its potential as a location for thriving contemporary arts can be overlooked.

‘Kings Lynn is tainted with this opinion that it doesn’t have a great deal going on here. It’s great seeking out new places like this. Taking the children I teach somewhere like this would be fantastic,’ comments Lorna Karman, an artist and educator from Norwich, visiting the gallery with her mother.

Hilary Mayo’s work upstairs at GroundWork, as part of Fire & Ice, offers an even response. Her hand built ceramics reflect Iceland’s changing and fragile environment, with an impressionistic response to place and experience. Clay becomes canvas, each piece layered – so that it’s unique.

This inclusion of crafts in the gallery, as contemporary art, is deliberate. An invitation for us to remember the deliberation of making. For Sekules, its accessibility is key.

‘I like mixing media and including what people would call crafts and makers. There can be the perception that crafts can’t be engaged with ideas, but they do. It’s part of my Sainsbury’s background that most of the world’s art can be sat on, eaten, etc.’

The inclusion of makers is also a timely reminder that we make our own futures, making Fire & Ice a show that’s uncompromising in its warning, yet grounded in hope.

Tuesday – Saturday 11-4 during exhibition dates. Other times by appointment.