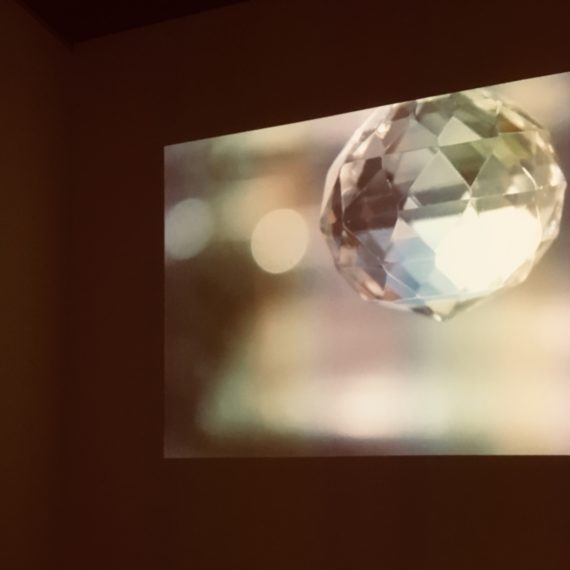 Looking at art makes me feel bored, sad, tired, lonely and mean. Degree Shows are the worst kind of exhibition. All that fresh art. It’s like trying to have a conversation in a club.

The GSA 2018 MFA Degree Show at the Glue Factory attempts to address this problem by employing a number of lures and tricks. This lot of graduates endear themselves to you. You first start to believe that they are a charming bunch when you learn that they have tailored clothing for one another by hand. One of them serenades you in the bathroom. Sweetly, hiccupping occasionally. The singer is possibly drunk, a little dozy, sounds like she may be in a karaoke bar on a Monday night. The lights have been turned on but the bar staff can’t bring themselves to tell her to go home. I have never been serenaded while on the loo and (critically speaking) I can highly recommend it.[1]

According to its label, Maria Gondek’s In Unison “Sings three times daily”. This extremely clever appliance is made of copper piping, steel channel, boilers and steam. Who knows what’s going on there? The best that I can do for you is to describe what I saw: suspended from the ceiling, delicate and immaculately welded turns and shoots of copper piping, piping. Out of the piping pipes, steam. And water, dripping onto the floor where a trail leads to a signature Glue Factory gutter. The sound produced is eerie and haunting. Twilight and someone is about to be swallowed by the Scotch Mist. Science. Silence, until it pipes once more.

My understanding of the MFA is of a two-year programme where essentially you are locked in a room with some other oddballs, observed, prodded and poked until you start to self-reflect or at the very least, critically re-evaluate something, anything. As the Degree Show exposes the culminating point of this process, visitors would do well to find a comfortable chair wherever they can get it.

Fortunately, this exhibition provides a range of seating accommodation. Manipulative, sure, but also generous to anyone who might have taken a wrong turn off the motorway and ended up at the Glue Factory.

Nien-Ting Chen not only provides the degree show soldier with sofas and tables but has also set up a Temporary Snack Bar with ambient lighting. Food and drinks are served up daily by the artist herself. Chen has worked with the East Asian community in the area to explore local/global relations of exchange through hospitality.

Mathew Parkin offers you a plywood bench, which he describes as a “comfort object”. Its design references the work of Italian modernist-communist, arts and crafts aficionado of the DIY-construction-of-furniture, Enzo Mari. Sit on it and you are drawn into familial recollections that emerge from a house clearing after the death of a matriarch. The video, titled Vaseline, touches on language, queerness and class. It feels familiar, sensual, hostile. Grab some snacks from the Temporary Snack Bar, this one is 44 minutes long. It is also one of the most engaging pieces on the show.

Both Sandy Harris and Sooa Lee offer comfortable floor-bag seating. Harris’s giant colour-coordinated corduroy lounge pillows, indoor plants, folding chairs, framed small paintings and S.A.D lamps are domestic accessories, the sum of which jars with the dark, damp interior of the Glue Factory. These elements suggest that you imagine yourself as a “…loose lily floating down an amber river,” [2] but the reality is bleak and the floor is filthy.

Sooa Lee’s My Room is dark, but cosy, with a carpet and blanket as well as beanbags, all in grayscale. A Snowy day #1 and 2 show a blurred view of just that through what looks like a double-glazed window. Being as you are, inside My Room, with the option of swaddling yourself in blankets, you feel almost cosy but mostly sad.

David Fagan is humiliating himself on television in the room opposite these gloomy environs. One television shows footage of an MTV presenter actively sabotaging his career on a live broadcast. Almost perpendicular to this, Fagan dad-dances himself to exhaustion in his empty studio dressed like an office temp.

Courageously, Dan Newton’s work asks questions about the stuffed animal doorstops that so many of us invite into our homes without thinking twice about what they might be seeing or recording, how they might be using this data.

You become familiar this group through the exhibition both physically and personally. This messes with your critical distance as a viewer – cunning. Visitors are welcomed into numerous domestic and private spaces. Zoe Beaudry, Elina Bry, David Fagan, Christian Noelle Charles and Jeanne Tullen are the models, subjects or characters at the centre of their work. Christian Noelle Charles (CC) celebrates self-love on screens throughout the building. Zoe Beaudry features hyper-real projections of her pregnant self in aura-paintings, and you may not have realised, but you are stalking Jeanne Tullen. More on that later.

Should you wish to get some air at this point, pull the chord in Negin Saaed’s installation and you’re in an aquarium on a mountain.

Jaxton Su’s sculptural works, which are dotted around the show, include a kind of iceberg aquarium. The pieces are quiet and melancholic little worlds that make the lighting feel harsh.

Cara Lasell Bonewitz has tracked the practices of female seaweed enthusiasts from the 19th century in Scotland. She has developed her own irregular anthology through foraging excursions along the Scottish coastline. The wheat-pasted aesthetic of her walking flowers is effective in the rough, industrial setting of the exhibition.

Sarah Louise Keber’s presentation is a study in prolific painting. It spins a sentence about process and form that doesn’t need to be written down. The work is energetic and legible.

Supapong Laodheerasiri’s paintings are self-conscious one-liners, drawing directly on a history of conceptual one-liner paintings. I won’t spoil the fun by writing them down here either.

Many of the artists feature in one another’s pieces or collaborate more actively. This peer group has made use of each other’s skills and quirks with flexibility. The result is a series of uncontrived overlaps, unusual and spontaneous collaborations.

Now here’s a word for you: Aesthletics.

Megan Clark has designed and fabricated garments that combine trends in Glaswegian dress from the early 19th century with the prevalence of sportswear in more contemporary fashions. Clark’s pieces have been fitted specifically to several members of the MFA cohort, taking into consideration their individual characters and practices. The outfits are worn by the artists, and synchronised with distinct performances scheduled to take place during the course of the exhibition.

Giulia Lazzaro wears one of these ensembles as she and Clark test her bicyclette on the Côte d’Azur once a day for 4 minutes. The bicyclette needs to be seen in the flesh. Lazzaro has painstakingly fabricated this vehicle with the help of a variety of technicians. She acknowledges her support team with large colourful logo stickers on the wall. The title of the piece, Let’s All Make The Bicyclette // Let’s All Break The Bicyclette reinforces the collaborative effort involved and carries the weight of her undertaking by embedding its potential for failure. There are niche, failure-related design references all over this project that I’m too limited to recall so among other things, it’s cool.

Corinna D’Shoto takes the baton by designing the set for a performance choreographed by Elina Bry and featuring a number of the Aesthletics team. Her set includes sharp steel window-like arches backed by gridded fence fastened to sky-blue fade-in transparency. Cable ties shine in this role. The shadow cast by the structures is astro-turf. The installation is a relic from the gothic future, with traces of adidas.

The use of discrete historical references to build futuristic narratives is a thread running fairly consistently through the show. Arguably, Jamie Cooper delves deepest into the abyss of the historical future with his immersive light, sound and sculptural installation. He has tapped into Junk DNA, the language of his no-time and generously offers a tutorial (with matching seating) in sounding out its terms and shapes. It’s funny – I think.

If you aren’t swallowed whole by Cooper’s piece, you could come out the other side to contemplate some equally cryptic subjects with Cameron Orr, where the lights are on.

Just outside Orr’s installation get yourself a map for James Oberhelm’s THEATRE which is accompanied by a temporary display at the School of Physics & Astronomy at the University of Glasgow.

Wojtek Gasiorowski’s installation in a darkened room upstairs offers no seating but surround sound and lots of other things that come at you at once. There’s so much nervous energy in this room that you may feel inclined to bounce around it anyway. Rumours concerning his early career as a ping-pong champion are as yet unconfirmed. Gasiorowski, who is also a highly accomplished musician, has built a large wind instrument based on a large wind instrument. The serpent – as this instrument is uncommonly known, is awkward and proud. Its installation is of the tidy bricolage variety – as if you went to a very particular kind of garage sale, picked up some really cool shit, cleaned it thoroughly. The video, on a casually slanted screen at the base of the instrument, shows a kind of warped tutorial.

Comfortable seating is conspicuous by its absence in the upstairs galleries. There are two options (excluding Lazzaro’s woven bicyclette seat[3]) and in each case, should you choose to sit down, it is a choice to become involved with the work. Nastia Nikolskaya’s dressing rooms can be sat in. The wooden frames are draped loosely and generously in white tarpaulin. The material folds around the structures like tablecloths with too much starch in them. If you walk inside the middle one, you can sit down and look at yourself in the full-length mirror. When you’ve finished doing that, if you angle your head correctly, you can just see the pregnant figure of Zoe Beaudry in the gallery behind you.

Jeanne Tullen provides clinical pink seating in her installation, though the sense is that these chairs are for her personal use. She has created a laboratory of her digital selves in which we track her movements (live). She invites one version of herself onto your desktop where she stands and fidgets in a one-piece suit the colour of her flesh. The installation is immersive, the detail fine and considered. I am left feeling both convinced and vacant.

This piece of writing is more of an erratic index than a review and while I have managed to mention all of the artists, I have covered many but by not all of the seating options. Suffice to say that there are enough of them to provide you with the variety of repose you will require to get through it.

Making art is hard. Looking at art is even harder. The GSA 2018 MFA Degree Show 2018 offers moments of respite in a saturated landscape.

[2] This and the installation’s title When you rest you are a king surveying your estate are quotes from The Little Book of Calm which is accidentally swallowed by Manny Bianco (Bill Bailey) in Dylan Moran’s dark comedy series, Black Books (2000-2004).

[3] To touch briefly on Lazzaro’s abundance of design references, this saddle recreates a design by Mikael Pedersen, a Danish inventor who was based in Dursley, England c. 1893. He also developed a mechanism for separating cream that drastically changed the dairy industry. He died in relative obscurity in 1929.

Chloë Reid is a writer, artist and curator based in Glasgow.