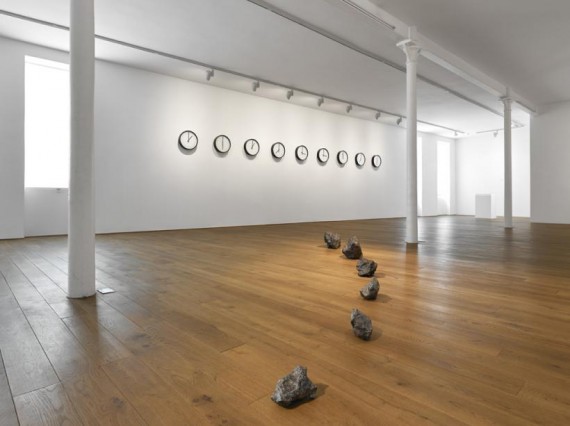 Katie Paterson is a time traveller. The artist’s largest solo show to date gathers a constellation of 12 works, juxtaposing times as disparate but connected as the glacial and the geological, historical and cyclical, human and celestial.

Fossil Necklace (2014), recent winner of the South Bank Award, is given room to breathe. Spanning aeons in millimetres, each bead on the necklace recounts the history of the Earth through 170 carved fossils. Though rooted in evolutionary thought, the eternal return of the loop pays homage to cyclical time; while the tiny planets of spherical fossils reference older number-counters, tangible even today in abaci and prayer beads.

In fact, ancient methods of time-measurement – the water clock, hourglass, sundial, lunar calendar – are obliquely referenced throughout. Vatnajokull (the sound of) (2007-8) records the sound of glacier melt in Iceland; The Dying Star Letters (2012-2014) announce the deaths of distant suns; Second Moon (2013-14) sees a lunar meteorite orbit the earth via air freight, comically colliding with border bureaucracy.

It’s a typical theme in Paterson’s work: improbable scenarios that collapse natural phenomena and human experience. A new series, Ideas (2014-ongoing), proposes projects yet to be realised: “An ice-rink of frozen water from every glacier” and “A beach made with sand from hourglasses” are two. The short phrases in waterjet-cut silver scatter around the exhibition, appearing and disappearing in the light.

Ideas is one of few works that function well without an accompanying text, highlighting the primacy of concept in Paterson’s practice. There is nothing spectacular about the aesthetics deployed: the show is largely monochrome and ordered, modernist and archival in its presentation. Paterson’s work does not manifest as institutional challenge, which makes the moments of quiet rebellion more marked.

Inside this desert lies the tiniest grain of sand (2010) is a performative act documented in regulation silver-gelatin print. A blurred figure buries a grain of sand in the Sahara. Not any grain – this one was minutely carved using nanotechnologies to be 0.00005mm. Following a collaborative process in which artist and scientists were undoubtedly invested, the ultimate return of sand to the desert could indicate a fruitless activity.

Similarly, History of Darkness (2010-ongoing), a photographic record of the darkest areas in the universe, grants viewers the pleasure of handling some of the 2200 slides, along with the frustration of discerning nothing but darkness. Photography – and indeed eyesight – requires light: to see darkness is to peer into the abyss. The dark slides, the figure dancing in the desert: these are depictions of the edges of our comprehension. Celebrated for her scientific collaborations, Paterson willfully – and, I suspect, joyfully – acknowledges the limits of human knowledge.

And there is something vaguely revolutionary about the non-productive gesture – what Agamben might call “means without end”. Our present condition of neoliberalism compels arts funding bodies to communicate, over and over, the economic value of culture. Paterson reminds us that art – or indeed speculative science – provides a rare space in which productivity is not the primary pursuit.

Against this cultural landscape, the artist’s newest, most ambitious and wayward project Future Library (2014-2114) might be best understood. It exists, for now, as a beautiful embossed certificate and a newly-planted forest in Norway. In 100 years the trees will be harvested to produce 100 books by 100 writers. It’s likely that the artist, along with many of the writers will not live to see the books published, or ever meet their readers. To imagine outside of one’s lifetime, to invest in that unknown and to propose that others do the same, is a courageous act. Future Library is a profound countercultural experiment. It projects us forward to a time that cannot be measured: it risks failure, but carries with it hope and something akin to faith.

On Gerhard Richter, poet Robert Haas wrote of the painter’s ability to “[…] render time and stand outside / The horizontal rush of it, for a moment”. Likewise, Paterson conjures moments for contemplation of and outside time, but instead of paint, she uses deep space, ancient rocks and newborn forests as her materials. Through Paterson’s lens, we glimpse time askew and the world anew.