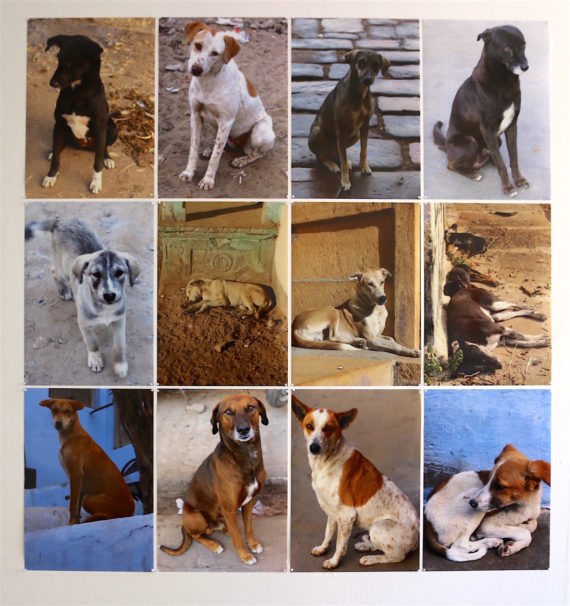 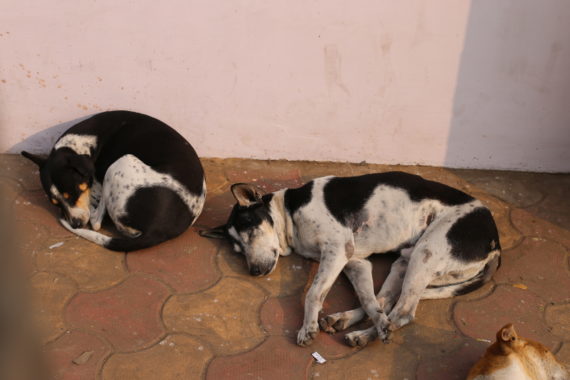 Arriving in Kolkata from the breezy sea air of Odisha, I find the night streets paved in cars, awash with a never ending flows of people. Against a gaudiness of light, colours, and movement you catch the fleeting shifts of shadow dogs. Kolkata’s street dogs interweave between the endless movement with effortless ease. It makes the taxi ride and the taxi seem like the worst possible form of transport in a congested, excitable city. It’s as if they are telling us to get on your fore-paws and start lolling across the uneven streetscape with a graceful ease. They tell us with their prone, expressive ears to take it easy then, under the polluted pall, and walk the city, at a pace that suits you; to balance vision with scent, touch with smell as you pad through the cacophonous streets. 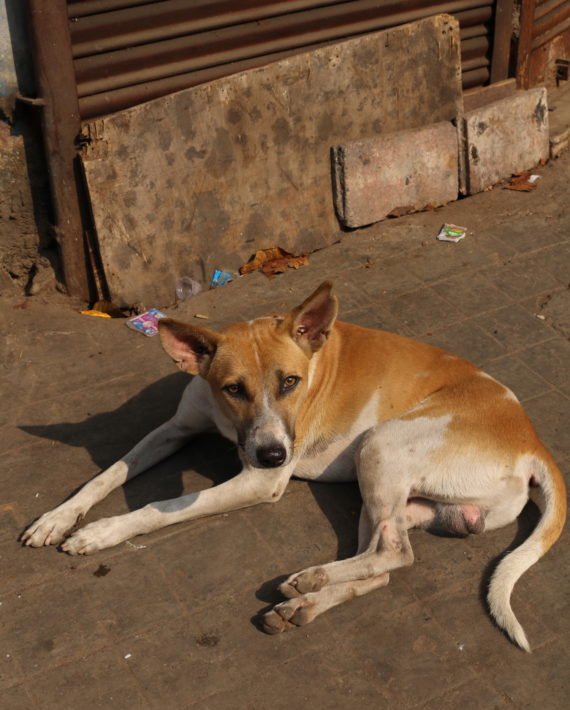 Now after collecting 90+ Puri Dogs, 95 Beach dogs, 58 Odisha Village Dogs, I land in downtown Kolkata to glean some real city dogs. Kolkata Folk, sleeping on the roadside with their human brethren, these streets dogs are more laid back and yet more wary than any out of town dog. Sharing the streets with a constant flow of strangers and with a population of street people, is more intense, more demanding but with certain opportune recompenses. And those ears, pricking, flexed, muscled, limp, constantly twitching with anticipation and individual micro expression. Each Dog with their own way of cocking their head and saying hello. 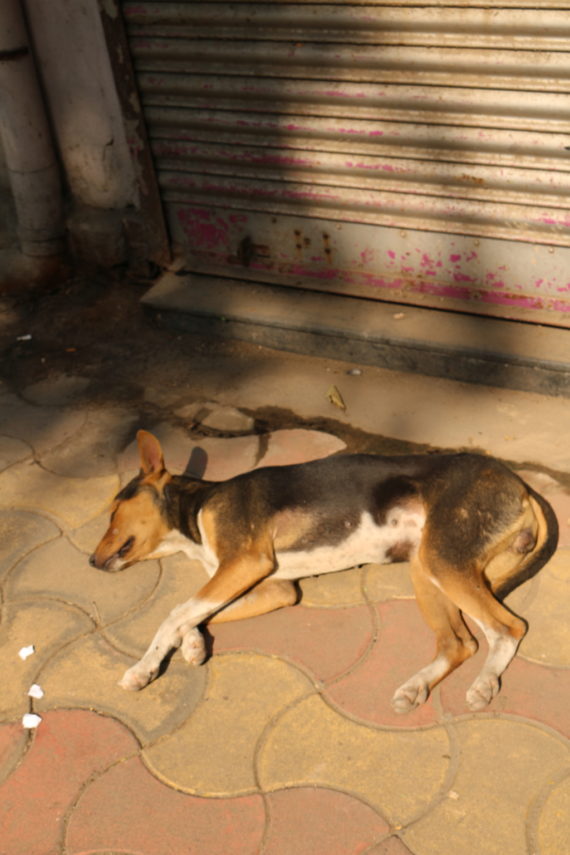 As luck would have it I wake up to a bright Sunday morning and find the streets unusually calm. Kolkata is a city to walk in, I think naively, but wait until Monday, when the city reemerges. Different then? Yet within its eclectic mix of architecture, its scale and constant movement, there remains a sense of inner calm, in a leisurely hubhub. In three days of walking and haunting the streets both night and day I will add at least another 50 Dogs to the ‘collection’, while plotting a course for an Indian Metropoitan Trail. 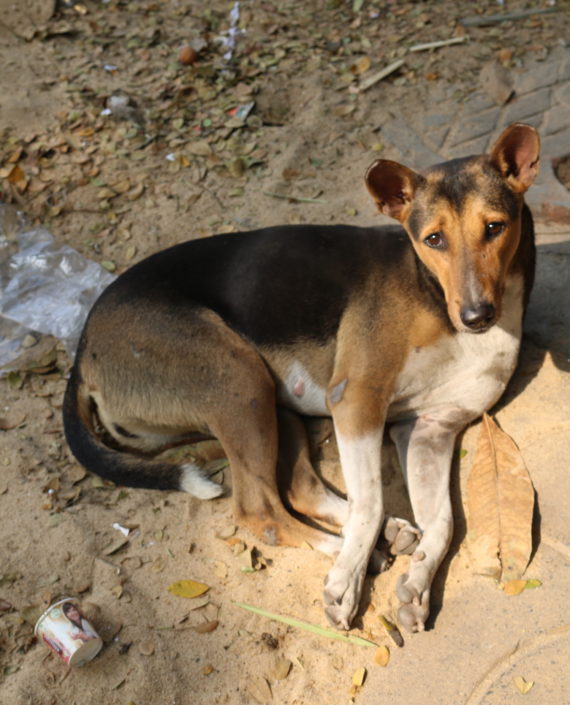 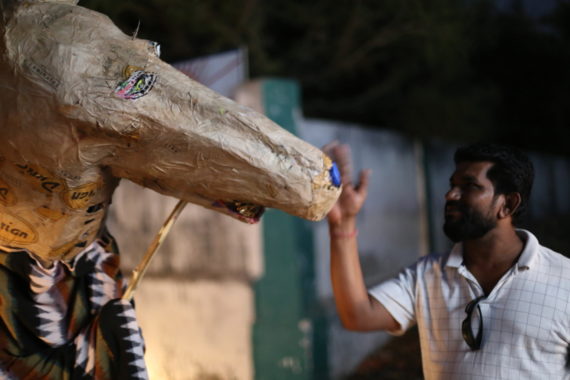 In the late afternoon I make final preparations for mask performance around the street and beach site.  After four days of intensive making  the King of the Dogs is finally making an appearance – dancing into Puri – a familiar but alien presence, and for a few hours the town is subjected to another spirit; doglike and dogheaded, roaming myopically through the byways of this sacred city. 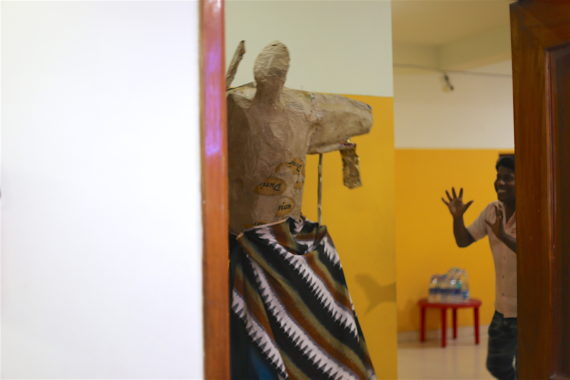 As with other intuitive performances created in public space the masked figure operates in another zone, just in front of what is prescribed and allowed. So the King of the Dogs runs before the law just before the door is firmly shut on his twitching nose. Sniffing a way into spaces and places just out of reach or out of bounds, encounters with the human are completely unpredictable. And yet like a true street dog slipping into and through barriers, speaking across species and seeking out opportunities for companionship or nourishment, The King of the Dogs plays host to a stream of continuous speculative exchange. All the while accompanied by the extraordinary dancing musicianship of Matt Scott’s accordion playing.

Finally the Puri King of the Dogs is laid on the sea edge and burnt.

Images from the Performance (Photos and Film: Diana Gurdulu and Tilla Crowne)

First some rehearsal (with Rishikesh Deshmane, Seidhar Nayak and Basan):

Then the performance (With improvised Accordion – Matt Scott):

Then the aftermath (On Puri Beach): 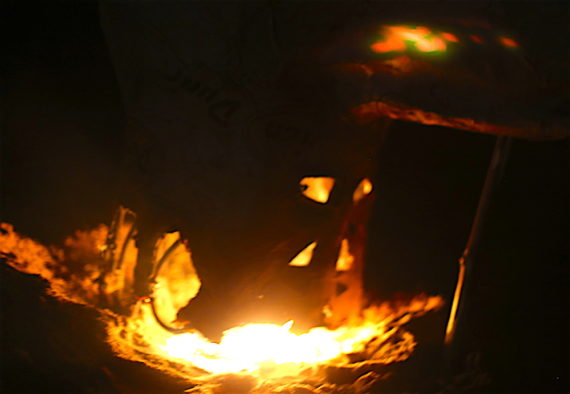