I have only stepped foot on North East soil once in my life when I visited Newcastle many years ago. With the uprising of various arts organisations and studios I was keen to re-visit with my artist head on. Recently I received an Arts Council England Grants for the Arts funding award for the research and development of new work. As part of my proposal I wanted to venture into different regions introducing my practice and meeting the facilitators responsible for making it possible to live in the North as an artist.

As an avid reader of Corridor 8, I noticed an article in 2012′s Part 2 edition written about artist-led spaces. This included interviews with The NewBridge Project and Platform-A Gallery, both seemed impressive and spurred me to organise a visit; I was not to be disappointed.

First stop was Platform-A Gallery in Middlesbrough. I had been lucky enough to meet director Tony Charles at The International 3 Share Market Share event at Cornerhouse, Manchester a few weeks before and was very interested to talk for longer, see his own work in the flesh (Tony works as an artist based at Platform Arts Studios) and see the gallery for myself; news along the grapevine was that it was a stunning space and hard to not fantasise about showing in.

Sometimes I find a galleries output (through social media, online) far more impressive that the actual space in question. When you rock up at the gallery it can be disappointing compared to what your perceptions were. This was not the case with Platform-A Gallery. When pulling up to Middlesbrough Station (where the gallery is based) I was immediately impressed with the outside, it had curb appeal; clean, big windows, adjoining studios, lots of clear letting telling me what was on.

On ringing the doorbell I was greeted with an enthusiastic curator; Tony Charles. I was handed a gallery guide on thick card; no expense spared, with the intent (I am sure) of creating a good impression, high-output and sure sign of quality. I was there to see fellow Rogue artist Lee Machell‘s solo exhibition Interruption, a pared down approach to making work and a brave curatorial display. The minimal hang let each work sing, given the space for the visitor to question.

After a tour of the studios and workshops attached to the gallery I can say 100% that anyone would be happy to live as an artist in Middlesbrough. With a studio in this facility and this gallery on your doorstep showing such exciting work, not to mention MIMA just around the corner, Middlesbrough is becoming a contender in the North East art scene. If only there were more Tony Charles’ to set up such wonderful spaces, bravo!

Next stop was The NewBridge Project in the centre of Newcastle. Upon entering the gallery space, my first impressions were how sharp and well installed the current exhibition A Small Hiccup was. It was great to see co-director Will Strong sat at a front desk, available to give information and offer an insight. I am finding it rare to find visible directors of arts organisation, they tend to want to hide away in back rooms – I understand why this is, but think it is still vital to have a gallery presence.

I was there to see the space. I was treated to a tour of the adjoining artist studios and was allowed time to ask Will about the set-up. The calibre and amount of artists they house is extraordinary. This is another highly desirable arts facility in the North East. I know from experience that is takes genuine passion, time and self-made poverty to create an organisation like this. It’s not easy. Rigorous ideas and planning for such a space is integral to the organisations success and it seems this bunch have is sussed. Will was telling me of future plans for an onsite artists’ bookshop, new office and hub. They are expanding thanks to the support (I presume) of the local landlords. The NewBridge Project have a tidy gallery space, masses of room for studios, soon-to-be bookshop and social space. 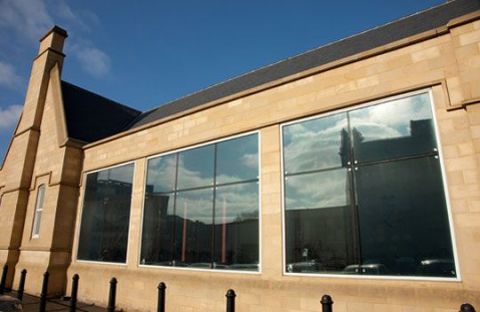