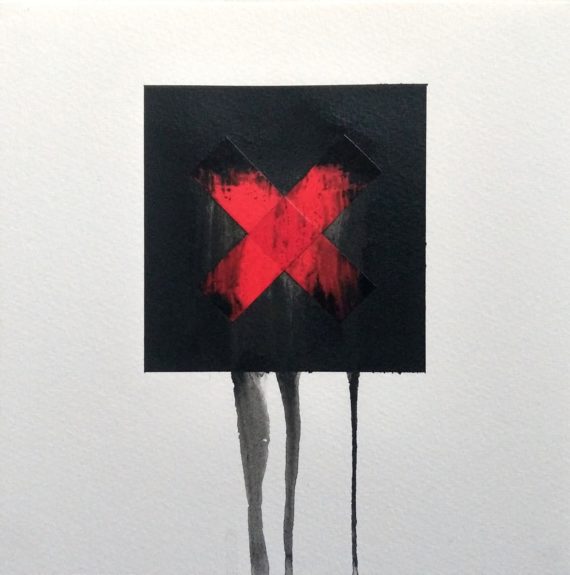 It is said that it takes 66 days to establish a habit. Well, I am now well passed that point with the #BlackSquares365 project so I guess it has become habitual for me – a good habit I hope. It is certainly a habit that is bringing me some very pleasing and encouraging results.

First, I am continuing to sell pieces on a regular basis. Perhaps not quite as quickly as I had hoped, but I have some plans to boost opportunities as well as promoting it more widely to my network.

Secondly, it is proving a fertile ground to try things out and, as always when you are up against rules and deadlines, it forces you to trust your instincts and make good artistic decisions. I’m now in that zone, perhaps like a jazz musician improvising, where I hardly give it a thought but merely set it running and it happens.

Thirdly, I hoped it would keep my social media presence ticking over whilst I got on with some other things and it is here that I have been astonished and delighted with the results. On Twitter, which many people agree had become less dynamic and less “social” in the preceeding year or two, I found an immediate reinvigoration. The first month saw the largest growth in followers for a long time and levels of traffic and engagement that I had never had before even in Twitter’s heyday! The growth in followers has steadied up since but level of interactions and engagement continue to climb. On Instagram #BlackSquares365 has made a remarkable difference to my account. My Instagram followers have grown by almost 1000 in just 75 days and the number of new personal interactions and commenting has dramatically increased. Before I started the project I was pleased if I got 100 likes and delighted if I hit 200. In the first few days of #BlackSquares365 it was much the same as before. Then in the second half of the  week it started to grow. By day 9 I had my first 300 likes. Week three saw the average number of likes get above 200. Not every day was equally well received but time of posting has quite an effect I am finding. Then on day 37 the likes just kept coming. I couldn’t believe how quickly they clocked up . It is still my highest-liked piece at 1589 as I write this. Since then I have had other posts with over 1000 posts and am no longer surprised when something reaps over 500 likes.

These number may seem trivially small compared to some people’s success on social media but it’s been a great result for me when all I hoped for was to maintain my presence. This, in turn, has led to enlarging my network and getting some new first contacts with gallerists and curators. So I strongly recommend making new good habits!