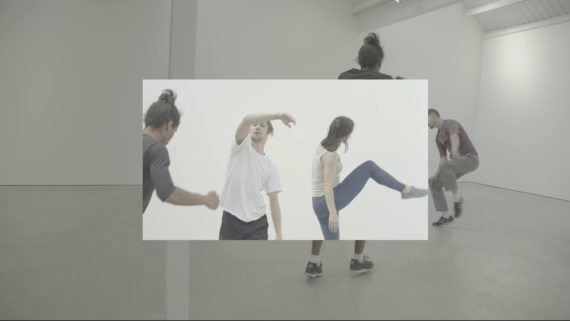 We began with a series of somatic exercises, paying attention to our breathing. In pairs, we felt the breathing of the other by laying hands on the body.

We envisioned a white mist, and allowed this to guide movement.

Lifting the shoulder of your partner.

Your partner giving their arm to you, allowing you to guide and lift.

Revisiting ideas of moving in unison and in mirror, but adding ideas of contrast and compliment.

In groups, following a simple score. Moving from one side of the room to the other at the same pace, whilst remaining in our contrasting and complimentary pairs.

Developing these ideas in small groups, ending with a group score created for one pair. Parameters such as ‘focus more on the fingers’, ‘remain close together’, ‘move from the floor to standing’ and ‘use the benches’ were introduced.

Joe introduced the idea of feedback models and working with performers. Based on the feedback model of Liz Lerman, we used ‘I notice’ and ‘I appreciate’ to feed back and draw out new possibilities from the performers. Using ‘What if…?’ to suggest new ideas for the next iteration.