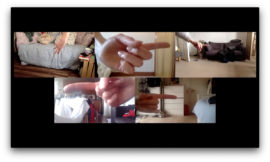 ‘Reading the Room’ is a movement-research workshop running from February – June 2021 and forms part of my 2020 a-n Development Bursary activity.

WEEK 5 Recap We began with self-directed warm up and improvisation and a short reflection on the accumulation of skills and ideas over the previous sessions. A brief exercise was introduced, with us in groups of three assuming the roles […]

Joshua Leon If I was to say i knew the outcome of anything in the process i would be wrong. But that is what becomes so meaningful. Uncertainty and the figuring out of uncertainty is explanatory. As each week goes […]

Each week the blog will act as a resource for any notes or references mentioned during the workshop, as well as featuring at least one visual or written response from one or more of the participants.   WEEK 3 Recap […]

Each week the blog will act as a resource for any notes or references mentioned during the workshop, as well as featuring at least one visual or written response from one or more of the participants.   WEEK 2 Recap […]

Piasecka explores ‘Under the Skin’ in relation to her choreographic practice: ‘More so than men… women are body […]’ (Qtd in Susan Bordo, The Unbearable Weight: Feminism, Western Culture, and the Body. Berkeley University of California Press, 2003: 256-257). We […]

We started this workshop by looking at Tea Break I (v.4) and Tea Break II (v.3) and thinking about any editing needed. We had exhibited a previous version of Tea Break I on a framed mini iPad which displays the […]