Before I started hanging any work on the wall I had to decide a) what I was going to put up and b) how it was going to all be situated on the wall. I didn’t want to start randomly banging nails in the wall only to ahve to pull them out and have to fill the holes in etc. It would just make more work for myself in the long run. to a certain extent this ended up happening any way, so if I was to do this again I would spend a lot more time thinking about the layout of the work but I think with this kind of thing the onyl way to know how the work is going to look is to put it up on the wall. It’s okay to get a rough idea by laying it out on the floor but when you put the work on the wall it feels totally different; it is at a different height, itsbeing seen at a different level. 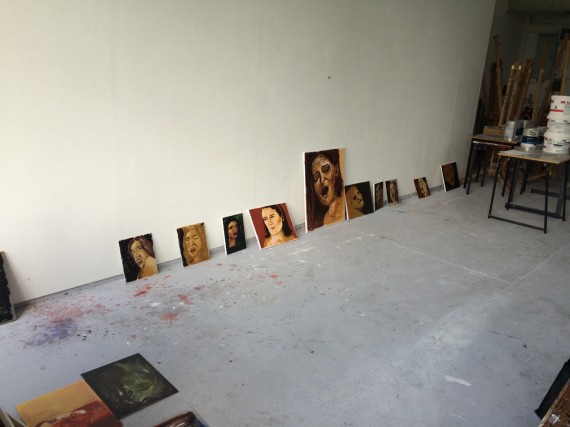 I knew roughly what work I wanted to put up and what I didnt. I have quite a lot of work to choose from that I have done over the year. this was the hardest part choosing what I felt were my strongest pieces and what were quite weak. In the end I divided them into two piles and had to be quite cut throat about it. I ended up with around 15 pieces that I liked and I then widdled this down to 11. 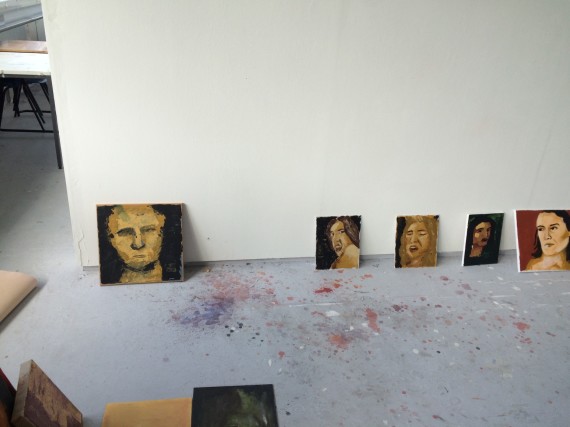 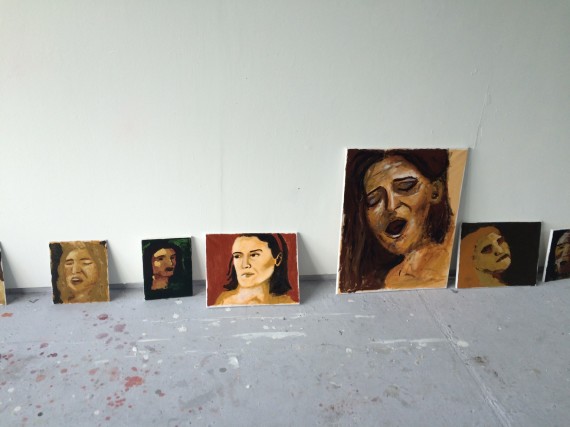 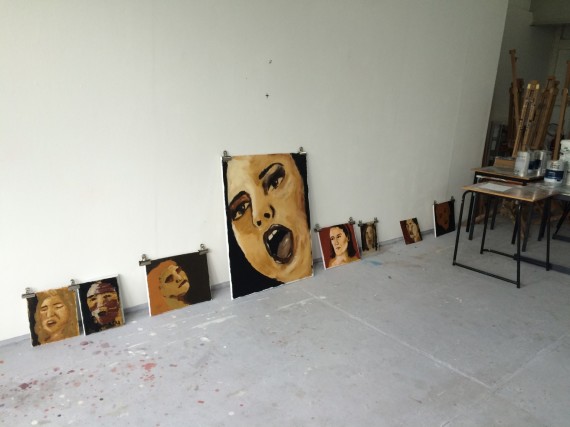 What isn’t documented in the photos is the fact that I considered all of the large paintings at first. Because it is a really big space and I had very few large paintings I thought it would be a smart idea to fill the space with my large works. However when I lined these up agaisnt the wall they just didnt look right. Yes, they looked uniform and they were all the same size and were neat but together in this space it just didn’t look like a reflection of my work. So I took them all away and decided to choose one large scale piece to put in the centre. I thought back to my 2nd year assessment, where I had a large piece in the centre and small piece either side. This really worked and they complimented each other. I thought this would work here. So I started to pick the pieces of work. I had one piece in the centre (which I later swapped out for a slightly bigger piece) and I had slightly smaller pieces either side, three a4 sized pieces either side of this and then something slightly bigger at the end to tie it all in. I didn’t want to go big to small from the centre because I felt that this dragged,I wanted it to be uniform and for there ot be a flow to the works. By having it flow up down, up down it works. However due to the length of the wall the work really dragged along. Rather than the viewers eyes bouncing from each piece of work to the next, the viewers eye dragged along looking at each piece. this didn’t work for me. Again I thoguht back to my 2nd year assessment where I had a triptic involved in it. The three a4 sized pieces either side of the centre piece were calling out for this. They all worked well together and they complimented each other; not long in size but in technique and style. So I decided to see what these looked like as triptics either side. I really liked the end result. I often find I am doing this in my practice; making individual paintings and then later on deciding that different works work well together and producing a series. This accidental series’ actually end up being som eof my most successful pieces. 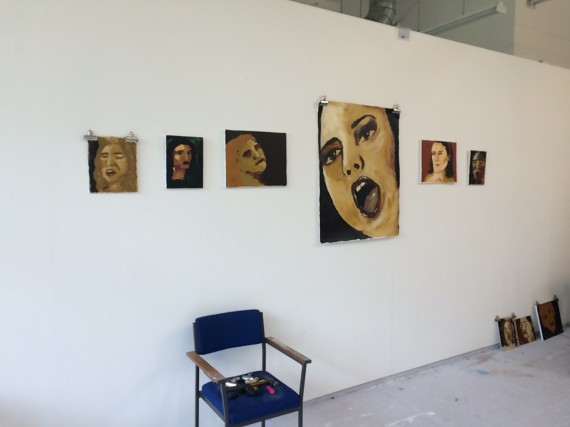 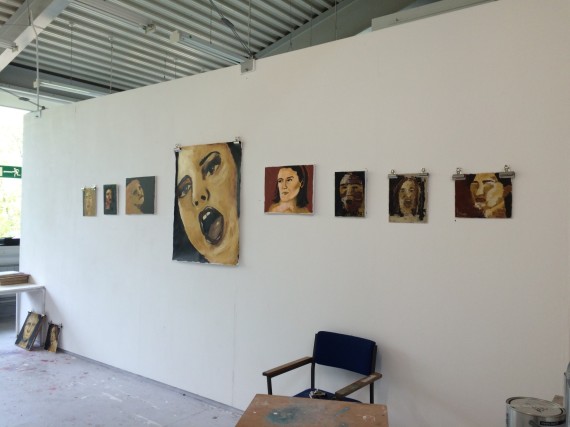 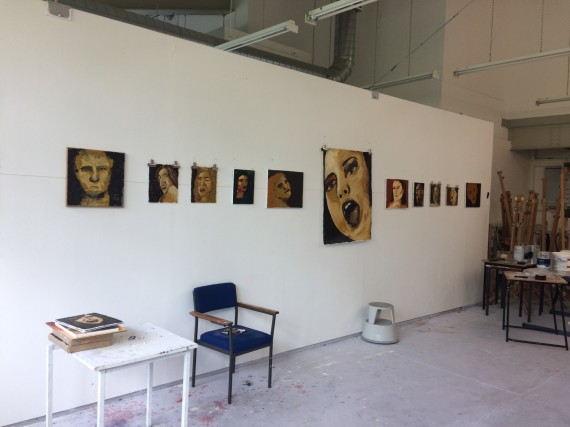 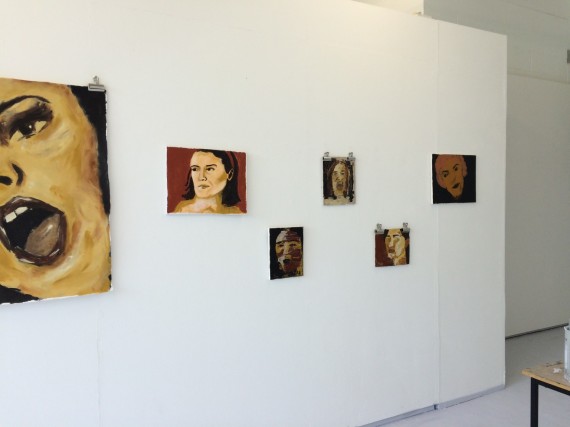 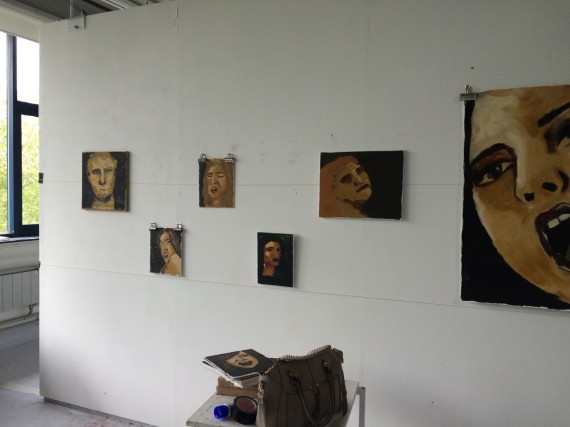 I didn’t change the space between each works, just simple moved them down a notch. I made it so the bottom two of the triptic lined up with the bottom of the centre painting. I did this for uniformity and so that everything worked harmoniously together. I didn’t want the set of paintings to look out fo place form the rest. The paintings all work well together but by breaking it up like this it added an element of interest and lets the viewer bounce from one painting to the next. Upon reflection, I think that maybe I should have made the space betwene individual works and the set of works slightly different but I didn’t want it to disrupt the flow of the other paintings and I think separating it a little more would’ve done this and would’ve had a negative effect on the work.

My work is very informal, earthy, and raw. It isn’t fancy and doesn’t require anything fancy to hang it either. I don’t need any elaborate set ups or any elaborate layouts for my work. I wanted it to be as simple as possible so that the work could speak for itself. There is something quite understated about simply hanging a painting on a white wall these days. I feel like modern artists are so pressured to push the boundaries and explore different concepts that they lose sight of the simple things. I want to get back in touch with the simpleness and the practicality of a painting. I have always wanted my paintings to speak for themselves and for the viewer to not be distracted by anything, hence my layout.

I am very pleased with the choice of my paintings. I ahve said before that I wanted my degree show to reflect my practice and to reflect me as an artist. It’s no good having a show of amazing work that says nothing about the artist or their practice. I think this selection of work represents how I explore different techniques within painting; often dithering between a paintbrush and palette knife. It also highlights this love affair I ahve struck up with certain colours. There is a theme with the earthy yellows, reds, browns, blacks, greens that I use. It also shows how I like to experiment and explore size and scale. I ahve never been one to stick to a certain size for my works; “everything must be this big” etc etc. That’s not been me. Very often I will just find a piece of wood/MDF/paper and think, “oh that’ll make a nice painting” and use that. I think this selection of work represents how I spent my last year at university and it also represents where I see my practice going. I feel like this is successful in terms of exhibiting a selection of works that are cohesive and represent me.