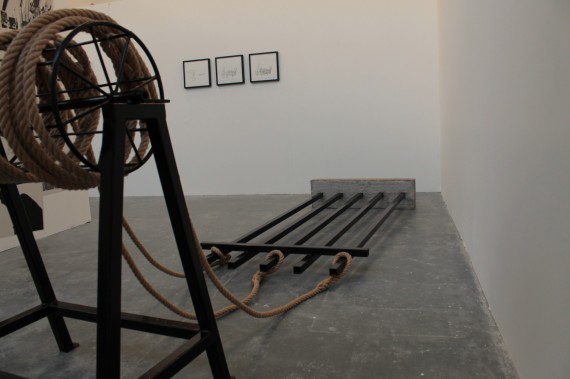 Invigilating your own degree show is actually quite terrifying. After months of running about the art college in preparation for degree show and installing, sitting down for a long period time gives you the time to realise that this is just the beginning.

Talking to the public about my work and receiving feedback made me proud of what I had created and the time I spent looking at my work helped me to reflect and prepare myself to move forward. And most importantly, realise the amazing facilities that allowed me to create exactly what I wanted.

Over the next year I want to focus more on how a place can reflect its people, the industrial aspect of my sculpture is something that I want to continue as a symbol for the death of factories and the jobs that go alongside it. The need for consumerism divides society as the rich take over and the poor are left on the outskirts, unable to progress. Wherever you go in the world, this can be seen.

The layers in print is something that I find truly fascinating, how something can overshadow or cancel an idea out. As I will no longer be able to print as and when I want to, I want to bring this idea into more sculptural or photographic works. Industry is overthrown by electronics, I had developed a fascination with adverts and neon signs as a means of promotion, the signs are designed to attract your attention and distract you from its surroundings, is this not the sole purpose of consumerism?

Degree show is just the start, I have lain a foundation for the future, despite the anxiety that comes with destall and the uncertainty of where I will end up, I strive to not be disheartened. If I managed to get a degree in art then I must be along the right tracks, my ideas still hold a message that needs to be stated, just because my work was not loved by everyone, it does not mean that it was awful. Sometimes the truth of the state of society is too much, my work held so much controversy, as The Scotsman said, it was “agit-prop”, I have to respect that and still take it as a comment of worth as I provoked an idea that one day, could be the catalyst of an awakening of a new perspective.