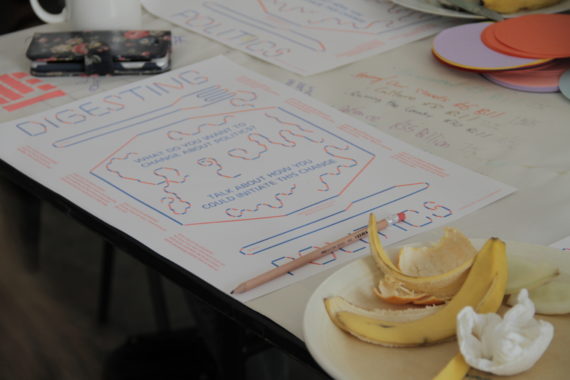 The last of the #DigestingPolitics lunches was run by Company Drinks, a community drinks enterprise based in Barking and Dagenham that links the history of working-class east London families “going picking” to Kent with the set up of a new local drinks company.

Company Drinks started as an art project set up by Kathrin Böhm from Myvillages, as an invitation to residents across the borough to go picking again, recognising the fact that a lot has changed since the “hopping days”. The geographies and demographics of east London have shifted dramatically, resulting in a less clear division between city and countryside and a much more diverse population.

Company Drinks started to talk politics in public during the run up to the UK’s EU referendum in 2016, making a clear connection between the politics practiced and those on a local level (as suggested by the project), with regards to the vote we were given, to decide on the future of national politics.

The first public attempt to fuse drinks making with making political opinions was during the ‘Sour Brexit’ production workshop at Dagenham Library in late April 2016. Visitors were invited to make a new drink, mixing English strawberries as a base flavour with cidric acid, to represent the sweetness or sourness they would expect from a possible Brexit vote. The drink was later served at public events, while the overwhelming public mood in the borough was in preparation for the Leave vote, anticipating the 23rd of June as a new ‘Independence’ Day.

Within the spirit of ‘Keep it Complex – Make it Clear’ Company Drinks sent a mail out with the suggestion that if regulars to their programme enjoy the collaborative, open-minded and collective spirit of Company Drinks, then they should consider voting to Remain. For the first time we made it explicit, that Company Drinks wasn’t just a nice community activity but stood for values that at the time were dangerously demonised as liberal, international and un-patriotic.

Company Drinks remains first and foremost a new type of drinks enterprise, merging the social and commercial meaning of the word company, but contentious political topics are made public once in a while, to become part of a discussion around what we are doing collectively, and why.

So to host a #DigestingPolitics lunch fitted perfectly, and the decision was made to use a discussion around the politics of food as a starting point, making it fairly easy for everyone around the table to contribute.

24 people came for the lunch, with everyone having a different connection to Company Drinks, either as a regular picker or volunteer, a local partner, someone connected through a growing or food network and collaborators.

The conversation covered lots – from food waste in supermarkets to the fatally cheap chicken and chips offers near schools. We ate, everyone had their chance to speak, and two hours of discussing as a group passed in no time.

It was clear to everyone at the table that this was clearly a starting point.

The conversation was shared, different opinions became apparent, no-one was shouting someone else down, there were more surpises than annoyances, and the general feedback was that these rounds should be continued. Both as a way of practicing and culturing public conversations around politics between people who don’t share the same opinion, and secondly as a mini forum to work on doable changes when it comes to food politics.

As a result, #DigestingPolitics lunches at Company Drinks will continue as a fixed monthly feature around the politics of food, with each lunch resulting in a series of calls to action that can be applied at Company Drinks itself, at everyone’s home and as a collective suggestion to the council to change local politics and to the local MP to lobby on a national level.

Dates and topics for the 2018 #DigestingPolitics lunches will be published on the Company Drinks website in early 2018.