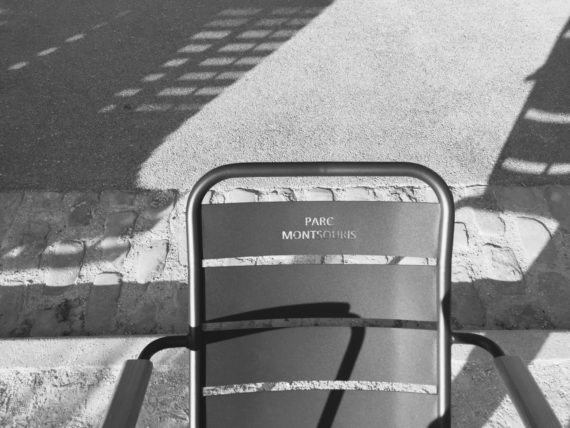 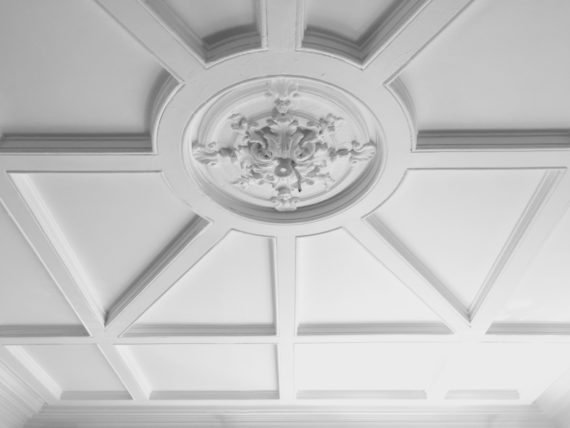 Although already familiar with the location of my stay in Paris, following a DIY Residency and visits in 2016, I have no set plan or expectations in mind for this short time. I have brought a couple of books and minimal materials, I am simply making myself available to look, think, read, and probably draw.

Arriving at a space to unravel my thoughts, with some distance from the places where I make work in the U.K., I pick up the owner’s copy of Jurgen Partenheimer ‘Gentle Madness’. I open it at a text, ‘JP fur W.H.Auden 1999’ which includes theses lines:

‘…The essence of creation is doing things for no reason, it is pointless.

The artist is the person who stands outside and looks

Stands even outside himself and looks at his daydreams.

This table is six feet long…” 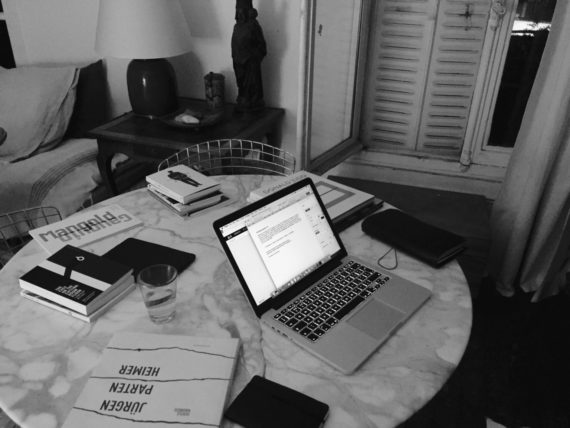 Check out #diyresidencyparis2016mp for last year’s record on Instagram @marion_piper 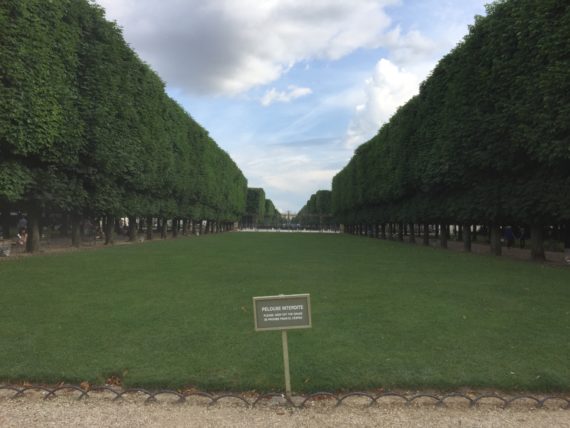 I find myself in the parks this week; absorbing, looking.

Park Montsouris, opposite the apartment where I am staying in the south of Paris, was built by Napoleon III and Baron Haussman and opened in 1869, it was designed in the ‘English style’, like a London park but with none of the usual French formality, no geometric pruning of the trees, as at Le Jardin de Luxembourg and Le Jardin des Plantes. Previously a stone quarry the park is situated on one of the highest points in Paris it is positioned over the catacombs. It was conceived as a place of relaxation for the growing population of the city. 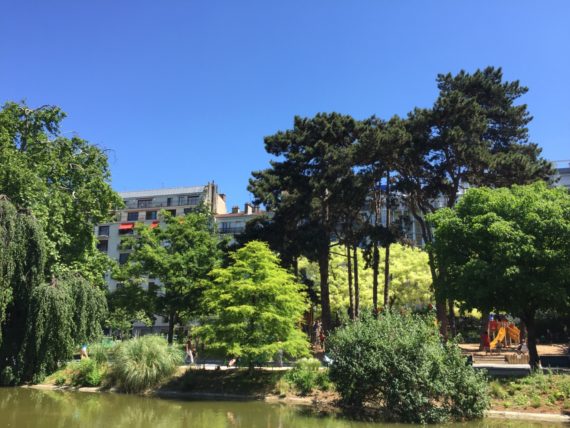 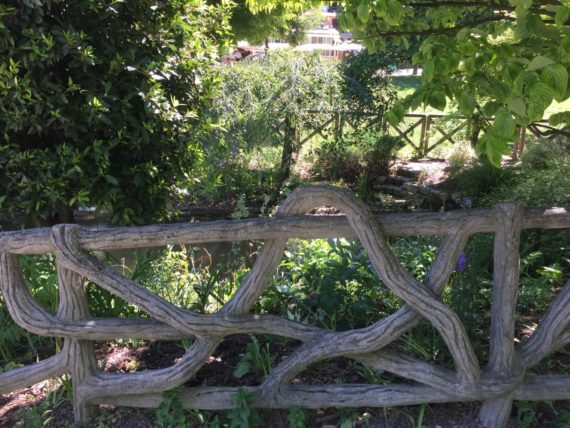 Many people have come to sit and read for half an hour or more, I also have a book with me. Looking up from the page I see a moving tableau of people meeting, tlking and walking, flowing into the ongoing narrative of the place, the park is activated. With its close relationship to architecture, the park, made up of rooms, furniture, objects of art, and organic decoration, offers itself as a stage for playing out life. 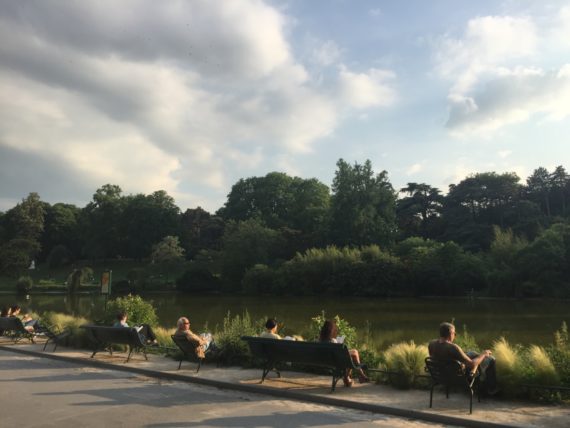 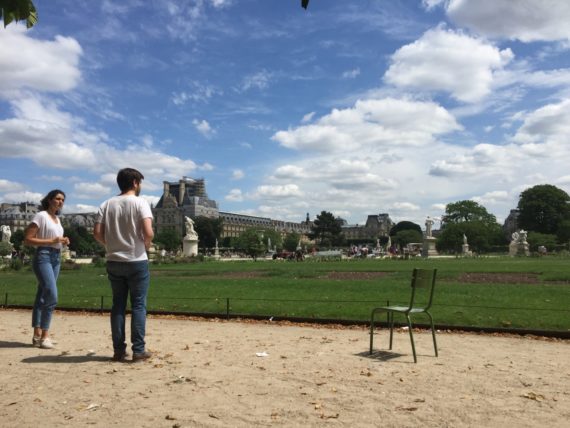 I am struck every time  I enter the park by the overwhelming feeling that I am stepping into a timepiece, a place where patterns of movement are and have been replayed in multiple loops for decades. This was once a drawing that has been realised, with its paths, a lake, a water cascade, and importantly, no areas where it is forbidden to walk on the grass. There are amongst other thing, a carousel, a kiosque, a pavilion, a railway lina puppet theatre, statues, the French meridian line (1) and a pair of black swans. 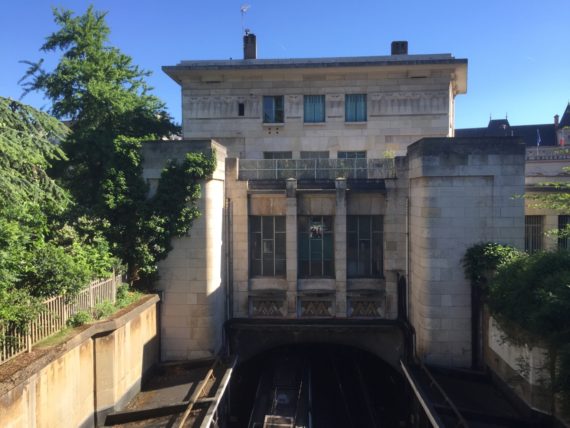 The gateways in the blue railings allow access into this constructed park world. Entering it feels as if one has walked into a book, or many books.  This bordered space is structured to facilitate its characters. I l similarly like to wander through books. To feels the space and stroll around within the ideas, circling sometimes or moving in a straight line 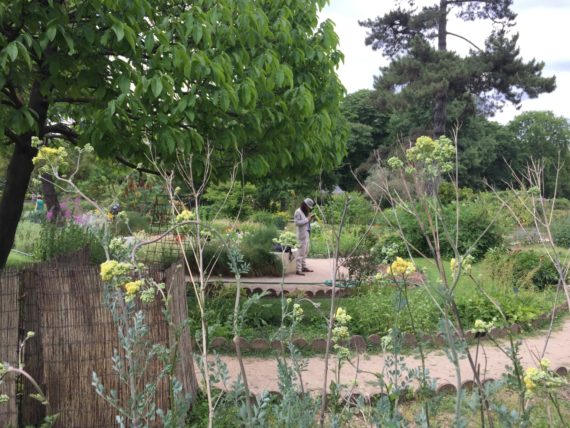 The act of drawing is aligned to all this for me, a wandering through. A  simple structure facilitating free movement and emerging patterns, rests and switchbacks. But above all its about watching. Looking at the pages as they they are prepped and moving in and across; containing and continuing.

I have been drawing in small grey covered books, and a French language school text book. 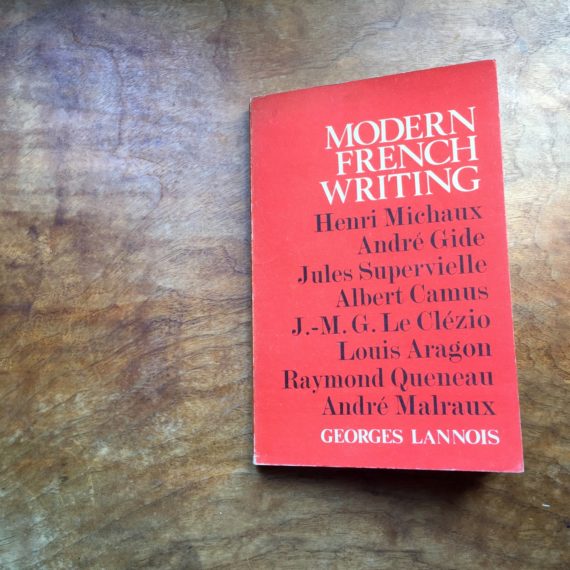 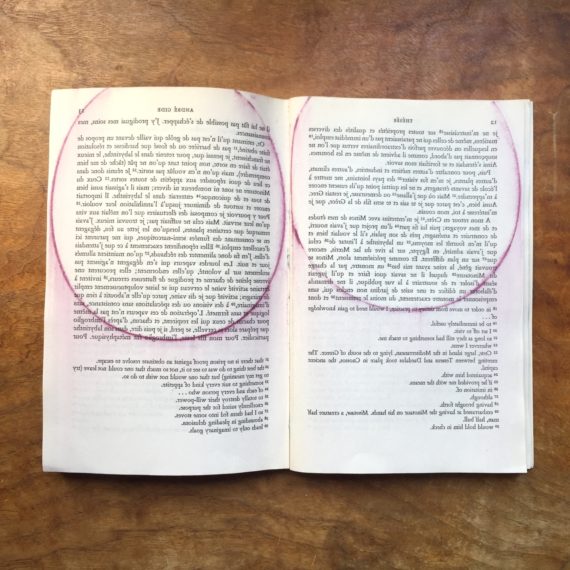 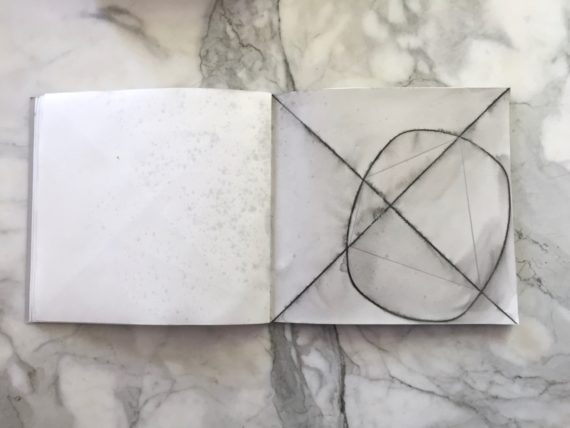 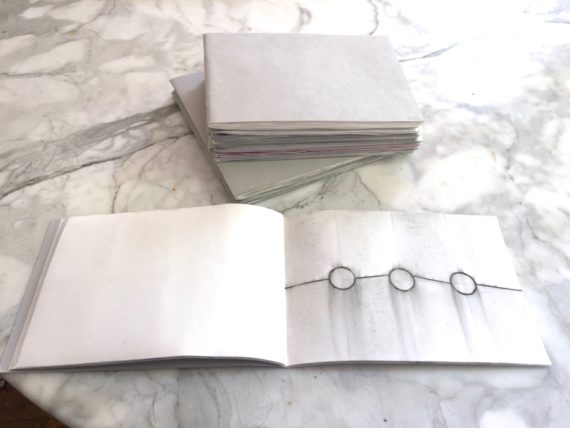 (1) A stone monument in the Park indicates the location of the Meridian of Paris, an imaginary line that passes from north to south through the center of Paris. This line, first defined by French astronomers in 1667, was used as the zero point for longitude on all French maps until 1884, when France agreed, reluctantly, to use longitudes measured from Greenwich Observatory near London instead of Paris. (Wikipeadia)

I took a bus ride to the Centre Culturel Suisse, in the Marais district, to see Silvia Bächli and Eric Hattan’s installation Situer la différence.

I first encountered Bächli and Hattan, at their show at MK Gallery in 2013 ‘What about Sunday?’. Hattan describes himself and Bachli as contemporary flaneurs, ‘We walk around and see things and remember them.’ Their work is always linked to the site of exhibition in some way, with a preparatory visit which led to new drawings and films, for the MK show and with a changing and specific three stage installation in Paris this summer. There is a lightness about their work, a sense of the uninterfered observation of the overlooked everyday, this is then evident in their elemental approach to art making.

Viewing Bachli’s drawings and paintings, with their seemingly understated fragments and quiet memories, requires the viewer to pay more attention to the reading them. Reminding me of the Partenheimer book I was reading yesterday, where Werner Schnell  writes:

“Partenheimer is able to make his drawings operate on several different levels. They demand from us a complexity of approach, for they refuse to be depictive in the conventionally accepted sense. Thus it is above all its syntax, which is the vehicle of meaning.’ Whilst we know that this complexity of approach may help us towards an understanding of the world, we also know that like the syntactical structure of the language spoken by Partenheimer’s drawings and paintings is made up of abstract forms invented at the very moment the artist draws and paints them.”

I want to wander in the ordinary, look and hold my gaze in the peripheral. Slow down the looking. Watch and feel the movements around me, listen to the sounds patterns.

Back at the table, I wonder how to bring something to the, ‘strange torture of the blank sheet of paper, where you must open a window that is not the one you just spotted just now but one equally insistent in its truthfulness’  Julien Green Paris, 1983, Penguin Modern Classics