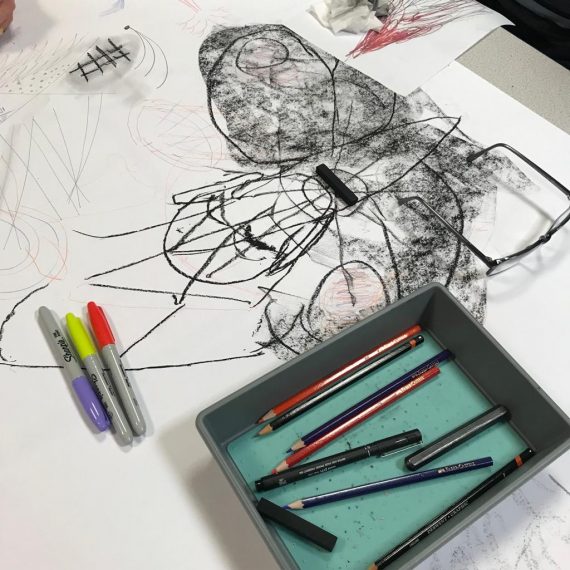 Anji and I have been talking and planning these workshops for about two years now. It started with regular meet ups between us, to share thoughts and ideas about the possibilities of creative art workshops for people living with dementia.

I had been volunteering with a local dementia group and Anji had very recently lost her father to Alzheimers after caring for him for 10 years throughout the progression of the disease.

Arts4dementia held training and networking sessions that we attended and this provided vital support and practical knowledge to help us progress the ideas further.

We approached Stevenage Museum and they offered us a workshop space, support and guidance and a home for this pilot project.

We were absolutely delighted to get funding from Arts Council England, Stevenage Borough Council and 34 amazing people on Crowdfunder.

And finally we have got this project off the ground!

We are running eight half day sessions for 12 Stevenage residents either living with or caring for someone with dementia.

Over the eight sessions we will be exploring drawing in many different ways to engage, communicate, explore and interact.

Drawing with movement was our second session and we introduced it by looking at artists that use bodily movement to create drawings.  A record of an artists physical action. Susan Morris’ ‘Plumbline drawing’, her flicks of graphite covered thread on paper, was one of the works we looked at. This idea of creating a drawing that is a record of an artists particular quite simple action. There was some interesting comments as they considered the piece and someone compared it to a barcode.

We also looked at Tony Oricco’s body drawings. The participants were really very interested in a film we showed of Tony Orrico, laying on the floor like a human spirograph. We had some great conversation about the piece and how it is a record of his physical body.

We moved over to our working tables, where we had set up an activity with lengths of string and ink. The participants saturated their string in coloured ink and then after carefully laying them on large sheets of paper, pulled them in strokes. We had two people to one sheet. The group became very engaged with this activity and the movements became quite animated. At the end we had quite wonderfully free and playful marks left by the string. We thought some compared to a dance.

We also did an activity with ink filled balls, which was also done in pairs. In a tray they rolled the balls around the tray, trying to control them with their movement. It created much laughter and again a real physical bodily exercise.

For the second part of the session we looked at the Picasso light drawings and then set up a camera to try our own. Some people were reluctant to do this at first. I think because it was set up with the camera at the front, requiring participants to come to the front of the room to do the activity. This made it much more like a performance and a few felt quite unsure about being in this situation, particularly as they were also a little unsure about the technology.

With a little reassurance we managed to get most people to have a go but we realised quickly that there was probably a better way to do it and not make it quite so daunting, like bringing the camera to them rather than the other way round. The light drawings really required large, confident movements and this was also something that many in the group were a little reluctant to do.

It was interesting how using the technology altered the experience and created a layer of uncertainty and apprehension that was not there with the other forms of activities we had been exploring.

The session over all was a playful and energetic one with lots of conversation amongst the group. They were keen to give every task a go and for much of it were fully engaged in the processes.

Anji and I felt hugely positive following this session, going over the work and rather energised ourselves.

The plan was to start posting from the start of this project but… great plans and all that. Here I am finally writing about it and we are almost halfway through.

The summer of planning, recruiting and promoting the project was so busy and we got very excited working through and trialing all the different techniques and activities we were going to explore with the group.

We also had the 12 willing participants to find. We knew this wouldn’t necessarily be easy and spent quite a few hours leafleting, going into local groups, care homes, libraries, and the local paper.

But with relief we began our first session on the 5th September with a full group of 12 wonderful people, ready to get stuck in.

This first session felt like it had had such a build up for Anji and I after so much planning, discussion and trials, that the warm up activities provided us all with that vital chance to relax and loosen up.

We spent this first session focusing on mark making and exploring the range of materials on offer. With the whole group of us working on one rolled out piece of paper, it was amazing to see people get stuck in. There was a real sense of curiosity and exploration. It is fantastic, they have all come open and willing, ready to give it all a go. As soon as the first session finished and Anji and I took a moment to breathe, we were floating on air.

It made me realise how special it is to be working with people, creating together and exploring the joy of materials. We wanted to encourage a sense of freedom, not worrying about whether the marks are right or wrong but enjoy making them, letting go of judgement.

They responded so well to the challenge and made me realise, we the artists are probably the ones that need to listen to our own advice. First session and they have already make some really interesting, fascinating work.