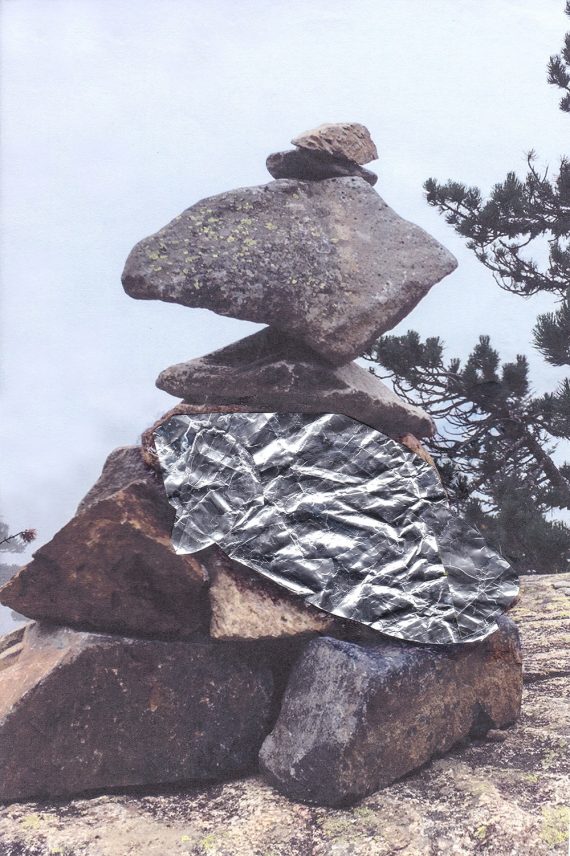 This is probably my final post for this project – it seems a bit weird amidst all that is going on. However, my plan was to share some final images and thoughts on my installation in ‘Fool’s Gold’, my two person show with artist Pamela Schilderman at Rugby Art Gallery and Museum that closed on Saturday 14th. It’s difficult to think about anything without thinking about you know what – so my summary is a bit about that too. 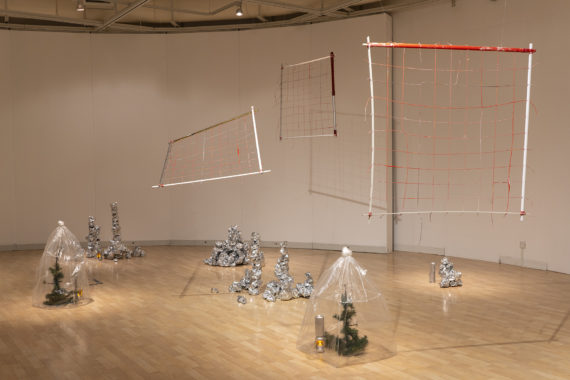 Together ‘Cairns’, ‘Quadrats’ & ‘Winter Blues’ created a landscape of artificial organic forms or ecological instruments, with pathways in-between. All of the works were made predominately from discarded materials I found on the streets around my studio, or that have been collected for me. Where possible they are made in a way that they can still be recycled at a later date, if I wish – considering the environmental legacy of my works is an important part of my process. 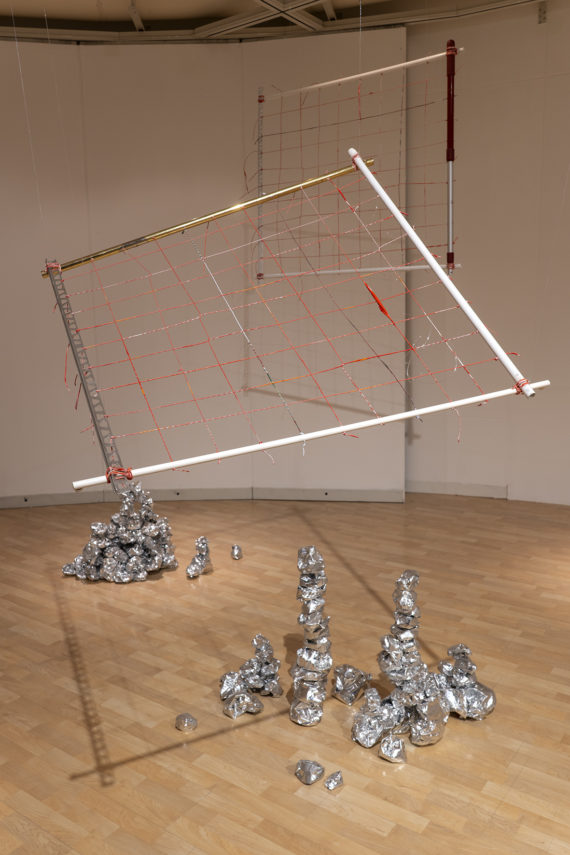 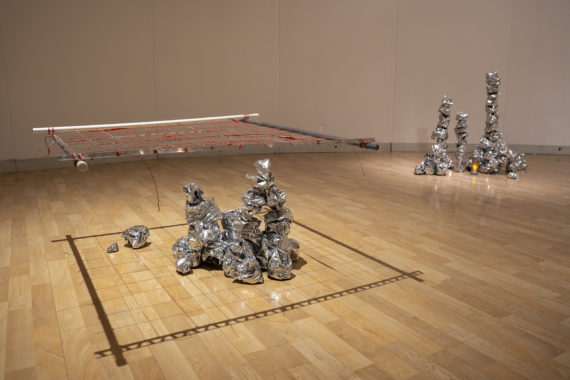 The ‘Quadrats’ framed ‘Cairns’ or empty and barren spaces. The quadrat grids are a cord I have made from red plastic bags. The red cord is a recurring element within my recent works – binding and connecting contradictions. Traditionally quadrats are laid down horizontally. Within the ‘Fool’s Gold’ environment they hung at different angles challenging our perspective of our ‘natural’ landscapes. 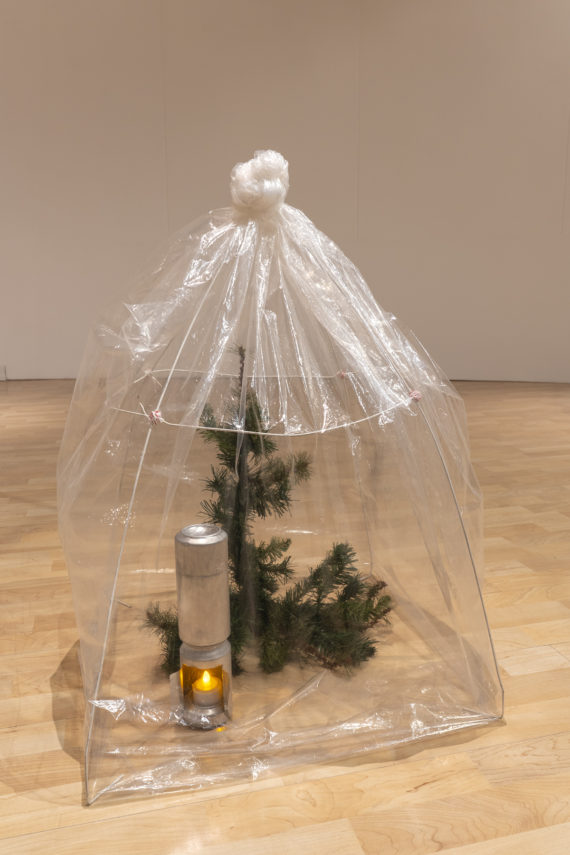 I have been thinking a lot about the barriers we put up to protect the non-human from the human and vice versa. That feels particularly relevant now as we protect ourselves from each other. ‘Winter Blues’ is a poetic assemblage, made from a plastic bag, parts of a second-hand Christmas tree, and a lantern made from aluminium cans with rechargeable LED lights. It could be seen as a bell jar or green house, but the nature and light it nurtures or shelters the viewer from is unnatural. 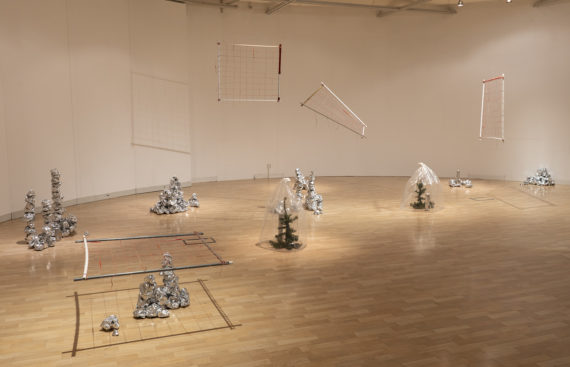 The installation was about what wasn’t there, our connection to nature and ultimately each other. As the pandemic crisis unfolds it feels like we are already reassessing what is really important. Let’s hope the positive elements of this crisis are long lasting.

I will use these strange times to reflect on what next. In the future (a normal one) I will take the ‘Quadrats’ and other discarded materials back outside, on expeditions. I will frame natural urban spaces or different communities through the perspective of these materials. I will experiment with sound and scent too.

Right now though, I think it’s time to take stock of what it means to be an artist. How and if this role is valued? Should this role be valued, and if so, am I utilising it in the right way? 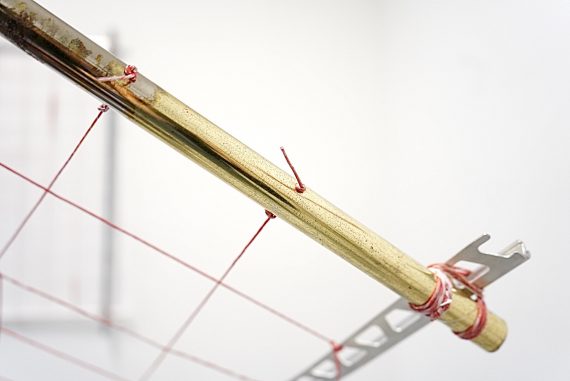 There is under one week until Pamela Schilderman and I install our new work for ‘Fool’s Gold’, a two person exhibition at Rugby Art Gallery and Museum with associated events in Rugby and London.

I am thinking about how my three new series of works ‘Winters blues’, ‘Cairns’ and ‘Quadrats’ will be hung in relation to each other.

The groupings will be led by the ‘Quadrats’ series.

In the ecology world quadrats are laid down horizontally to frame a habitat and count their inhabitants.

From this starting point, I have played with how I will use them as  viewfinders to look at our relationship with nature and to frame what we have chosen to value and discard. My ‘Quadrats” will be hung vertically, horizontally and everything in-between, framing my other bodies of work. Made from debris, they will re-present what is viewed through them.

In the future I would like to experiment with taking the quadrats outside of a gallery setting. I am interested in how the quadrats could be used and made collaboratively to frame and highlight local urban ecological or social issues in indoor and outdoor spaces, in partnership with local communities.

‘Fools Gold’, opens on Saturday 25th January at Rugby Art Gallery and Museum. This exhibition seeks to challenge society’s consumerism and its impact on the environment. Through the transformation of waste and natural resources artists Pamela Schilderman and Hayley Harrison invite visitors to engage in conversations around the climate crisis and our use of materials. The exhibition is accompanied by workshops, talks, a commissioned article, an animation and a live installation.

There will be an In Conversation artist talk on Tuesday 6th March at Rugby Art Gallery and Museum at 6 pm (tickets £6). This project is funded by Arts Council England and Rugby Council. 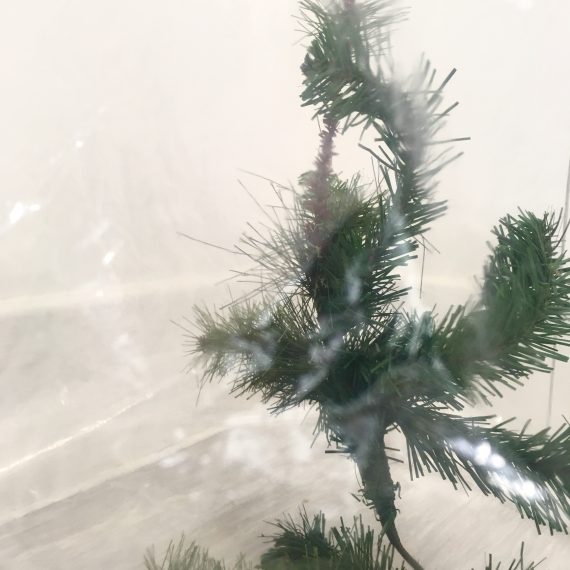 Originally my plan for my piece ‘Winter Blues’ was to use branches from ‘real’ Christmas pine or needle trees that are discarded along pavements in January – an act I find disturbing. This year I have been working with discarded non-human debris. In a recent performance in a domestic space, I introduced weeds to houseplants, planting them around the space and in audience member’s palms.

The museum collection is next to the gallery, meaning organic material has to be quarantined or contained, so that bugs, woodworm, etc can’t contaminate the collection. Due to the timeframe of collecting the real trees this would be tricky.

I understand and respect this policy, but it did get me thinking about other examples of when ‘nature’ is seen as a threat, to be contained or cleaned away. On the flip-side I was thinking how we reproduce it in great detail, are in awe of it, and want it in our homes at a time of  hibernation and reflection. Amongst the wide-world understanding of ecological crisis, and the well-being movement houseplants have been re-welcomed into our homes.

I’m now playing with the tension of  our connection and disconnection with nature, with the need to put nature and on a pedestal, and in the next breath trample it down. Ironically these metaphors will be made with artificial nature; branches dismembered from a second hand artificial tree.

Opinions still seem to divided over fake Christmas tree’s v’s real tree’s. Artificial trees can be used for many years but there is the carbon emissions produced when they are made, transported and eventually dumped in landfill to consider. Potted trees can be reused, but don’t do well next to heat sources, and tend not to live that long if they remain in a pot.

Cut real trees are collected by local councils, and end up in a landfill (creating carbon emissions as they decompose) or are shredded and used in parks. It all seems to depend on how long you keep that artificial tree and how it was produced in the first place. 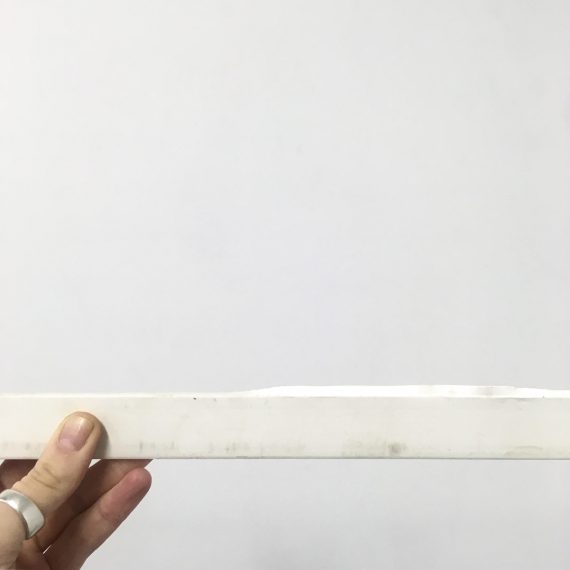 ‘Quadrats’ will be one of the three new bodies of works I am making for ‘Fool’s Gold’.

The square structures will be formed from discarded ‘sticks’. From the the streets I have collected abandoned mop poles, rusty poles, brass poles, electrical casing, and various wooden frames.

I am cleaning and sanding them, safe for a gallery within a museum setting. I flip from welcoming them back as usable objects, to imagining them as a raw material, found on the ground like a rock to be chiselled or a fallen tree to be carved.

As I curate and group them together – I am arguing out the desire to make them new and fresh with a coat of paint.

Instead I am drawn to bringing out the aesthetics that signify they are abandoned.

The scratches, dents, and stains.

Do I feel I have an affinity with the materials I use. Do I feel sorry for them, that they have become the abandoned. What do I see in these materials – what looks back at me.  Are they  – us? Our relationship with each other, with the planet – with dying ecosystems?

Quadrats are a tool used in ecology to sample the average amount of a species in a habitat.

My ‘Quadrats’ will act as viewfinders, framing our confused relationship with ‘nature’. 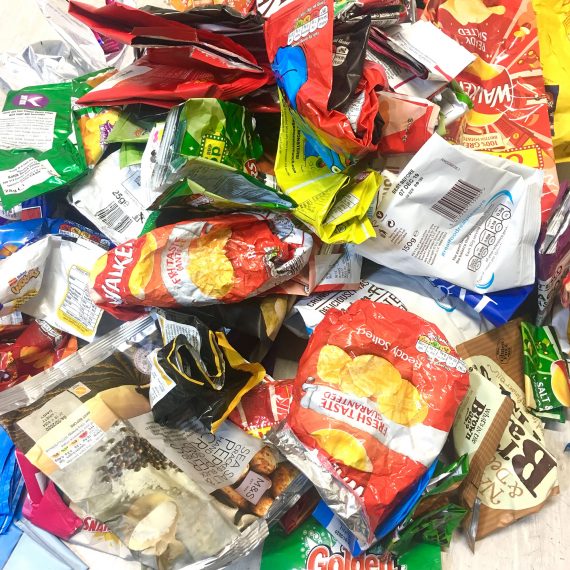 As part of my process with discarded materials I consider how recyclable my work is. What if I make a site specific installation that is temporary.

My work ‘Cairns’ will be made from discarded crisp packets. At this stage I don’t know if this work will be permanent / collectable / temporary. As most crisp packets are made from metallised plastic film they are difficult to recycle, you can’t just pop them in your recycling bin (if you have one).

Currently crisp packets (all brands) can be posted to Walkers or Terracyle. It’s a very small start, according to this Guardian article. ‘Claims by the crisp producer Walkers that it has recycled half a million empty crisp packets in three months should be taken with “a pinch of salt” because they represent 0.01% of plastic waste from the number made and sold annually, analysis has found’.

Those statistics were from March this year, but I doubt much has changed. There are similar statistics for the percentage of recycled coffee cups.

Ultimately we need to stop using single use plastics. Producers of this packaging should be using the profits they make to find alternatives ASAP.

But we know all that.

After some experimentation the most efficient way for me to attach the packets together, is by using a glue gun. However it’s not removable, (and it’s more plastic), making the packets un-recyclable. As a compromise I will use paper fasteners. It will take a little longer, but the packets can be dismantled, recycled or used again, and the paper fasteners reused in a future work.

I am conscious of how I source these packets. I find most of them outside a school near my studio, or I collect them from the towpath (I live on a boat). Friends and colleagues are also collecting them for me. I don’t want to encourage people to buy crisp packets. I explain how they can be recycled and only to collect if they are already something they consume. But it feels like an unresolved part of the work.

I also wash the packets and there is a carbon impact involved in that too. They are dried with tea towels.

I feel the pressure of the restrictions I am making myself, especially when working towards a deadline. But overall it feels right.

To slow down or reduce the impact of the climate emergency we need to make sacrifices. I think that is why people are so angry at Extinction Rebellion or believe that the 6th Mass Extinction is a hoax – the consequences of our actions, and the sacrifices we need to make are too frightening. It’s much easier to RAGE, or leave it to someone else.

And yeah big organisations need to take the lead, but individually it’s our responsibility too. No?

I think this is a conversation that artists and galleries (particularly the big ones) should be having. There is no point writing an environmental policy or sending in your annual figures to Julie’s Bicycle, only to end up filling your gallery with plastic that ends up in a landfill.