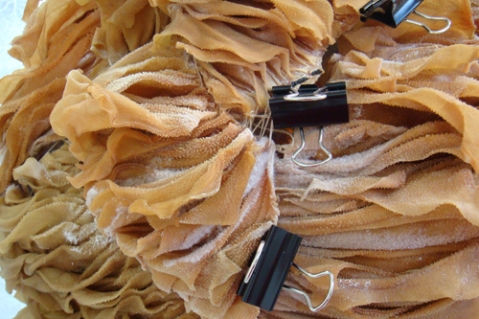 I have been invited, (15 Sep – 15 Dec 2007), by Acte de Naissance to investigate and research the history of Valenciennes and the surrounding area. In January and February 2008 at L’H du Siège I will exhibit the work developed during my three-month residency.
www.hdusiege.or

All comments welcome at www.elpihv.co.uk

The exhibition finished on Saturday the 23rd and I just de-installed the exhibition yesterday and today. I was really worried about the taking down but pleasantly surprised how easy it was. I was hoping to take the work down in one section but this was not possible and had to separate the outside in three sections and the inside in four sections. Three of us slowly took the sections down without any damages.
Now the show is over feels very good somehow!!! I was also very nervous about going back; because of the problems I had at the opening, but everything when well.

I had lots of positive feedback and book of interesting comments.

Time seems to be going so fast, almost the end of my exhibition in France. I am off to visit my family in Macedonia tomorrow for a week and as soon as I get back I am going back to France to take the exhibition down.

Is a very funny feeling, feels as I’ve just put the show up and am already taking it down. I have had no correspondence from either the director or the curator from the Gallery so really have no feed back in how the show has been or is progressing…… I am really looking forward to finding out what has been happening, how are people reacting or seeing the work.

I haven’t had much news about the exhibition and not really sure how is it all going. Last update, well short email from Adeline was that one of the pieces ‘Bad Hair Day’ is going bit mouldy and she was very worried and didn’t know what to do. Now has been treated again and I haven’t herd anything further so I guess no news is a good news.

A part from that there has been few reviews in the papers which I have to translated to see what they are really saying,…..

We’ll keep you posted if I have some more news.

I am bit late with my update of this blog and I do apologies for that.

Last week I was back in Valenciennes to finish the installation of the work and open the exhibition. It was a mad week with many problems, firstly technology was the main problem. Trying to show a double projection with two different DVD players wasn’t going to happen. We managed to borrow professional pioneers from www.lefresnoy.net and they kindly connected the two DVD players to a computer so we can start them in a same time. This solved one problem but we still had a major problem with the two projectors. It was impossible to adjust the projectors, they where hanging from the ceiling attached upside down by screws to a timber shelf, which made impossible to move. Only thing we can move was the trapeze but this was not enough. Also there was a problem with the colour, one projector had green and the other purple cast so the images looked completely different and out of sink. With many discussions and disagreements the Gallery decide it, without my agreement to run and show the videos…. And there it was the exhibition opened. I recorded the work on the Saturday morning and came back to England. So now a week in I don’t have any news and don’t really know how the exhibition is going!!!

Hope you all had a good Christmas and New Year and are ready for a start of a new year. Well I am glad to have left 2007 and hoping that 2008 will be much more productive. I collected the print yesterday from Metro Imaging and looks great I am very happy with the colours and the quality of the print. Last night I also went to an opening in Studio 1:1, which was very well attended. There were many people from Braziers Workshop and was lovely to see them and catch up with them. Sadly made me feel bit sad of not leaving in London any more and not having gatherings like that here in Brighton.