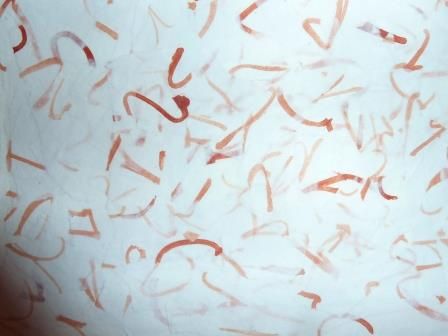 On the wall at college is unneutral, which I haven’t added to since last week when I stuck pieces on partially so they stuck out. These bits are superflous and so now I’ve torn them off and thinking now how to destroy the writing further on this. Most likely next step is to tear the whole piece up and stick onto another sheet of card to break up further.

Fiona Banner has come to my attention and now I have read a bit about her and looked at her work, I wonder how on Earth I have not come across her work before?
She’s working quite a different manner to me, but her material is words and similar avenues of exploration.

I haven’t stopped to think about the individual pieces of work I’m producing enough. I’m impatient to make new work. Around a month ago I began breaking up writing by tearing my (frequently used) small things phrase (in sienna) and sticking onto card in various sizes.

Now I am doing a very similar thing but focussing on the gap between the pieces more but working into the space, pieces of work called the gap.

I think there is more I could do with the small things series. I’d varied the size of the card I worked on. In the smaller postage stamp sized pieces the cut up gestures of writing were layered on top of one another, so only the top few layers ended up visible. As the support became larger, more space for the fragments to spread out on. The focus on these was on the interaction between marks. Because the background of the paper written on was the same as the support, the gaps between the pieces of torn paper weren’t highlighted. In the gap I’ve been drawing around the pieces, adding definition to the edges. The first one (image attached) has a ritualistic feeling about it. To me, this piece isn’t neutral at all. The lines around the parts of writing play with the spaces in between, creating new shapes with their paths. I have managed to do what I was attempting with wood for the trees (large green and grey painting, with vertical green lines and grey block, drips and pencil writing) – with that piece I wanted to have frission between two contrasting marks. So here with the gap I have the written gesture and the drawn gesture trailing around the pieces in an unplanned way and without notational meaning.

I had a tutorial with our temporary course leader – Robin – on a two week visit.

Robin probed me on whether I am interested in the meaning of the words I’m using or the form – it’s the form of writing broken down, rather than their meaning. The piece I am doing on the wall at college ‘unneutral’ – I have tried to force meaning into by writing the names of people I know and cutting those up. This doesn’t have any effect on the piece or me. It is still broken up words. Cutting the names up doesn’t stop me knowing the names, it hinders others from reading it. I’m not interested in that – what is exciting to me is what new meaning the forms might take on, but more that I might find something in the process. Once back working with unneutral I started to glue the writing in loops, coming away from the surface as the flat surface was really dull.

Last night I was playing with the forms of handwriting in small macquette 3D forms, prompted by items I found around my house and garden.

I was also writing more material to work with. As I’d decided that the content of the writing didn’t matter I started copying out a page of dictionary, but this was mind-numbing and I soon began stream of consiousness /free writing which flowed much better than any copying. I’ve been copying Shakespeare and repeating phrases recently. Breaking up a short phrase helped to limit the material I was working with, and I varied the size I worked on, but with the same size and amount of writing – varying the space available helped me to push the form around in playful ways. Again I find that having a limit / s aids creativity.

3rd I wrote about what I have been trying to do ‘Finding ways to respond and learning how to push what I am doing so hard that I fail, go past a critical point in the process and discover what was almost there’.
11th working towards w0budong exhibition. Pebbles research and thinking. Presence & then absence interests me.
23rd How can I find writing in the stones. Joining fragments of gestures found in the stones.
27th Because the marks have been found, does that necessarily mean that what I have formed with them has no meaning?

11-15th w0budong prep and exhibition
20th Thinking phase (long – due to many train rides to and from Manchester
Began reading ‘Lines; A Brief History’ by Tim Ingold (still reading early May)
21st Installed ‘my cup runneth over’ in Brick Lane for Coffee Art Project
Decided large ‘wood for trees’ was finished. Over simplified notion of grey = urban and green=countryside… Despite the fact that I am over simplifying things by relating the colours to places so basically, I like it. By simplifying something this extremely, I can then complicate it back again in my own way. Where would I be without basic (& the basics!) I do have a tendency to over-generalise things, make broad-sweeping statements, but they are useful in revealing my assumptions.
Refocussing my practice back on to writing>>> meaningful marks to random marks and back again.
The liminal place between the two.
In wood for trees 2 I put meaningful and random marks together.
26th eyes closed charcoal writing
Trying to be less neutral.
Spaces between and underneath writing, quite beautiful (e.g. in Wednesday painting with charcoal – overall pink look – 26th March)

(this last thinking phase nearly swallowed me whole, I wrote in blog)
Realising that Organising stuff then Painting doesn’t work – especially in holidays – decided I must Paint then Organise, otherwise I don’t get any painting done.
3rd Began breaking up writing. Started with printed text and moved on to my own painted writing.
6th burnt sienna acrylic writing of ‘we can do no great things…’ & subsequent layering on a postcard for postcard art project set up by Kim Bellamy.
What might the gap look like?
13th FAB fridge entry
thinking ‘small things’ in Sienna can be broken up further to make completely random
Trust my instincts more?
25th
After seeing Matisse’s cut-outs exhibition it has led me to question why I am not making more work (if he can be so prolific and creative with such limits on him physically)
Fear
what would I do if I wasn’t afraid?

Using family names to cut up isn’t de-neautralising my work. What I do with the fragments could be.

More playful handling of fragments needed (less neautral). The neaturality is giving me nothing to question.

A BOOK of fragments (inspired by Matisse’s Jazz) playfully arranged.

What do I notice from what I’ve been doing? (Considering…) 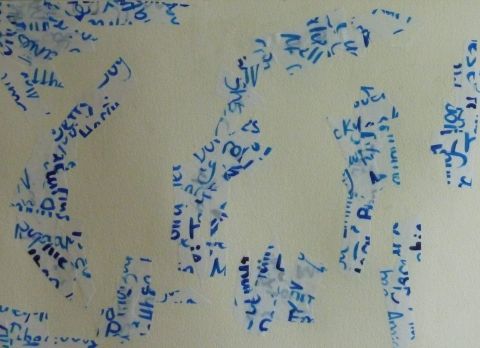 Now reviewing my work since January.

14th Jan Some methods (ie working with paper on wall) making me more self-conscious.
21st Jan Quite a simple way of working with paint and pencil. Brushes,finger, pencil, knife being used.
23rd Jan Painting on larger scale. Celia mentioned John Cage in regards to the way I’m working. Aimed to do a painting a day.
31st Jan End of module evaluation.
I’d produced a fair amount of work. Quite varied. One thing I notice by looking back is that if I am ‘stuck’, perhaps I’m doing the same or very similar thing – the moulded cups for example, it could equally be painting – then a way to give my work a boost and to help me see clearly what is going on is to change medium – maybe to go into 3D or into 2D, whichever one I’m not doing and explore my interests with a fresh process.
I described my work (the painting esp.) as primarily listening, rather than the transition of writing into drawing…
Learnt that an hour or two painting (/making) a day is more fruitful than 8 hours in one go.
I can’t tell if I am still not recognising when I am stuck. Probably can’t. What is more important to me now is finding a way to ensure I have regular practical sessions, whether at home or college. Currently (2nd May) I have work on the go in both. Things like trips and meetings can get in the way of this flow of work. Flow is vital for me to sustain my practice. I have come through some mental barriers with my work, but I still need to train myself to be more disciplined in arranging myself enough time to really make work. Make the most of every day. I like comfort and I need to wean myself off activities that aren’t necessary else I will not be able to work enough to maintain momentum post-college (with paid work factored in). It would help me if I just focussed on the one thing I’m doing now (I keep coming back to this) and not to give myself distractions!

Research needed into how others use the mediums I’m currently using.
Talk about other artists work more in my learning journal

The physical nature of my work is varied, yet focussed.
Restricting my choice of material is helpful to create more.
Qualities I found most exciting were the developing subtlety and the expressiveness of the paint. This is something that is missing in my current work breaking up writing. Less clear expression, due to material I’m working with. How can I make it more expressive? My obvious reaction is to say by building up layers of the broken up letters and rather than stick them on randomly, to play morewith the broken up letters so they (almost?) become something else.

Hayward Director Ralph Rugoff talks about artwork that ‘reflects the times in which we live’ – I wonder if mine does? Am I ‘making art about my own experience of contemporary life in my historical moment’? Yes.