In his hand, he holds a memory. This memory I cherish but he can no longer remember. Spending half a year studying my grandfather and interacting with him for him to have no recollection. Its tough knowing that whilst I see him as my grampa, the one who would put me on top of hay bales when I couldn’t reach, the one who would speak welsh to me whenever I visited and for him not to know who I am when I speak to him now, thinking that i’m a farmers daughter and asking how my father is, not knowing that I am his granddaughter and that his son, my father had passed away. Having all these memories with a man who can’t remember makes me wonder how and when all these memories left and how we as a family didn’t notice, going on with life whilst he was starting to fade away.

His willingness to participate in the beginning of the lifecasting process was hopeful but in the time it took to prep for the cast he had forgotten what he was participating in and became difficult to work with. The best way I found for him to participate was to talk him through every step multiple times whilst doing the cast with him. Keeping his hand in the container was a whole other struggle as all I could tell him was to keep his hand still because the alginate was drying and he couldn’t understand what he was doing and why he was doing it. With all the difficulties that came with the casting process the results that I produced captured the strength that my grandad still has whilst showing how fragile and short of time I have left with him.

A week, seven days. I asked my grandad the same questions every day for a week, documenting his answers. The main question that I needed answering was ‘What is his favourite colour’ as I know the question to that answer should have been blue as that’s been his favourite colour since he started buying tractors. My findings showed that 5 out of 7 days he would say blue without hesitation. The other two days he would be confused asking why I was giving him these questions.

These anomalies can be to do with the confusion with him just giving me an answer off the top of his head. Taking these findings and applying them to the wax casting. Whilst creating the casts I decided to take them out whilst they were still setting I got my grandad to interact with the waxes creating the deformities that are seen in each individual cast. 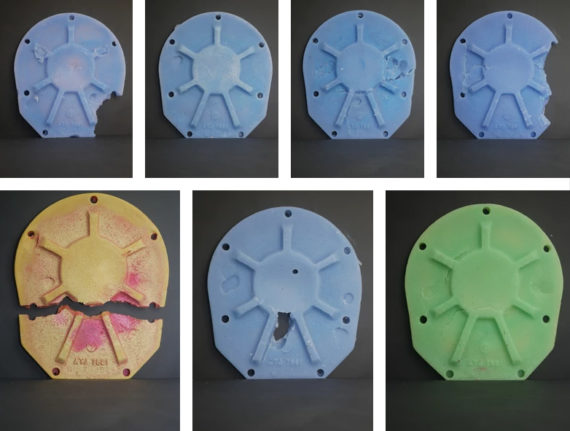 Trying to get a man with dementia to do anything is difficult. Trying to get him to work on anything for more than 5 minutes is impossible. My grandad can become stubborn when he gets fed up about doing something. With my questions and small activities that i’ve had him completing, asking him to continue by drawing a tractor becomes boring and he would rather sit down and watch telly.

The Tractor, one of my grandad’s all-time favorite vehicles. A vehicle that he spent most of his adult life driving. He became a collector, purchasing vintage tractors that he could then restore. This paper tractor I made as an experiment of materials, seeing if the paper could translate into a tractor shape that my grandad could recognize.

He became intrigued with the paper tractor wanting to hold it constantly. As he was so invested in the paper tractor I decided to make it into an interactive piece and got him to colour the tractor with inks. Giving my grandad a selection of ink pens I wanted to see if he would subconsciously colour this paper tractor like one of his actual tractors. The result of this was that he actually stated that he wanted to colour it like a New Holland tractor and was asking for specifically a blue ink that resembled the New Holland blue. He became engrossed in the painting, not wanting to colour out of the allotted segments. 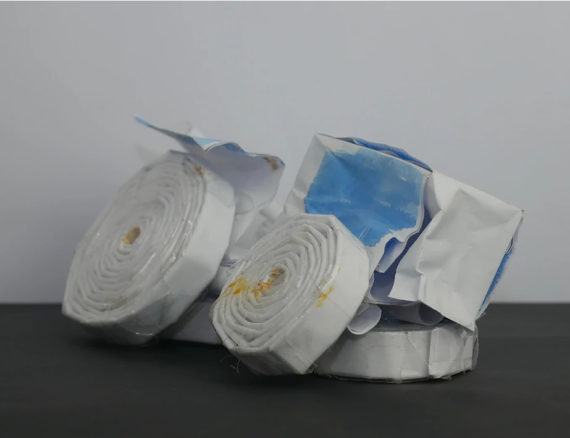 Four Generations, a single image. I gave three of my relatives the task to draw a nuffield tractor free hand. The youngest participant who was 7 gave no qualms and just got on withdrawing it to the best of her ability. My father who was 58 at the time didn’t think his drawing would be good enough and asked to restart multiple times. My grandad who had been drawing tractors once a week for me refused to draw a new one as he could remember having done it before, which was interesting because he couldn’t remember what I had told him 5 minutes before but could remember drawing a tractor after a week had passed. In the end I had to take a previously drawn tractor for this piece.

The varying outlines that were produced is what initially stood out from all the drawings, that even though they had the same subject matter but produced three different outcomes to the drawing that I had created. Isolating these outlines away from all the added details allowed them to shine through. I overlapped these images as they all tended to fit into each other relatively well. The contrast of the black wire against the white walls behind it truly captures the shapes allowing for the viewer to clearly see the outlines and where they overlap creating dark thick lines. 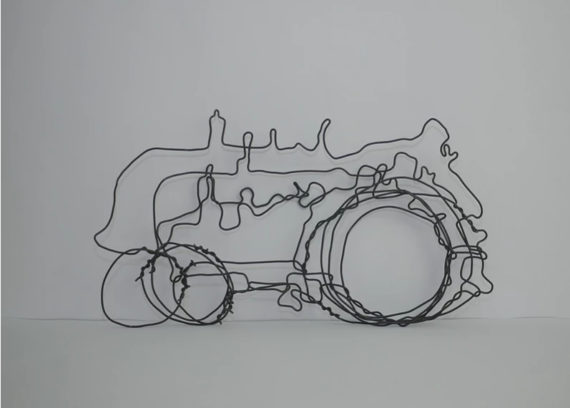 The lorry, a prominent factor within my grandad’s life. His businesses revolved around driving lorries, becoming his main form of income. His life revolved around living in lorries for days at a time, travelling all over the uk delivering. This meant that growing up he was never really around often which led to a limited relationship with my grandad. These lorries represent the aftermath of my grandad having to give up the lorries. He once said that the day he stops driving would be the start of the end, that it wouldn’t be long before we put him in a box, once the lorries were gone he put all his attention into the agricultural side of the business.

These cast lorries are to represent this prominent chapter in my grandad’s life. The deformities of the lorries are to represent the warping of my grandad’s mind and how he regresses back to a time where he is still driving lorries. Repeatedly stating that he needs to go move his lorry or needs to go to work. These casts are in different stages of fragmenting, representing the constant adjustment of his mind and memory. His memory would fluctuate between 10 to 30 years but would be ‘re-set’ the next day. His mind created hallucinations where he would imagine whole rooms as lorry cabs. Representing his mental stability within a familiar form.

A young artist who is developing her understanding of art and its meaning. A part of the Welsh Cast Iron Community, currently studying her final year of Sculpture, casting and carving in Carmarthenshire.