Furloughed artist, explores disengagment from ‘all that’ and engagement in ‘all this’.

History is a weak defence to hate and ‘us against them’ rhetoric, and yet history is not so much an escape as a balm. In the face of so much chaos; the day to day mayhem of conflicting COVID government guideline announcements, state violence at BLM protests, and neo-fascist governments exposing their corruptions like it doesn’t even matter, we are being daily bombarded so relentlessly that there is no way to emotionally reflect before the next bulletin, let alone rationalise or begin to construct alternatives or responses.

History feels irrelevant in times of violence and global chaos, or like if it has relevance it needs to signify something more than an escape or pastime, like it has a duty to act as a defiance. I guess
a) history’s defiance needs to be the offering of proof that continuity exists and

b) history needs to make space and time slippery; opening borders between here and there, us and them, then, now, and the future. 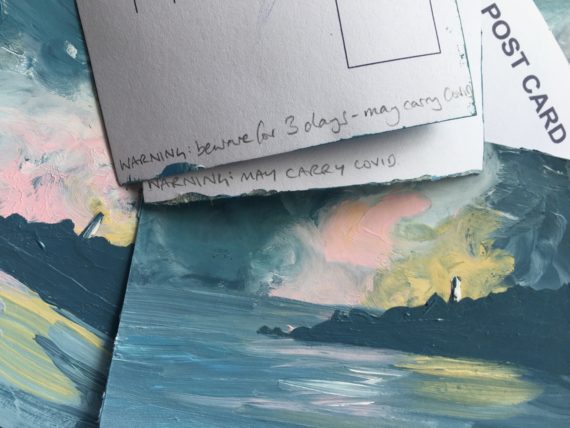 I don’t know if this was a good use of time/paint.

The plan is to send hand-painted postcards to everyone I can’t see but would have done, or would have intended to, if it wasn’t for coronavirus.

I’ve made sure to use my fingers to leave a physical trace of myself. I chose Start Point because
a) I can see it from here and
b) it’s on of my favourite places.

One weird side effect of this is that I can’t help imagining them passing from hand-to-hand and becoming dangerous; like vehicles for the virus which I am sending with love, to loved ones.

I will write WARNINGs on them.

Painting with this conveyor-belt-style method is new/weird for me.
I know it’s a traditional means of making commercial art.

I believe I have great-uncles from the Torbay region who used to paint landscapes like this for a portion of their income. They were, of course, of much higher quality than these postcards. They sold them in Boots. 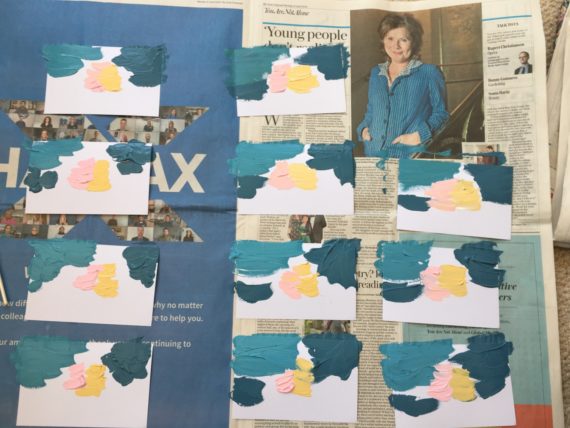 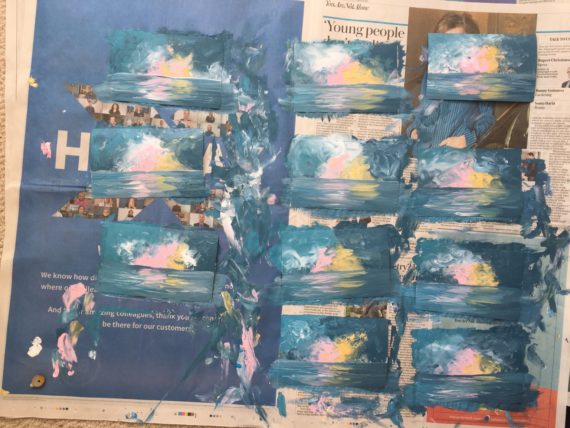 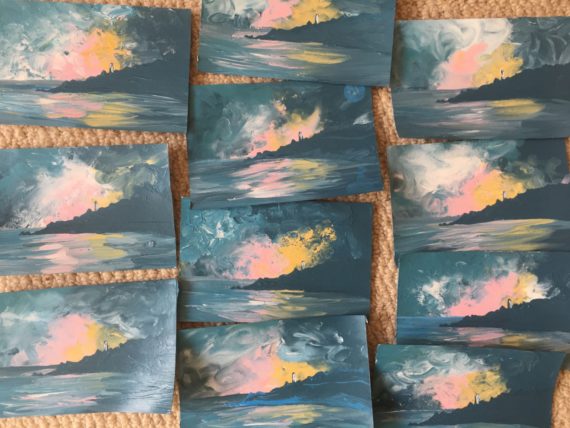 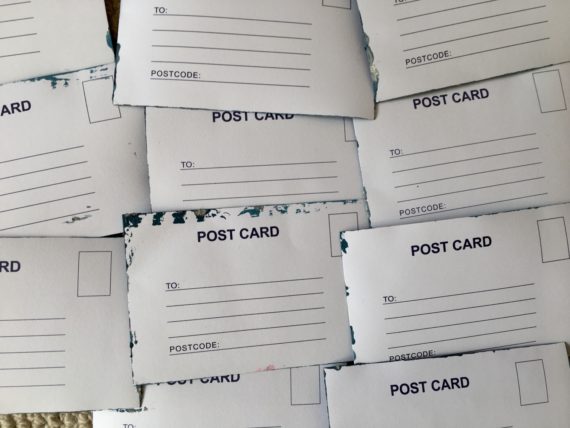 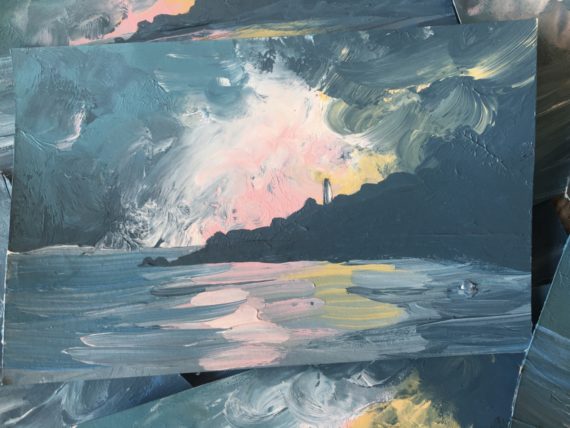 I got told to “eat the world”. I’d planned to go to Glasgow, or was it Mexico? or praps I’ll just stay home.
Drowning in lungs, like little pockets of pacific.

City folks come down here wearing country clothes. I’ve got red earth in my teeth holes. It scares me half to death that it’s all here, going on, all at once; Paignton Pier and rain out to sea and people, somewhere, sitting in the sun.
Cold summer breeze through net curtains, knock the horse ornaments off the window sill and I’m well aware I’ve got a skull behind my smile.

My home falls to metal and dust; bricks and cement over-rated.

For no reason they took my bike to the skip while I was out – my flying machine – the world expands, streets open into fields peppered with dog shit and stones that look like bone.

Old idols disappoint, and my long hair, slick with blood, crunches under the scissor blades.

All my drawings are for sale.

I haven’t been anywhere much. I stayed on this cold unloving island with glitter on my finger nails and mud under them. Clouds race like liquid landscapes.

Wrestling with exhaustion. Too tired to wake.

Waiting in car parks, witness to petty crime. Smoking dope and drinking vodka in the potato fields. I saw them all, yellow floating fat on the whites of their eyes.
UHT milk and memories of all the old times gone by, drinking in the pubs and walking in the woods and laughing.

Campsites are the wilderness of this wild far-flung fucking landscape, with mowed edges and recycling bins.

The smell of cow shit can still bring it all back.
They took the farm, where’s there to go?

At least we now get some peace.